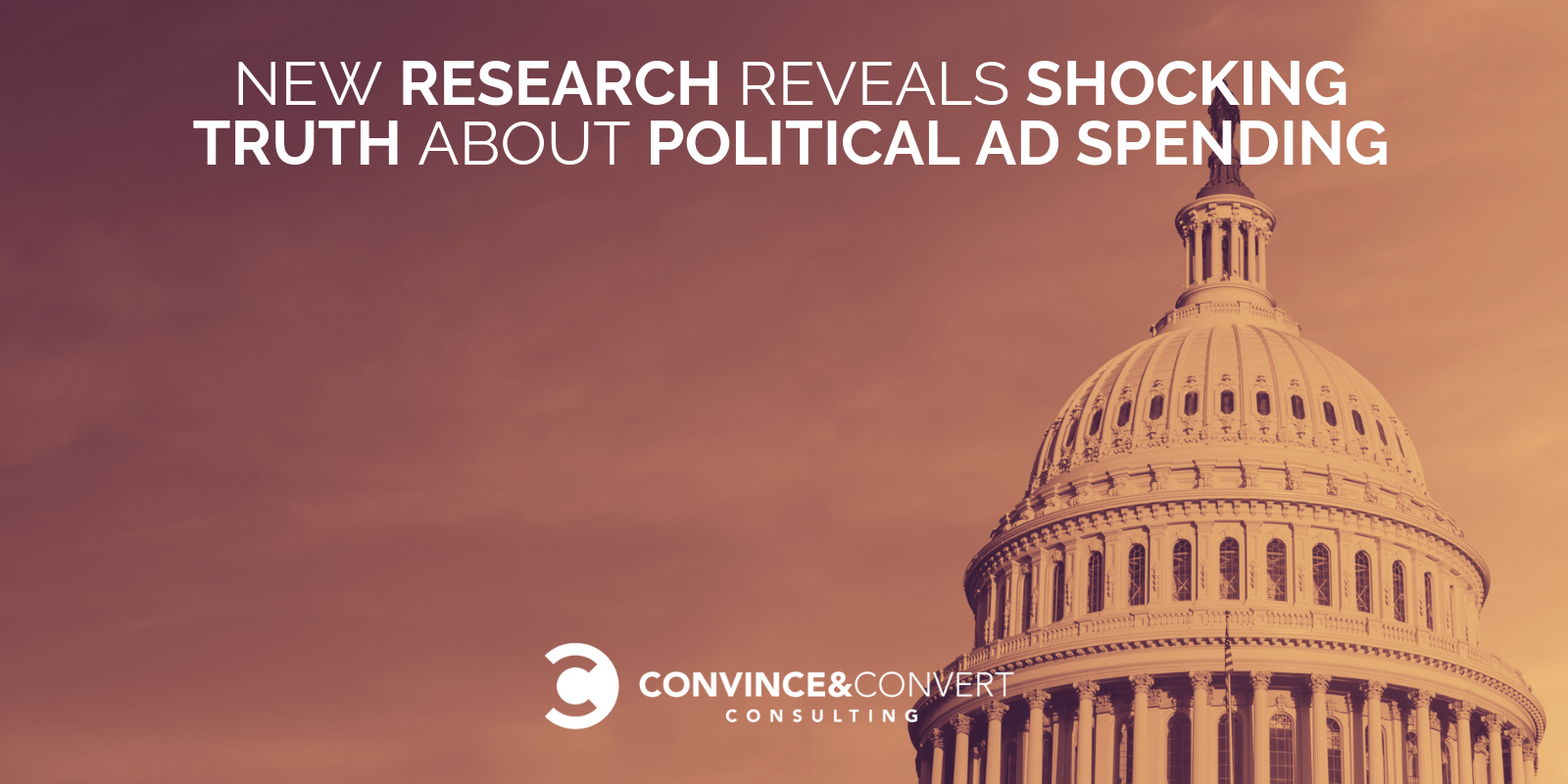 Nearly 8 billion dollars will be spent on political advertising this year, by far a record. Yet all that loot may be misplaced. When I asked 1,001 Americans how they decide what and whom to vote for, advertising was the 7th most impactful source of information. That’s right, 8 billion spent on the 7th most influential driver of voter behavior.

What has a bigger impact on voter behavior? It depends on how old the voter is. Among Baby Boomers, news coverage and personal experience with the candidate are most critical, for examples.

But where it really gets interesting is with Millennial voters. This group is influenced 115% more by word of mouth (candidate recommendations by friends and family) than they are by advertising.

It’s not a huge stretch to say that my new research suggests that political advertising is largely wasted on Americans under the age of 40.

These are just a few of the dozens of statistics and findings in Chatter Matters: the 2018 Word of Mouth Report, based on extensive, proprietary survey data.

We don’t talk about politics much on our blog because, frankly, it’s divisive. Our political climate is wrought with divisiveness and polarity and, as authors, our job is to hopefully give you a break from all of the day’s news by bringing you content that rises above the din of who-said-what-on-Twitter.

But, as Americans, there’s one that that is universal. No matter the political party, the sides of an issue or the stakes involved we love to spend money on political advertising. Billions of it, in fact. This year, political candidates will spend more than 8 billion dollars on political ads in pursuit of their quest to obtain an office or effectuate policy initiatives.

That’s a lot of dough, enough to support a heck of a lot of school improvements, fill a plethora of potholes or provide a much-needed array of services for returning veterans. Our question is: does all that spending on political ads actually change hearts and minds enough to garner a vote in its favor?

We studied this and much more in Chatter Matters, our 2018 word-of-mouth study. We asked 1,001 Americans their opinions on the decisions they make, like purchasing products or voting. We were surprised by some of the results and, frankly, heartened by others.

Overall, based on our research, Americans tend to do more research on their political decisions as they get older. While that’s good (if not great!) news for our democracy, it is not great news for political advertisers. In fact, there’s an inverse relationship to the effectiveness of political advertising and the age of voters.

Political advertising has more than twice as much influence on voters in Generation Z as it does for Americans over the age of 60. Where are older Americans getting their voting information? 7% of Americans 60+ say news coverage influenced their voting decisions, compared to just 30% of Gen Z. For millennials, political ads are also having limited effect: they’re 115% more influenced by word of mouth than by advertising. 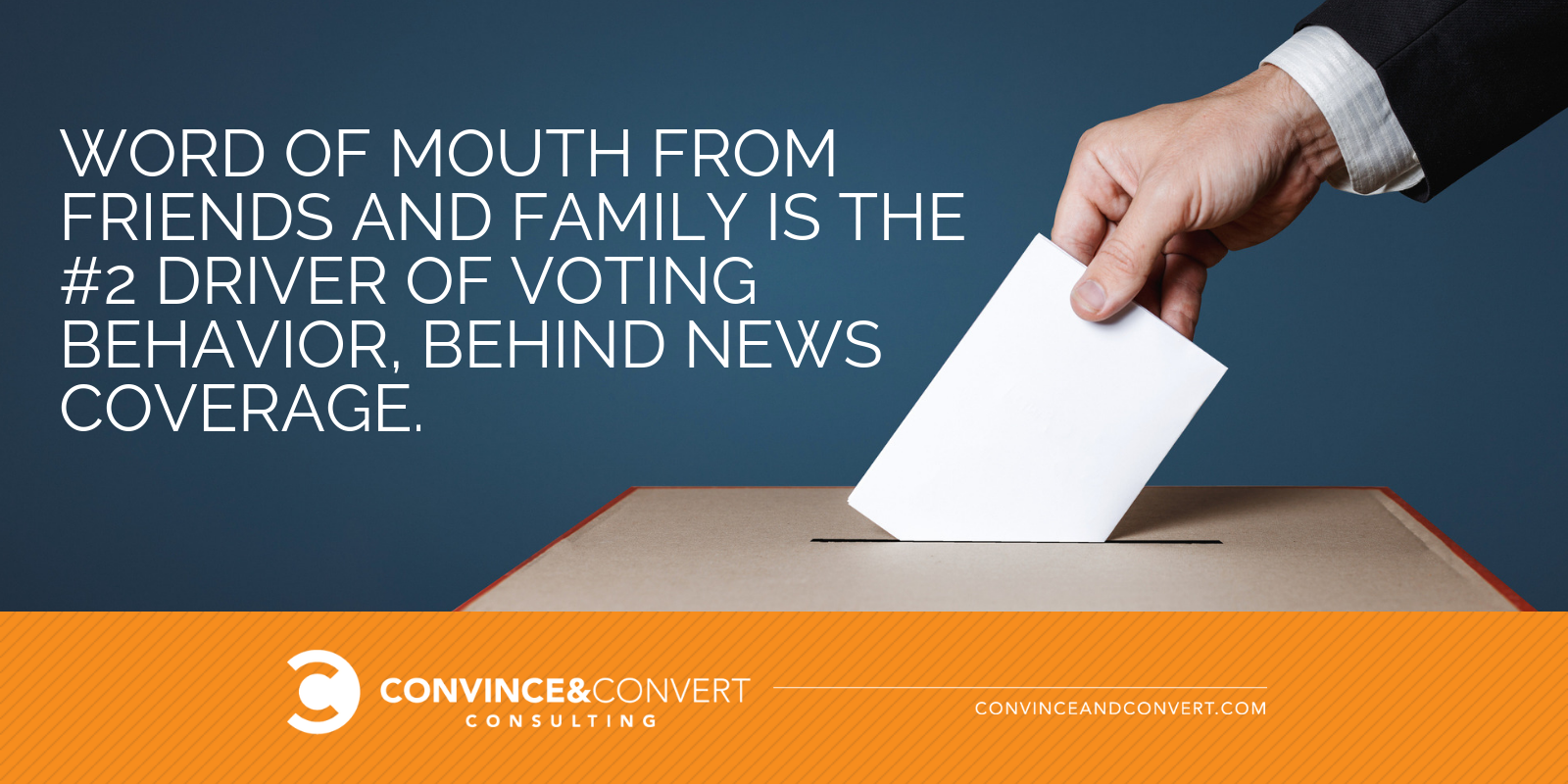 Overall, word of mouth from friends and family is the #2 driver of voting behavior, behind news coverage. Advertising? It comes in a distant 7th. Does this mean that political ad spending money is misplaced? Only the ones spending money can answer that question. But the trend is clear, and for those seeking to reach older voters, it would seem ad spending may have unproven returns.

Word of mouth from friends and family is the #2 driver of voting behavior, behind news coverage. #ChatterMatters Click To Tweet

What makes us talk, recommend, buy, and vote? Find out in Chatter Matters. You can get a free copy of Chatter Matters now. Stay tuned for more videos in this series.

And if you’re looking to learn more about word-of-mouth marketing, my new book with Jay, Talk Triggers, may be just the thing for you.