After countless debates and months of campaigning, the first votes of the 2016 presidential race were cast in Iowa last Monday night.

There were more than 800,000 mentions across all media of the Iowa Caucuses over the last five days. Below, you can see how momentum started to build the day at dawn on caucus day. By 7 P.M. CST, the total mentions volume was higher than any day in the week leading up to it: Early indications showed that turnout for the caucus was high, leading many to believe it would be a good night for Trump and Sanders. Both the businessman and the Vermont Senator lead the way in their respective parties, with Trump receiving close to three times as many mentions as Ted Cruz, and Sanders receiving about twice as much attention as Hillary Clinton: As the polls started to close, the tables began to turn — especially on the GOP front. Not only did Donald Trump come in second place in the caucus, he also lost the mentions race (one of the only times this has happened): 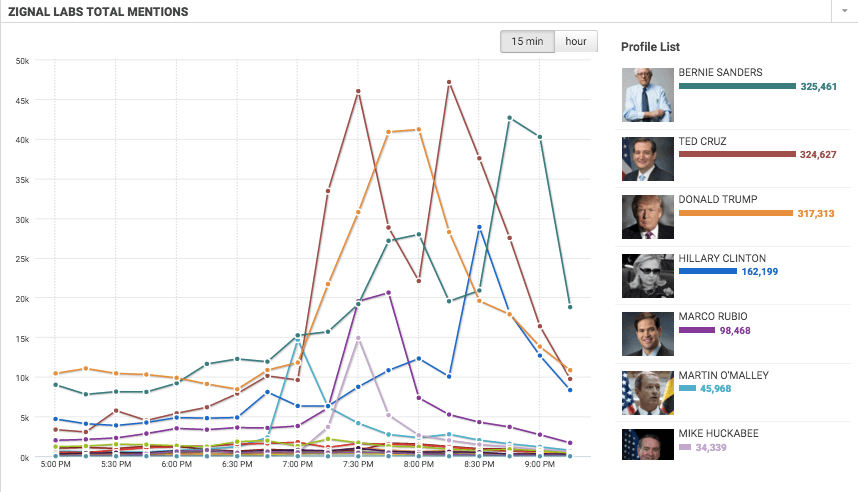 …and the departure of the only remaining Democratic candidate outside of Sanders and Clinton, Martin O’Malley:

Finally, what would our coverage be without a little emoji action?! ???

Here’s a look at the top emojis for each of the GOP candidates throughout the night on Monday:

Note: If you have yet to learn about our NEW Emoji Cloud, you can get all of the details here.

Now that decisions have been made in Iowa, the 2016 election season is officially underway. Stay tuned for Zignal Election insights, as the candidates head to New Hampshire next week.

Business: Tru by Hilton, Coming to a City Near You

At the end of last week, Hilton announced a new affordable brand to complement their international chain of hotels and resorts — and the story is still carrying over into this week’s headlines: Tru by Hilton will be the hotel monopoly’s 13th brand, while serving as its re-entry into the midscale hotel segment. So far, Hilton has 102 hotels signed, and another 30 properties are in various stages of approval in cities such as Atlanta, Houston, and Chicago.

With the launch of Tru, Hilton’s goal seems to be completely millennial-focused: Hilton CEO Christopher Nassetta is confident in the younger market being attracted to Tru, stating, “I ultimately think this will be our biggest brand over time.”

A side-by-side comparison of the two brands, shows AC Hotels is leading in mentions: However, the awareness of AC Hotels could merely higher because the brand has been around longer and more people are familiar with the brand. As news of the launch and locations of Tru by Hilton continue to spread, it will be interesting to see if Tru’s mention traffic picks up, or even exceeds AC Hotels.