Despite increasing numbers of customers using Twitter to publicly complain about brands, the vast majority of companies respond in the exact same way….with the quiet of contempt. 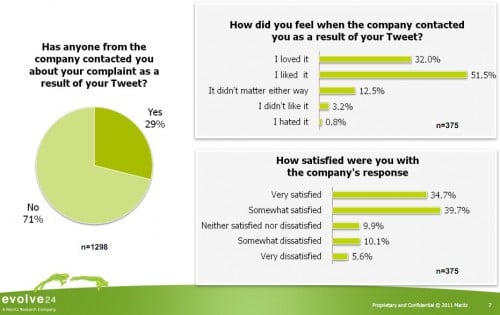 New research from Maritz and Evolve24 of 1,298 Twitter complainants found that only 29% of those tweet gripes were replied to by the companies in question.

This is a dereliction of duty, in my estimation. As we discussed in The NOW Revolution, brands must look at these new channels as the “social telephone” and ignoring these 140 character cries for help is a flawed decision for two reasons.

First, responding to Twitter complaints can turn lemons into lemonade. The Maritz study found that 83% of the complainants that received a reply liked or loved the fact that the company responded. This is irrespective of how, when or why the response came. Think about that. Just the fact that the company acknowledged the problem and showed it was listening improved customer psychology 83% of the time.

“What is striking about these findings is the strong degree to which consumers want to be engaged online to have their issues addressed,” says Anthony Sardella, senior vice president and managing director at evolve24. “They are clearly seeking to have a greater voice in the customer service process and see social media as a streamlined means for resolution of their issues.”

Second, the people that are using Twitter to complain are already disproportionately upset. Previous research from ExactTarget called Twitter X-Factors showed that fewer than 1% of customers use Twitter as their first stop in problem resolution. In almost every case, the people complaining on Twitter are doing so because your company already failed to satisfy them in one or more traditional customer service channels.

Let’s see if I have this right. Angry customers just looking for a sympathetic ear, shouting about it in a public forum. That does not seem to me to be an equation that 70% of companies should ignore.

Why The Social Telephone Goes Unanswered

In my consulting work with mid-sized and large brands, I find two primary reasons why companies purposefully ignore complaints and fail to answer the social telephone.

Fear. Companies literally believe (and I hear this exact phrase all the time) that they’d like to get involved but are afraid the conversation will turn negative in social media, and that answering gives greater exposure to complaints. Here’s the deal. If your company sucks, Twitter is the least of your worries. Social media doesn’t create negativity, it puts a magnifying glass to it. Twitter doesn’t make people more upset, it makes them less upset (if you respond) – especially women 35+ who are disproportionately delighted to get a response on Twitter from a brand.

Resources. It’s true that social media doesn’t close at 5pm, and in fact many customers use social media during the night and on weekends, when it may be inconvenient for you to monitor and reply. But your corporate convenience is not the prism through which you should be gazing upon social business. There was a time when grocery stores closed at 10pm, catalog call centers weren’t open on the weekend, and the only companies that had websites were in porn. But the world has changed – not to throw a wrench into your carefully crafted staffing and resource allocation model – but because the needs and desires of your customers have changed.

This isn’t that hard. This is not out of reach for 70% of companies. You need to listen, respond, and triage. I know they just look like tiny little heads floating across your computer, but these are real people. They are your customers. They are pissed off. Your silence is deafening.