5 Lessons From the Best Example of Content Marketing Ever? 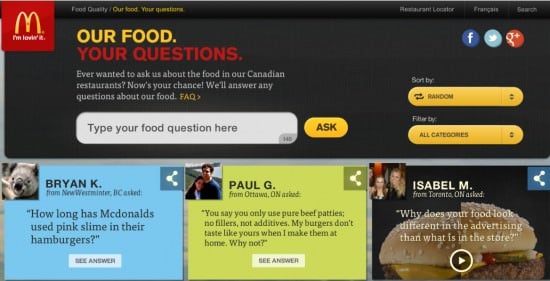 Marketers sometimes say things to me like, “Well, nobody in our industry is doing that kind of robust content marketing, so why should we start?”

It has always been this way. In 1998 when I was a Web strategist, I remember vividly when Amazon.com first rolled out tabbed navigation. This kicked off an entire era of tabbed navigation for sites of every size and category. It didn’t matter whether a competitor in YOUR industry had tabbed navigation, it mattered that a site as prominent as Amazon did, and thus set new expectations.

Going even further back, in 1994 I was working at my first Internet company (Internet Direct, where we invented virtual Web hosting). On October 27 of that year, Wired (then hotwired.com) launched the very first banner ads. Those banners were 468×60 pixels because that was the size the hotwired designer shoehorned onto the home page. And guess what? That became the standard size for the entire World Wide Web, codified by the Internet Advertising Bureau in 1996.

It’s an interconnected world, folks. Your customers are impacted by a lot more than just the marketing tactics of your narrow competitive set. That’s why it drives me crazy when I hear stuff like, “These B2C examples aren’t relevant to us, because we’re B2B.”

That’s why I’m so enamored with the McDonald’s Canada “Our Food, Your Questions” program. It doesn’t matter that you’re probably not working for a fast food company, the Golden Arches’ embrace of information could be the start of a cultural change that impacts every business. That’s why it’s a core case study in my forthcoming new book Youtility: Why Smart Companies Sell More by Selling Less. I interviewed Joel Yashinsky, CMO of McDonald’s Canada to get the inside scoop.

The book won’t be out until next year, however (stay informed at jaybaerbook.com). So, I’m spilling the beans on the McDonald’s example here on Convince & Convert.

Launched in June, the Our Food, Your Questions program invites any Canadian to ask any question whatsoever about McDonald’s food on a special website developed by Tribal DDB Toronto. To ask a question, participants must connect with either Twitter or Facebook, providing social visibility and a ripple in the pond viral effect.

The program scope is only around McDonald’s food, so questions about non-food topics are directed to other resources, and some questions are of course duplicates. But there’s no dodging the tough questions, and that’s the amazing thing about this program.

For example, this zinger from Jani S. in Nova Scotia: 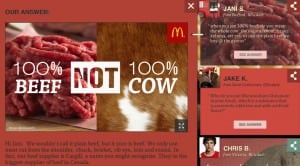 “When you say 100% beef, do you mean the whole cow: the orqans, snout, brain, kidneys, etc. or just the plan beef we buy at the grocer?”

Whoa. Historically, companies would do whatever possible to put as much distance as possible between themselves and that line of inquiry. But the rules are changing. Here’s McDonald’s answer – comprehensive, factual, and not laden with artificial marketing hype:

“Hi Jani. We wouldn’t call it plain beef, but it sure is beef. We only use meat cut from the shoulder, chuck, brisket, rib eye, loin and round. In fact, our beef supplier is Cargill, a name you might recognize. They’re the biggest supplier of beef in Canada.”

5 Lessons for Your Company From McDonald’s Canada

There are so many smart elements to this program, that you literally could write a book just on this case study. Here are the top lessons.

1. Embrace Self-Serve Information
Google’s Zero Moment of Truth research (also a big part of my new book) finds that consumers need twice as many sources of information before making a decision today than they did just one year ago.

McDonald’s Canada understands that there is a huge amount of chatter about their food (and more every day due to proliferation of social). They can’t respond to it all individually, so instead they’ve built a one-stop information shop.

We have to use the channels that we own so that we could have a conversation with customers, because there are so many different channels out there that we just can’t physically reach all of them. – Joel Yashinsky, CMO – McDonald’s Canada

2. Make Information a Spectator Sport
Could McDonald’s Canada have created a big effort around emailing questions, or building a new food-oriented call center, like the Butterball Turkey Talk-Line? Sure, but those options don’t have the benefit of answering questions publicly.

I especially like that they provided an option to “follow” a question, and be notified when it has been answered. More than 3.1 million questions have been read, versus 16,000 asked.

3. Identify Customer Knowledge Gaps
Before the program commenced, McDonald’s Canada conducted a thorough chatter analysis to determine what types of questions were already being asked online about their food. This helped identify the types and categories of questions that were likely to be asked on the site, once unveiled, and enabled McDonalds’s to get the gist of about 600 answers ready in advance.

But, there are still plenty of kooky outlier questions, such as this beauty: “I love your food, but why do your fries get cold after 1 or 2 minutes?” This one is unanswered so far, and I’d be tempted to go with “Air.” 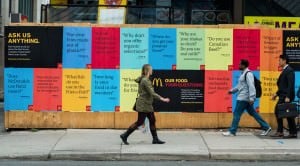 It’s not only the incredible amount of staff time now being devoted to question answering, but McDonald’s is also putting forth substantial dollars to promote this program offline. An innovative and interesting mass media campaign that includes TV, radio, print, and a variety of outdoor executions is in full swing, and is driving awareness of the website and its contents.

This is a very important trend that I’m seeing more and more – companies promoting information instead of the company itself.

5. A Skill, not a Job
Being great at transparency and information isn’t (and cannot) be one person’s job. It must be part of many people’s responsibility, because everyone in your company has information and knowledge that your customers will value.

At McDonald’s Canada, they’ve enlisted help from their entire supply chain to help answer questions, not to mention the dozens of employees and agency participants.

You Can Do This, and Eventually You Will

I asked Joel Yashinsky why every company isn’t doing something similar to Our Food, Your Questions. Here’s what he said:

I think everybody’s going to start. We knew that there was really no option if we were going to become a brand of the 21st century, as we were of the 20th century. The customer today wants to know more, especially about the food that they’re eating.

If you have a good story to tell, tell it. But you have to do it in
a way that’s authentic, and you have to have that conversation
with the customer. You can’t just preach to the consumer these things that you know are true. You have to engage them, so that they can come to learn it and believe it and build that trust with you.

Note: I worked at McDonald’s as my very first job, as a 15 year-old Arizona teen. Spent 2 great years there, and learned stuff I still apply today.