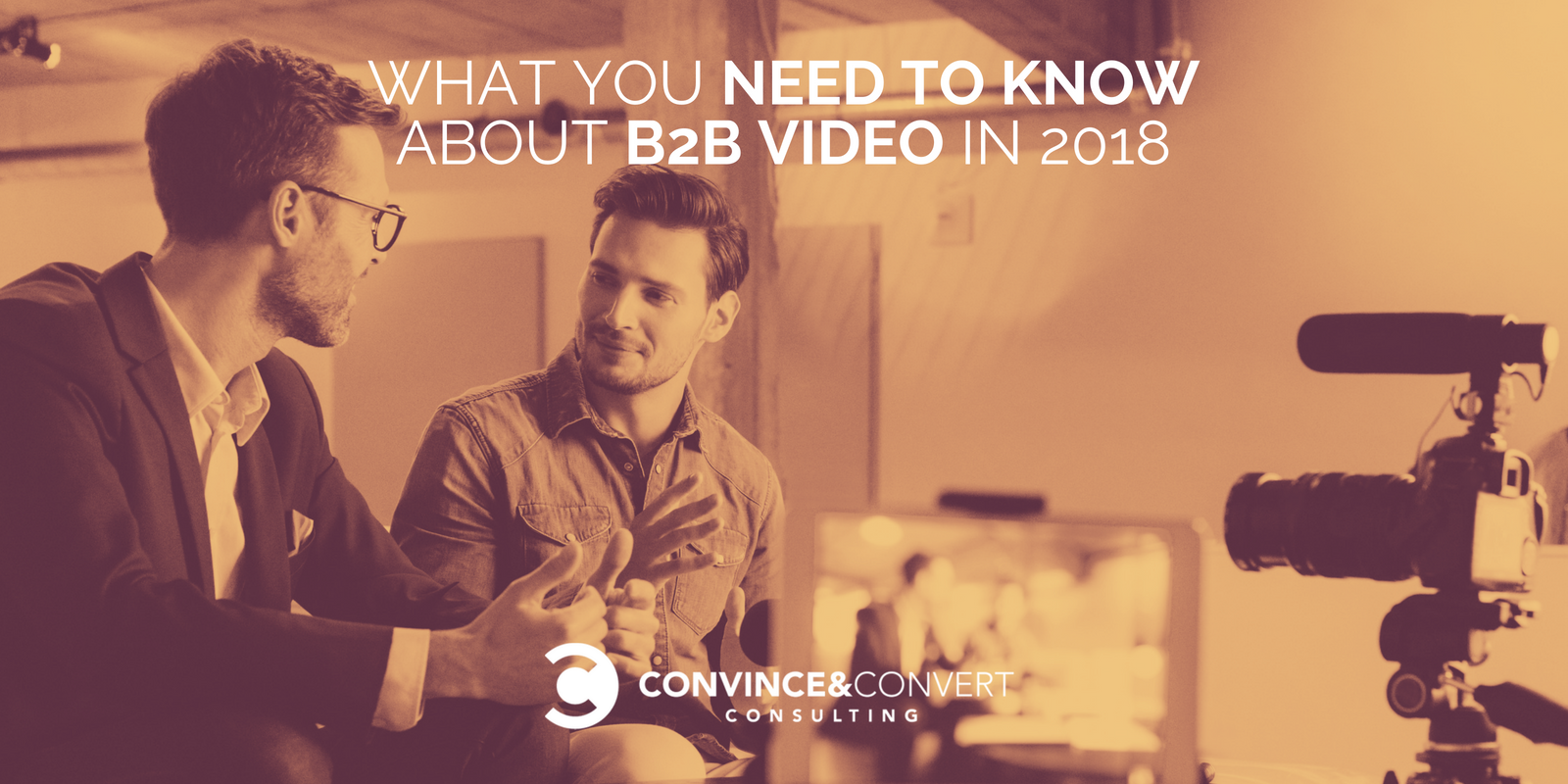 You know that video is an essential part of your overall content marketing strategy. Vidyard’s 2018 Video In Business Benchmark Report takes an in-depth look at how the corporate sector uses video in sales and marketing.

The research represents more than 600 businesses and over a quarter-of-a-million videos analyzed over a one-year period. The findings do not include organizations that monetize video content or produce it as the primary aim of their companies.

Here are 6 key things you must know about video, straight from Vidyard’s benchmark report.

1. Most People Use Desktop Browsers to View Business Videos 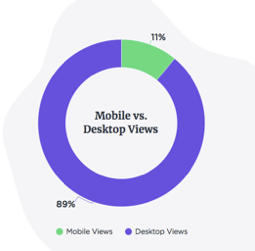 Specifically, 89 percent of business-related videos were viewed on desktops, with only 11 percent of them seen on mobile devices.

Why It Matters: Platforms like Instagram’s IGTV cater to people who want to watch videos on their phones, and brands are indeed taking advantage of the relatively new platform. However, this statistic proves how essential it is to make sure your marketing team isn’t putting too much of a focus on video for mobile users.

You may even want to capitalize on the finding by creating videos that are especially impressive when viewed on larger desktop screens, or those featuring minute details that viewers might not notice — or at least fully appreciate — on smaller screens.

2. B2B Viewers Are More Likely to Watch Your Content on Weekdays, Not Weekends 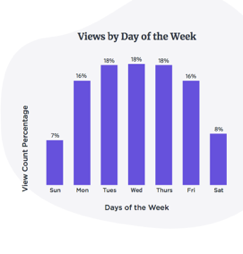 Considering you’re learning about a report covering business videos and many people have weekends off, it’s probably not surprising that only seven percent of view counts occurred on Sundays, and the viewership is merely a percentage point more on Saturdays. In contrast, 18 percent of views happened on Tuesday, Wednesday or Thursday.

Why It Matters: You may assume that because people often have more free time on weekends than during the week, they’ll use it to view your videos, but this study contradicts that notion.

If you have a team of marketers working on video content during the weekends, it’s not ideal for them to post the material during those times. Instead, they should make sure the videos are ready to go no later than Thursday for optimal viewership potential. 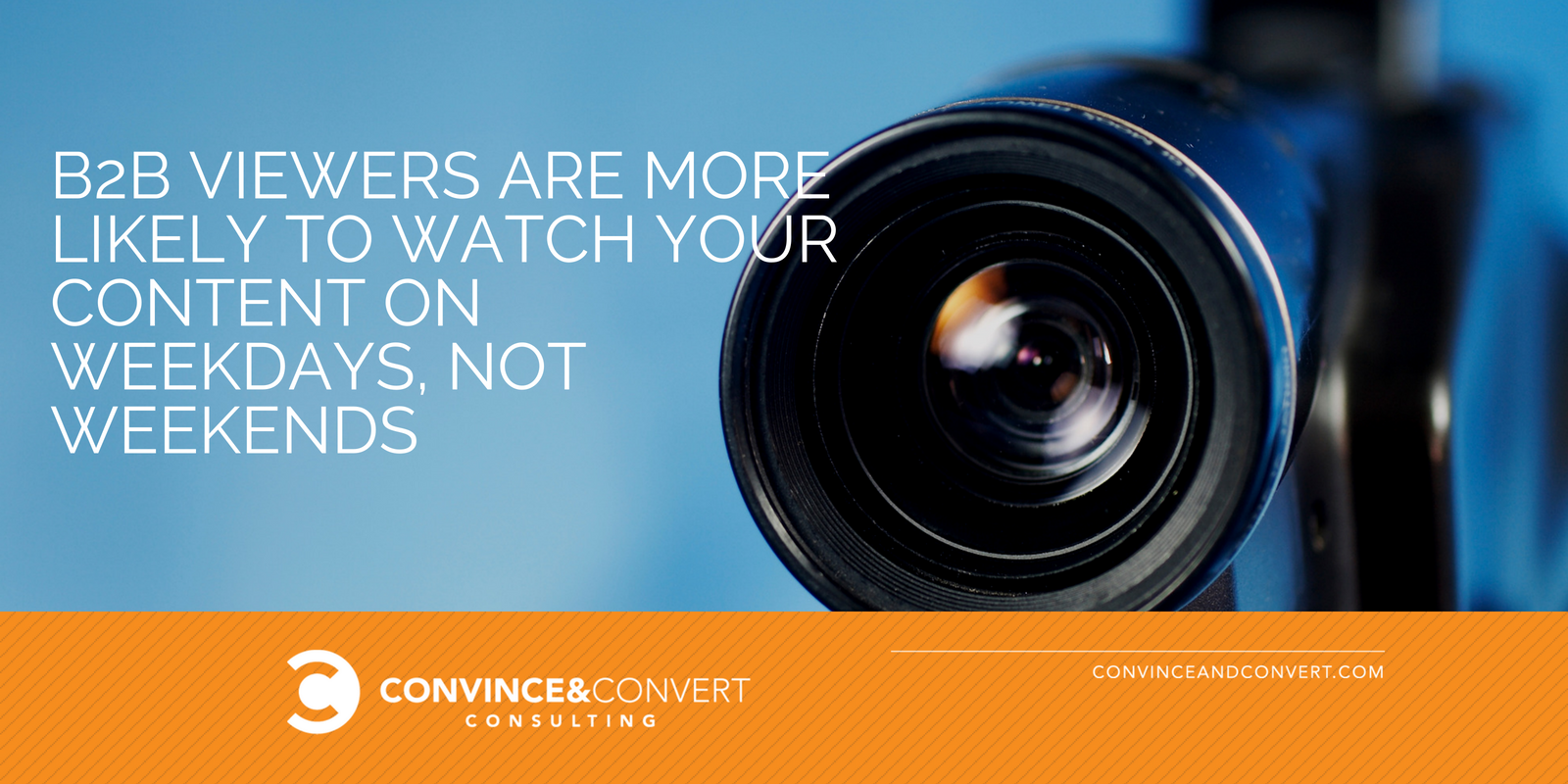 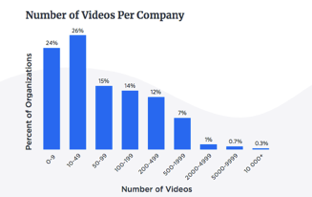 A look at all organizations represented within Vidyard’s dataset found that the average number of videos published by an organization was 377 — equating to more than one per day throughout a year. Notably, the average amount calculated last year was only 293, indicating significant growth.

Why It Matters: The uptick likely means that companies are choosing to experiment more when creating video content. While they may have usually distributed text-based content in the past, they’re probably realizing that videos have verifiable worth in some situations.

However, if it seems like your organization is lagging behind concerning the number of videos it produces, don’t despair. The Vidyard survey found that over a quarter of respondents — 26 percent — published between 10 and 49 videos annually.

Plus, the published videos mentioned in this survey were rarely those with high production values — just any sort of video content a company released throughout the data recording period.

4. Company Revenue Is Not a Barrier to Publishing Frequency

Part of the Video in Business Benchmark Report examined how much a company’s annual revenue dictated the number of videos they published per month. Not surprisingly, the organizations with annual revenues of more than $1 billion released the most each month — or 30 videos on average.

However, something you may not expect is that companies on the lowest end of the spectrum, or those reporting less than $5 million in annual revenue, published only one video less than that.

Why It Matters: Some smaller companies may feel that a lack of revenue is an unnecessary hindrance that prevents meeting consistent publishing goals. However, the research shows that’s not the case since the smallest companies only publicize one video less than the ones with the most substantial revenue.

If you’re part of a company where budget is a concern, consider creating a mixture of videos with higher and lower production costs, so you can keep using engaging video content to promote your brand without spending too much money.

Now that you know some companies produce dozens of videos per month, you’re probably curious about the most popular type. Vidyard found that businesses most often made videos about their products — such content constituted 63 percent of the total spent on video investments. 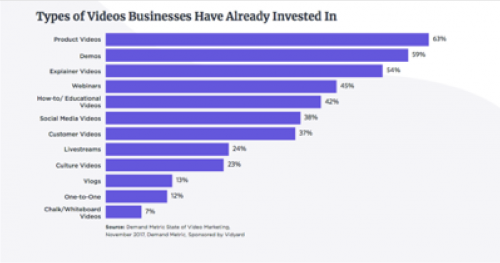 Why It Matters: This finding indicates that companies realize video content is useful for helping customers achieve better understandings about the products they offer. It’s also worth pointing out that the second and third most popular kinds of videos were demos and explainer videos, respectively.

Many people find it easier to grasp the value of something if they can see it in action on a screen instead of merely staring at drawn diagrams or reading text instructions. If you’re trying to market a product that has an outstanding feature or requires a particular user-facilitated process to work correctly, a video could help you highlight it. This practice will boost customer satisfaction due to reduced incidences of confusion from your user base.

Also, if your company hasn’t used video content as a promotional method yet and you aren’t sure where to begin, these statistics suggest looking no further than your products — at least initially. And if everyone is creating product videos, differentiate your organization by creating videos with emotion, too.

6. Three-Quarters of Videos Are Less Than Two Minutes Long 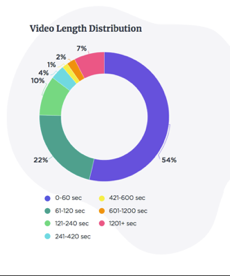 Data showed that 75 percent of B2B videos are under two minutes in length. Moreover, 54 percent of the videos evaluated for this study clocked in at 60 seconds or less.

Don't lose viewers—keep your #B2B videos short. 75% of B2B videos are under two minutes in length. Click To Tweet

Why It Matters: This point suggests that marketers are taking note of people’s short attention spans and know they must be as concise as possible. They also know individuals expect most videos to be relatively short and want to adjust their content accordingly.

If you’re thinking about creating a longer video, weigh the pros and cons of making a shorter one instead — or perhaps splitting the content into a series you publish across several weeks. 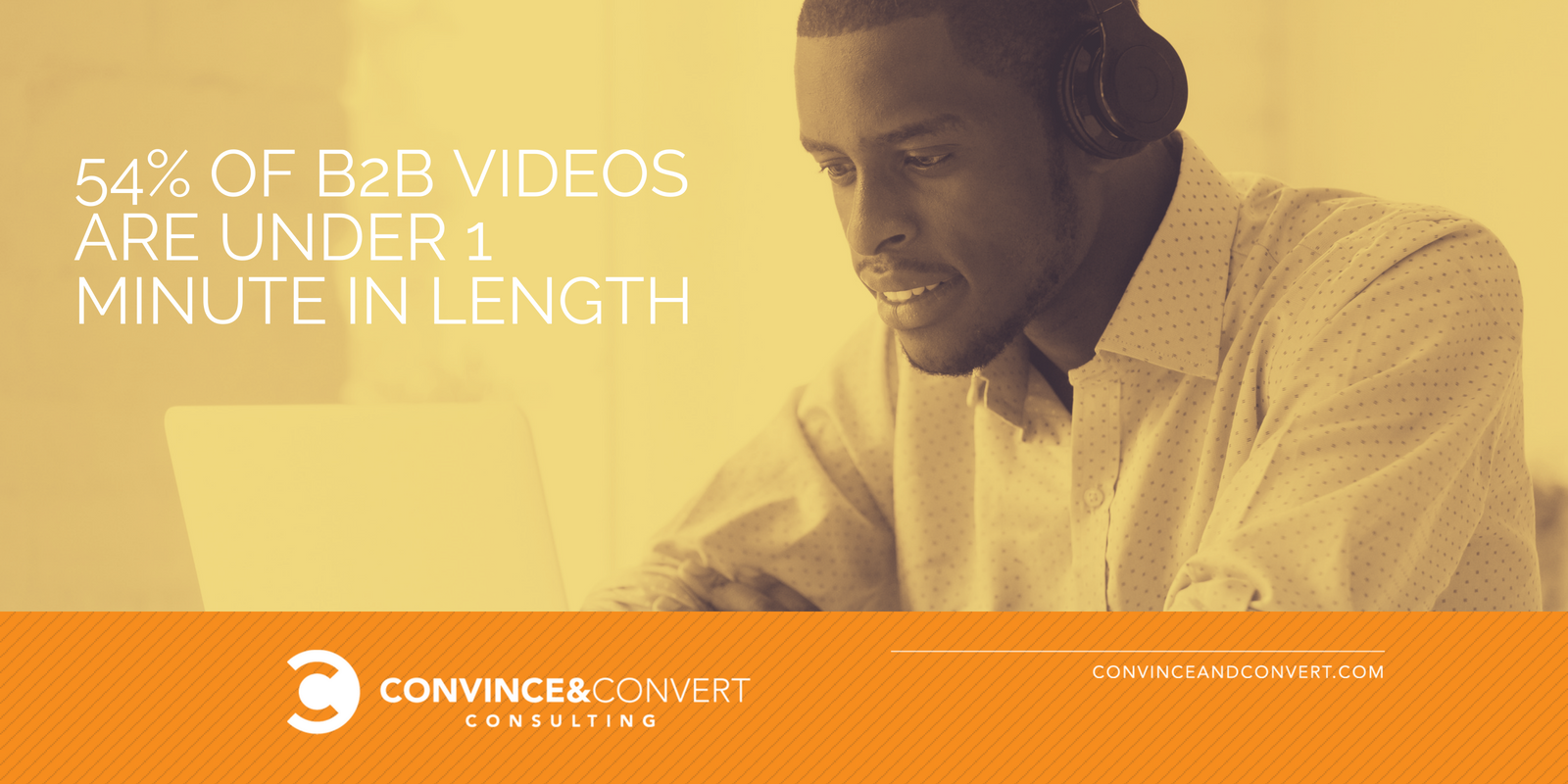 The six findings emphasize the significant evolution and high adoption rates present among businesses that use videos for sales and marketing. Furthermore, the substantial changes between this year and last indicate rapid adaptation to user needs.

If your company hasn’t gotten on board with this strategy yet, now’s the time to start. And if you haven’t already, make sure to download Vidyard’s Video in Business Benchmark report now.

How does your B2B digital marketing stack up?

Effective B2B digital marketing requires a layered approach. Use this tool to benchmark how robust your organization’s efforts are and see the areas in which you need to improve. Get your B2B Marketing Maturity Checklist sent to you via email now. 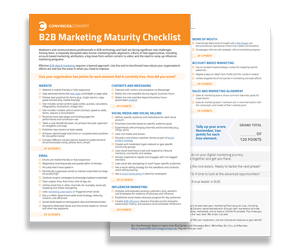