Google, Social Media, and the Wisdom of Enigmas

Guest post by Daniel Lemin of marketing innovation consultancy Social Studio. He provides brands and agencies with the research, insights and good old-fashioned know-how needed to be more effective marketers.

In the early part of my career I was fortunate to land a job on the corporate marketing team at Google. At the time I felt very lucky (pun intended) to be among the 400 employees of a small but well-known and rapidly growing company. Over time it blossomed to one thousand, then several thousand employees but that unconventional spirit remained.

Doug Edwards, one of my early colleagues and head of the corporate marketing efforts, has authored a book about the culture and people behind one of the world’s most unconventional brands. I haven’t read the book yet (it’s not available until July) so I can lay only cursory claim to knowledge of its contents. But there is at least one element of the early Google culture worthy of discussion as it relates to social media.

It starts with Google’s well known idiom of being an unconventional company, a theme reinforced in its filings to go public. The now infamous “don’t be evil” slogan has become something of a lightning rod for criticisms of the company but permeated all of the big decisions. These nuances left the corporate marketing team struggling to support a brand in such a non-conventional culture. After all, how do you drive brand awareness if you don’t do things in conventional ways? I learned one wholly invaluable lesson from those challenges, one that is as relevant to social media as it is to other media: embrace, and never stray from, who you are at that core. Those cultural or product nuances are probably your best asset, and in a noisy social environment will be the thing that allows you to set yourself apart and be relevant to your fans and followers.

A good, albeit not expressly social, example of this principle lies in the first advertising campaign that Google invested in. Those in the Bay Area may remember it well, a cryptic billboard in 2004 along the 101 freeway: 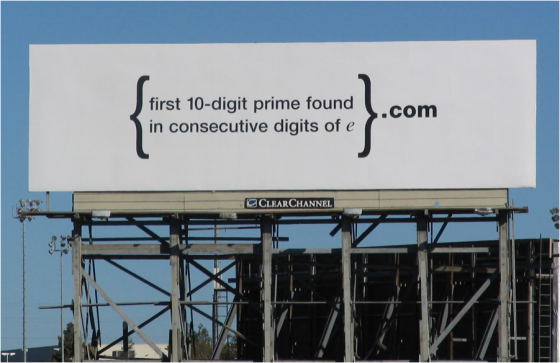 That’s it. Solve the puzzle and you were directed to a landing page with yet another cryptic puzzle and, eventually, to a landing page designed to recruit employees. Only there was it revealed that Google was behind the whole thing. The thinking was like this: if an unconventional company is going to buy advertising, it’s going to do so in a suitably unconventional way. The billboard, as you’ll note, had no branding on it, no multi-colored logo. Just an equation.

This is a principle that many companies overlook when plotting out the content for their social channels. In the race to keep up with competitors they will launch a presence on Facebook, Twitter, YouTube and Foursquare then struggle to fill that gaping void of content with something interesting. They do it because it’s there and, ultimately, many companies fill it their new channels with content that’s not interesting, or hire viral marketing agencies to produce stuff they think will be funny and hope will have some sort of business outcome.

On the other hand, you have the chance to think like Google and use the nuance of your culture as a competitive advantage. What is it that makes your company tick, and what action are you looking to inspire your fans or followers to engage in? Google’s decision was to pique the curiosity of the mathematically-inclined and challenge them, knowing the subtlety of the problem would be noteworthy in itself. That helped fill the recruiter’s inboxes with resumes, a strategic outcome for a non-conventional program. Slam dunk. Of course, advertising pundits had their own opinions about the campaign, but that didn’t surprise anyone.

Google looked within its enigmatic culture and emerged with a quirky idea to fill the recruiting pipeline. That idea broke the convention of the medium but made the most of the opportunity. That was their concept. What will yours be?