It’s Who You Know – Maximizing Your Company’s Social Reach

Put down your guard.

It’s about people, not logos.

These are the two primary tenets of effective social media.

In practice, executing on them requires that you communicate with your customers and prospects across a variety of social media outposts, with significant frequency. (I tell my clients that if you can’t add at least 7-9 legitimately interesting pieces of content to your Facebook page per week, you’re probably not ready to make it a central part of your communications program). 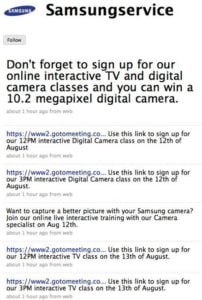 Here’s an example from Samsung and their @samsungservice page, which mixes an occasional customer service tweet with a steady stream of plugs. (I found this Samsung account from a great post by Dan Berlin from One to One Interactive)

If your messages sound like they were created by a robot, you’re failing both the “put down your guard” and “it’s about people” tests.

Use Humans to Humanize

The better practice is to humanize your messaging, ideally by making it come from real humans. That’s why I’m such a proponent of widespread social media and social network adoption in organizations. Each person in your company or agency has a social graph, connecting them with dozens or hundreds of people.

Unless you’re a very large and popular brand, a catch-all corporate social media presence dramatically truncates your influence because it crams the social graph onto a single, one-lane road, instead of capitalizing on the unique connections possessed by each member of your team.

In addition to involving more people in your social media outreach efforts, broaden the areas where that outreach occur. WAAAAY too many companies are putting all of their eggs in the Twitter or Facebook baskets. True, Facebook has 250 million global users, which is probably a couple more than come to your corporate Web site every day, but there are definitely members of your customer base that are not on Facebook. In fact, of my eight closest friends that are not professional marketers, only two are on Facebook, and one joined last week.

Create social media teams in your company that enable individual employees to participate in the communities they prefer, in the fashion they gravitate towards. If you have writers, let them old school blog or use Tumblr or Posterous. If you have folks with something to say but who aren’t ready or able to write blog posts from scratch, put them on the blog commenting team. Some people are better speakers than writers. Those are your video bloggers. Shutterbugs? Have them jump on board with Flickr. Local cognoscenti? Check out Foursquare or other location-based apps. Music fans should head to MySpace. And of course, some people should be on the Facebook, Linkedin and Twitter teams.

Pulling on the Same Rope

Of course, your employee participants are going to mix their personal lifestream with messages about the company. That’s the whole point, remember? It’s about people, not logos.

But, what I often find with companies I help with this decentralization process, is that employees (once unshackled) don’t know what to say about the company. So, to give yourself a modicum of certainty that your people won’t massively mischaracterize the company in social media, and to give employees an idea of WHAT to say, I recommend a “Message of the Day” approach.

The Message of the Day concept stems from my background as a political campaign consultant, and study of Michael Deaver’s work as the craftsman of Ronald Reagan’s message strategies.

Certainly, you can’t enforce campaign-style message discipline in social media, nor should you try. But, a small cross-functional team within your organization should meet every day at 4:55 for 5 minutes to determine what might be legitimately interesting to your customers tomorrow. Out of that meeting should stem the Message of the Day for tomorrow.

Disseminate the MOD to all social media active employees, first thing every morning. I prefer using Yammer (a private, internal Twitter-like application) for this, but a group email list will suffice, too.

The MOD needs to be 120 characters or less (remember, The Elevator Pitch is Dead), including if applicable, a shortened URL preferably set up to be tracked via Bit.ly, Hootsuite, or BudURL.

Once receiving the MOD, employees are free to modify it to fit their own style and social media outpost (you may want to provide MOD visuals for employees active in Flickr and Facebook). Or, if it doesn’t feel authentic, if it doesn’t feel like something they WOULD ACTUALLY SAY IN REAL LIFE they should be encouraged to ignore that MOD.

The MOD is in place and working well for several of my clients. Are you ready to try something similar? Are you already?