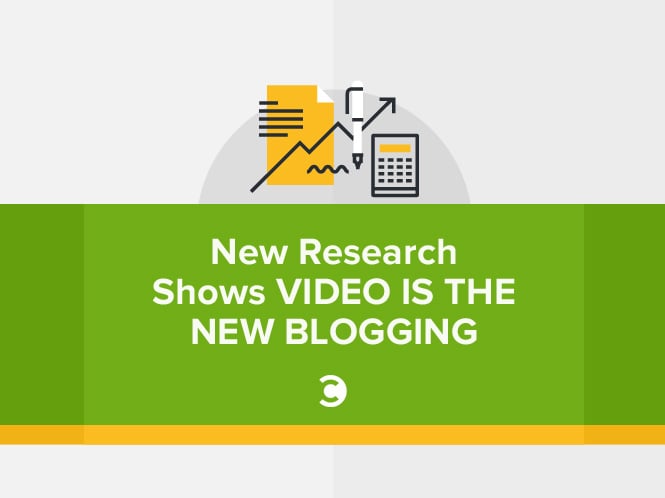 As an author, it breaks my heart, but we are entering the “no-read” era.

Every year, I think there is no possible way online video consumption can climb again, but it does. And finally, content marketers are catching up to the consumption trend.

Video for content marketing used to be a sometimes thing. An occasional deviation from tried-and-true blog posts. But now, for many companies, video IS the new blogging.

New research from Vidyard (a great partner of ours at Convince & Convert) called the “2017 Video in Business Benchmark Report” (free download) put math around this shift.

According to their survey, on average, businesses are creating 18 new videos per month. That is almost precisely the same cadence as a weekday blogging schedule.

Brian Halligan, CEO of Hubspot concurs, stating recently that he believes 50% of a company’s overall content marketing initiatives should be in video.

Other data points from the study underscore the “video is the new blogging” hypothesis:

This is the video equivalent of the scannable listicle and infographic trends that have been part of blogging for the past several years, and also a nod to the reality of the power of social media to change our collective perceptions of long vs. short.

And this move to shorter video is strategically wise, according to Vidyard’s report:

This compares to just 10% of viewers watching all the way through for videos that are 30 minutes or longer.

(note: this is a major reason why my team and I at Convince & Convert are moving many parts of our Webinar series to Webinines: Webinars that are 9 minutes or shorter. See this example I did with Vidyard about the 5 ways to use video for lead gen).

Also similar to blogging is the fact that a handful of videos are responsible for most of the views. On the Convince & Convert blog, approximately 90% of our page views come from 10% of our published content. Video is mimicking this dynamic:

Mid-sized companies lag behind on video content marketing adoption, at least for now.

Whether you’re all-in, or just partially in (for now), spend some time reviewing this new report from Vidyard. There are literally three dozen more data points that I didn’t cover here.

(and speaking of video, did you know my Jay Today video series is BACK!? Twice a week. Three minutes per episode. It’s like video espresso, if espresso was about marketing and business. JayToday.TV to subscribe, or catch it on my Facebook page. We also publish one episode a week here on the blog.)