The Chicken and the Egg Social Media Conundrum

There are many ways social media differs from traditional marketing. It’s approachable and human. It’s a two-way dialog, rather than unilateral declarations. It treats the customer as a teammate, rather than a target.

But there’s another big difference. In social media, the audience comes after the message, not 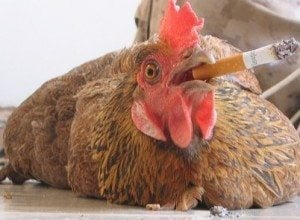 Remember that when you buy a print ad, or billboard, or print a direct mail piece, or buy radio time, or banner ads, or bus benches, or hire a skywriter, you are doing so because you have some idea of how many people will see your message, and that they are theoretically folks that give a whit about your company.

Social media is the exact opposite.

You decide you want to join the conversation on Twitter, Facebook, YouTube, your blog or wherever, and you start with an audience of zero. The audience accrues based on the quality and authenticity of your message.

Thus, there are really no shortcuts in social media. Sure, you can produce more content, or tweet about it with greater frequency, or be smarter about SEO, or craftily link your social outposts together. But all of those just make a good social media program better – they don’t guarantee you an audience.

And the more I think about it, the more I believe that’s why some marketers have trouble wrestling and conceptualizing social media. Our attention and loyalties are no longer for sale the way they historically have been. In social media, you can’t open up your Arbitron report and figure out which stations will reach your target audience, and write your check and be on drive time in a few days, distributing your message widely.

As Brian Solis puts it so well, we now earn the relationships, trust, and reputation we deserve.

There’s a lot of people out there trying to figure out how to game the system. How to find the secret social media loophole that enables you to grow an audience like a chia pet without having to work at it. I don’t think they’ll find their magic beans, and I hope you don’t let them keep trying.

Yes, it’s hard. Nobody ever promised social media was easy, just that it was fun, and effective. But, unlike every other marketing tool for the past 200 years, it’s a meritocracy, and that benefits us all.

I just started noodling this concept of audience coming after the message the other day. Will you help me think it through in the comments?