4 Adjectives That Should Dominate Your Email Subject Lines 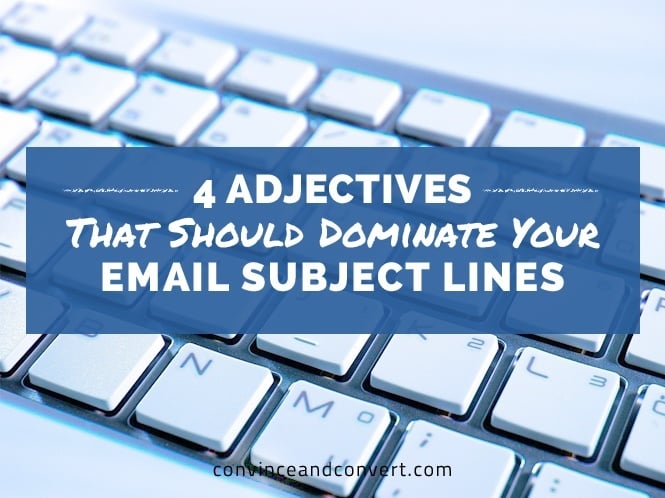 David Ogilvy once famously observed that since five times more people read a headline than body text, once your headline was written, you’d “spent eighty cents of your dollar.”

But with email subject lines, it’s the whole buck. If your subject line doesn’t grab a reader, pull them in, and motivate them to open the email, it really doesn’t matter what the email says, what it offers, or how well-designed it is. It’s just one more unopened email.

Understandably, then, email subject lines are the subject of a lot of analysis and examination.

There are some basic best-practice tips that you already know all about: Keep it short, be specific, use names whenever you can, and don’t spam. But once you’ve done all that, you still need some new angles. Try these.

Subject: How to DOUBLE Your YouTube Views (and a giveaway!)

Adding figures to your subject line is a great way to add credibility and authenticity. It’s also an excellent way to short-circuit the process of good writing: Use hard facts and specific examples so people can visualize them. Use vague descriptions, and it’s less punchy, more forgettable, less credible, and harder to visualize as real.

If you’re trying to sell someone on a benefit, the more tangible it feels to them mentally, the better.

There is one trouble here, though: Using some over-precise technical figures and terms is going to put even an interested, qualified audience into a prolonged siesta of boredom. No one wants to look at more statistics.

The Extreme subject line gets around this by delivering a benefit that’s slightly difficult to credit: double your income in three months. Really? A 400% increase in clickthroughs? That sounds hard to believe, but apparently the evidence is just a click away, so let’s find out.

And if you’re in the middle of a long, established, trust-based, client-supplier relationship with the recipient of your emails, then when you tell them you’ve got this fantastic benefit, they’ll believe you—and they’re even more likely to open and click through.

James’ subject line is particularly great because it has the chutzpah to use those bold caps on “DOUBLE” paired with the more B2B caps-throughout style across the rest of the subject. And on top of kicking you up the rankings on the world’s second most popular search engine, there’s a giveaway? I’d open that. Wouldn’t you?

Hey. What’s up? How’s it going? No rush. Chill. Just saying, if you have a second, I thought you might want to…

Whatever you think of Barack Obama (and the fact he’s been elected president twice means that, statistically, you’re probably in favor), his social media and email campaigns are masterful.

This is a great example of an insouciant (that is, chilled out, almost careless, supremely relaxed and self-confident) subject line. In an inbox full of “HURRY!!!!!!” and “You DON’T want to MISS OUT on this!!!” subject lines, Obama’s combination of authority and insouciance is a breath of fresh air. And it makes you think, “OK, Mister President, let’s chat.” Hey, Barack, what’s going on?

It takes a lot of nerve to use a subject line like this, and it works best if you’re bringing the authority of a well-known brand—or, you know, POTUS—to the table. But even an unknown can swing it if you hit the right note.

It’s always about making the reader an invitation. But an insouciant subject line is turning to someone in a noisy, crowded club and inviting them to have a quiet conversation in the VIP. The implication—the subject matters, the person asking is important, and they think a lot of you—is difficult to resist. And the tiny “Hey” stands out visually in an inbox of much longer subject lines.

Subject: Your Marketing Sucks: Why You Need to Think Local

This one’s more about drawing a battle line in the sand. It’s done either by talking about another group in a negative way, or more effectively, delivering a bracing critique directly to the reader. Lines like, “Your smoothies suck. Here’s how to fix that,” are classic examples of the genre.

This method thrives on creating discord or a challenge, then offering to solve it—in the email. It’s like a story in miniature, with the last chapter only available if you open the email, and everyone’s instantly emotionally invested in how the hero gets out of this one, if that hero is them. So subject lines like, “your emails are all totally unsecured,” (probably true, by the way) are effective on a personal level. They also introduce a problem or identify a pain point, then offer a solution that’s relatively easy—classic sales copywriting, condensed into a 40-character subject line.

Subject: How’d You Get So Weird?

Humor works on two levels, appropriately enough: It makes you laugh, which means you’re having a positive experience while you’re reading the subject line, and it holds you there while that happens, which increases the likelihood that you’ll open it.

But there’s something else going on, too. Idiosyncratic humor is a profound way to increase group identification. That can take the form of using quotes from things only some people will be familiar with.

“Defense Against the Dark Arts: ESAPI” invited folks back in 2012 to a course on using enterprise API to defend their sites against hackers. But it works a whole lot better if you get the Harry Potter reference.

GoldFire Studios’ “Do gamers dream of HTML5 sheep?” references the source text for Blade Runner. So when you’re using subject lines like these, you’re trading on the laughter of recognition—and the pleasure of self-recognition. You’re saying, “I’m like you; we both get these jokes, because we know the same things.”

Captivating subject lines that work for many different spaces and audiences top ones that need a great brand-customer relationship to already be in place. Use these ideas can build up that relationship, first—by getting opened, of course.