What BP Can Learn from Umpire Jim Joyce

We don’t ask for much, really. We may be the least vindictive, grudge-holding society ever. For the most part, we’ve forgiven Tyson, Clinton, Nixon (my father-in-law is still a hater), Tylenol and about 63,157 other transgressions. We’ll forgive Roger Clemens. We’ll be okay eventually with Mel Gibson. Same thing with Marion Jones. And Tiger.

But if you want the healing process to accelerate, if you really give a damn about how you’re perceived in America, it all starts with just two little words: “I’m Sorry.” 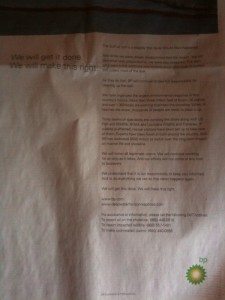 This morning, I opened USA Today to find a full-page ad from BP that earnestly promises that they will make it all better. That they will “…continue to take full responsibility for cleaning up the spill.” (as if they were thinking about pinning it on Halliburton, or global warming, or that evil Chucky doll, but shelved that plan)

They’ve apparently set aside $500 million to “watch over the long-term impact” – which is both a curious and vague turn of phrase, and a dollar amount that’s hard to quantify. Given the scale, is that a lot? Not enough? Who knows?

Close, But No Cigar

But the one thing the BP ad doesn’t do is say “I’m Sorry.” Here’s the closest they get:

“…a tragedy that never should have happened”

“deeply disappointed” (about the failure of the top kill, not the spill itself)

“…our responsibility to keep you informed. And to do everything we can so this never happens again.”

The whole ad just came off as incredibly insincere and self-serving.

Contrast that with the guts and class (and good crisis management sense, despite having zero PR counsel) shown by umpire Jim Joyce in the immediate aftermath of his blown call, robbing Armando Galarraga of a rare perfect game.

Within minutes of the conclusion of the game, Joyce (having seen the replay proving him dead wrong) tracked down Galarraga in the clubhouse to apologize. He also apologized to the manager, Jim Leyland. Joyce then faced the media (which is not required by MLB rules), and tearfully said:

But Joyce’s owning of the issue gets even better. Not only did he deny MLB’s offer to skip today’s game, he met with the media AGAIN for more questions, putting on and taking off the verbal hair shirt about 50 times, until he was again in tears.

And he wasn’t the only one in tears in Detroit today when Armando Galarraga delivered the lineup card before the game, triggering a cathartic standing ovation at Comerica Park. 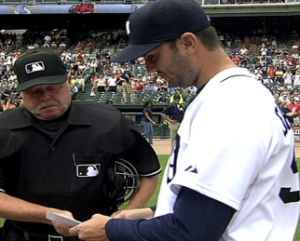 Even in the worst of times, a simple, straightforward apology and genuine remorse can make us cry. That’s how much we are wired to forgive.

We’re crying about BP too, but for a whole other reason.

Billions of dollars. A coven of PR practitioners. And they can’t get just two little words right.