If you’re reading this, you probably had little doubt about the power of the populace – armed with social media – to profoundly impact the behavior of companies. But, if you had even a scintilla of suspicion that it wasn’t true, it should have evaporated this week based on these two events.

You Gotta Fight For Your Right to Free Tacos

Since 1994, regional Taco Bell restaurants in East Lansing, Michigan have supplied free tacos to anyone with a ticket stub to a Michigan State basketball game when the hometown Spartans scored at least 70 points. Similar to hating both Michigan and winter, the “We Want Tacos” chant is a part of the modern MSU college experience.

But then it was gone.

Taco Bell corporate decided – against the wishes of the East Lansing franchisees, evidently – to end the successful promotion during a season when MSU is ranked #1 in the country. Reasons were not disclosed, and the very fact that the promotion was not in play this season was not well-circulated, as long lines of fans looking for taco handouts queued up at area locations and spawned social media ire:

But then, bowing to pressure from taco-loving students, Taco Bell reversed course and renewed the sponsorship.

We’ve been able to work with the local Taco Bell franchisees and come to an agreement to maintain our sponsorship. The promotion is back, and the students will have tacos. — Scot Schlesinger, MSU Assistant Athletic Director 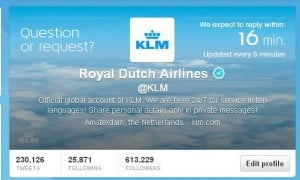 Since Amber Naslund and I wrote The NOW Revolution in 2011, we’ve been saying that social media is the new telephone. Move evidence of social’s burgeoning role in customer service was witnessed last year in The Social Habit research showing:

42% of Americans who have complained about a company in social media expect a response within 60 minutes. (tweet this)

Now, KLM Royal Dutch Airlines is taking that situation to its logical conclusion by updating expected response times to their Twitter page every five minutes! This is just a fantastic concept, and I suspect we’ll see other companies mimicking it, and a software solution crop up to automate it.

KLM is serious about social media customer service, offering support 24/7 in ten languages on Twitter, Facebook and VKontakte. KLM’s social media team handles about 30,000 messages each week, according to a post on their site about the program.

The Faster You Realize You Are Not in Control, the More Control You’ll Have

Especially with the rise in content marketing over the past 18 months, many brands are thinking fervently about how to optimize proactive social media, including real-time marketing programs that feature yogurt congratulating Grammy winners, and other nonsense. Remember that individuals were using social media long before companies, and that social media is still about PEOPLE not about LOGOS. Get your reactive, service-oriented social media program dialed-in first, then worry about how you can better use social in an outbound capacity.

Bravo to Taco Bell for listening, and not being afraid to change a decision. And kudos to KLM for their commitment to social service, and transparency into their process.