3 Ways to Capitalize on the Opportunity Economy

Social media isn’t all about planned campaigns and editorial calendars. In some cases, the best way to make an impact – to win the hearts and minds of customers and prospects – is by being timely, hyper- 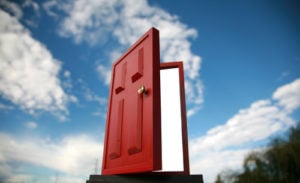 relevant, and individualized. This is contextually appropriate, just-in-time marketing where you find a chance to engage authentically, and you take it. This is the Opportunity Economy, and social media lets you tap into it like never before.

There are 3 primary ways you can capitalize on the Opportunity Economy:

Jay was in downtown Flagstaff, Arizona, and used Foursquare to check in at a local restaurant. Immediately, a message popped up on his iPhone, saying “Since you’re so close, why not visit Tinderbox Kitchen? Named One of Arizona’s Top 25 Restaurants by Arizona Highways Magazine, show this message for a discount on an appetizer.”

Imagine owning a restaurant and then sending a staff member to the adjacent restaurant, where he or she would stand in the bar area and offer coupons to patrons. That type of rifle shot, competitive marketing would be unthinkable in the “real world,” but it happens every minute of every day on Foursquare and elsewhere. The best and most relevant place to interact with your customers is when they are actually transacting with you.

Flint Communication is a full-service advertising agency based in Fargo, North Dakota. One of their clients is SunButter , a spreadable food product made entirely from sunflower seeds. Most of SunButter’s customers have a disproportionate hankering for the taste of sunflower seeds (baseball players, Australian ex-pats that can’t get Vegemite). But another significant potential customer base for SunButter are people with peanut allergies.

A quick check of Yahoo! Answers for “peanut allergies” finds thousands of questions on the topic, with many asking for alternatives. SunButter could credibly answer those questions and introduce their product in a helpful way. That’s the Opportunity Economy at work.

Search engine guru Danny Sullivan describes contextual real-time opportunities as the “anyone know” phenomenon. Searching for the phrase “anyone know” on Twitter unveils a bouillabaisse of inquiries, numbering as many as 1,000 per hour.

“Does anyone know any Volleyball camp or clubs available during summer?” reads a tweet from @scubbasteviee

“Does anyone know where to get cannoli in Tokyo?” asks an evidently cross-cultural @melobubu

“Anyone know a cure that actually works for the hiccups?” wonders @esso, who is subsequently retweeted a dozen times

This is the low-hanging fruit of the Opportunity Economy. Set up search queries for your company on a real-time search engine that reports Twitter and public Facebook results (at a minimum). If you ran a volleyball camp, you could set up searches for “anyone know + volleyball” and “recommendation + camp,” as well as a few other combinations. Then, when it’s appropriate, you can carefully and tactfully engage in a conversation, as long as you’re actually adding to it, not butting in like a bull in a china shop.

Musician Dave Carroll has been widely lauded for his United Breaks Guitars YouTube video that has now been seen nearly 10 million times and takes United Airlines out behind the woodshed for a musical ass-kicking. And while Carroll’s demonstration of the power of a single, scorned customer will populate business textbooks for decades, there’s another, better angle to the story.

Useful and appropriate, the video wraps up with a reminder from Bob that Taylor Guitars’ factory service center can repair all makes and models of guitars, not just Taylor’s. This two-minute video about guitar repair is at 522,000 views on YouTube and counting. How’s that for the Opportunity Economy?

According to Chalisse Zolezzi, Public Relations Manager for Taylor, the company was an early adopter of real-time principles.

“We use social media to provide an inside look of what’s going on at Taylor, and to have a dialogue with our players” she says. “It gives our fans and players a sense of how alive and dynamic the company is, as well as providing an opportunity to connect with us”

The company wisely repackaged content and expertise it already had (a relationship with Dave Carroll, knowledge of TSA rules, and so on) to engage in a valuable, contextually appropriate manner

“We weren’t trying to market,” Zolezzi says. “It was just Bob speaking from the heart. We wanted to offer a video in a timely manner that addressed the issues of interest to guitar players.”

What are you doing to find opportunities in real-time?

This is the fifth in a 7-week blog post series covering themes included in The NOW Revolution: 7 Shifts to Make Your Business Faster, Smarter, and More Social – my new book with Amber Naslund, debuting February 1 (pre-order now and win prizes!).