4 Customer Service Lessons from the Biggest Brands on Twitter 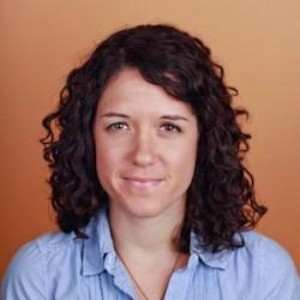 As we learned a few months ago in a recent release of The Social Habit (a social media research project that Jay is working on with Tom Webster, Mark Schaefer, and Jason Falls), customers have high expectations of brands using social to address customer service issue. In fact, 42% of customers expect a response time of 60 minutes or less from brands after they’ve complained about something via social media. In some new research that my team at Software Advice worked on in partnership with CIO.com, I discovered the still-nascent state of this emerging social strategy as tweet after tweet went unanswered.

In a consumer support context, many social CRM systems use sophisticated algorithms to identify, route, and prioritize social help requests in real time. But it’s still up to decision makers to guide these systems to what, when, and how to traffic social mentions. In this article, we delve into what social CRM lessons we learned from the The Great Social Customer Service Race.

How the Customer Service Race Worked

During the first and third weeks, our employee participants used the brand’s Twitter name with an @ symbol. Using the @ triggers a notification to the account owner that they’ve been mentioned in a tweet. In the second and fourth weeks of the race, only the brand name was used.

I consulted with social media experts from Engagor, Conversocial and STELLAService to develop questions they felt should receive a response, based on social media management best practices.

The questions fell into five categories:

The evaluations in the resulting infographic are based on the time it took the brands to respond and the percent of total tweets that received a reply. In addition to the interesting response rates from brands, we also were able to glean 4 important insights on what brands should and should not be doing in social when it comes to dealing with customer service issues:

1. Listen for Your Brand, With or Without The @

We were surprised by the overwhelming lack of response for tweets that did not include the @BrandName. Less than eight percent of responses came during the weeks when an @ was not used, or three of the 40 total responses. Consider this tweet that didn’t receive a response:

The failure of brands to respond to tweets like these leaves a bad impression on me, the customer, as well as on anyone who follows me and sees I didn’t get a response. In this case, even though I was not directly addressing Wells Fargo with an @ symbol, this was a clear opportunity for their team to show they are listening and they care.

Also, listening for mentions without your handle can uncover opportunities to retweet positive feedback for promotional purposes. Consider this message from the race, which wasn’t acknowledged by Starbucks:

Most social listening software can be programed to listen for mentions without the @, with the @, and #brandname. You should listen for all three.

As mentioned earlier, one of the most recent Social Habit studies found that 42% of customers expect a response in less than an hour, and a recent Oracle report found that more than half of Twitter users expect a response within two hours of tweeting a complaint. But with thousands of daily tweets mentioning your brand, automated prioritization becomes crucial. This is done through programming rules that consider keyword identifiers and sometimes social clout or customer purchase history.

In The Great Social Customer Service Race, it was clear that many brands prioritized tweets containing the text, “thank you.” This tweet, for example, received a response in just 13 minutes: 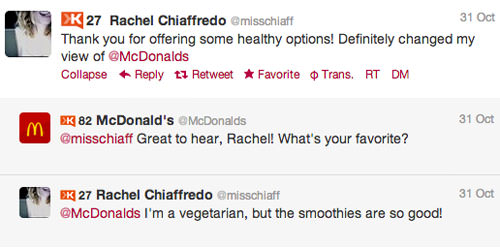 But these keyword identifiers shouldn’t stop with the obvious. In the following interactions–none of which received a response– these brands would have benefitted from having “buying,” “switching,” “help” and “mad” in their catalog of service-related triggers.

It isn’t reasonable to expect these brands to reply to thousands of tweets per day. But they should have a system for prioritizing tweets like this that indicate intention to buy, or risk of switching brands. Unanswered, these messages can be a goldmine opportunity for competitors and former disgruntled customers. Consider this response:

Work with your team to identify words with important implications. You can then program your listening software to put higher importance on these interactions when they are coupled with your brand mention.

No one would argue that all customer service requests should receive the same attention. Companies should, however, have a standard method for processing and tracking tickets.

One way your company can streamline social customer service is by integrating listening software with help desk ticketing programs. This will enable your team to process social media requests just like interactions over the phone, email or chat. This includes marking a ticket as open, resolved or waiting a response.

At one point during the race, we received two responses to the same tweet, one day apart. The first response seemed robotic, and the second didn’t address the question. 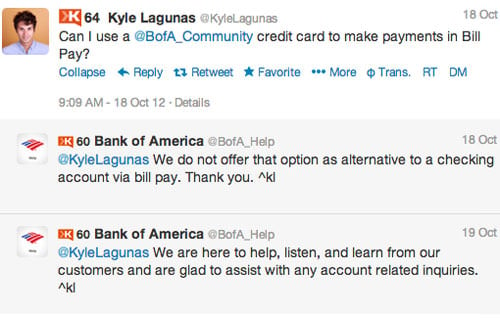 If this question were treated as a help ticket, the first responder would have marked it resolved to prevent the duplicate response.

Some help desk software integrations, or stand-alone social customer service products, can re-route a Twitter message if an agent doesn’t respond within a certain time. During the race, several responses came more than a day later. For many customers, this is equivalent to not responding at all.

Three race participants and I tweeted the same brand as many as seven times during the four-week experiment. One of my goals was to see if any of the brands would identify us as active socializers and improve their response time. Not one of the 14 brands did.

Heather Strout, professional services director at Lithium Technologies, told me recently that customers active on Twitter are more likely to share a bad customer experience than their less active counterparts. So, it’s to your advantage to identify those users who share on Twitter more regularly so you can nurture the relationship.

To do this, ensure your software records every Twitter interaction with your brand in the corresponding customer’s profile. This allows the next responding agent to quickly see if that customer is a brand advocate or tweeted negatively in the past. Also, program socially integrated ticketing software to increase response priority if a user emerges as an active socializer.

The Technology Should Fit the Purpose

Surprisingly, the brands responded to only 14 percent of our tweets. But this wasn’t a failure in technology as much as strategy. Many companies have long viewed social media as a marketing medium instead of (or in addition to) a customer service channel, despite 47 percent of social media users seeking care on Twitter and Facebook. Social media strategists should start with taking a hard look at their mission, then move to the technology.

We’ve created an infographic to illustrate the findings from our study. Feel free to download and share this infographic and let us know what you think about brands’ behavior on Twitter in the comments below.

Editor’s Note: A version of this article originally appeared on CIO.com.