5 Snapchat Statistics That Prove Its Power 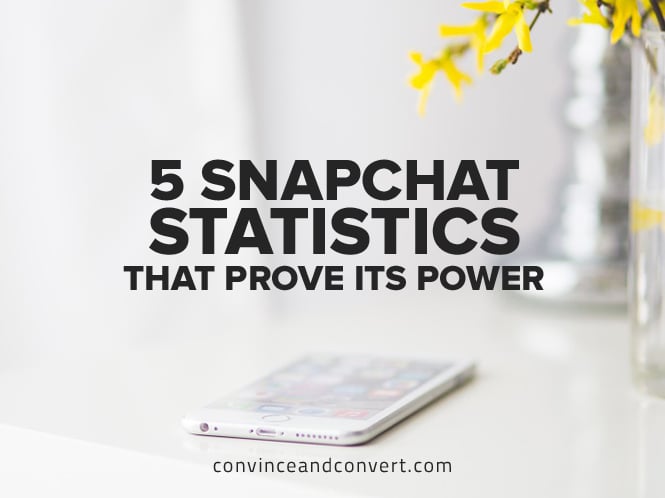 My good friends at Edison Research handled the data gathering for my new book, Hug Your Haters, and we discovered that customer service is being massively disrupted. 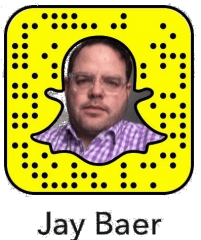 Now the Edison team is back with a new edition of their annual Infinite Dial research (they partner with Triton on it) and they’ve found another disruptive force…..Snapchat.

To read all of the Infinite Dial findings (I very much recommend you do so) go here. The report is bursting with fascinating statistics, and not just about Snapchat, but also about podcasts, streaming, online radio, and beyond.

There’s been a LOT of chatter recently among the social media cognoscenti about the emergence of Snapchat, but many people have wisely taken these entreaties with a grain of salt. Some of these “influencers” tend to hype up each new social platform, build an audience base due to first-mover advantage, and then shift to the next platform. This is the social technology version of a Jordan Belfort pump and dump scheme.

But if you had some doubts, I can now tell you FOR CERTAIN that the Snapchat movement is very, very real. The statistics nestled in The Infinite Dial are remarkable and prove a simple truth:

Snapchat is the second most powerful social platform in the United States.

Here’s why that’s so: the 5 Snapchat statistics from Edison’s Infinite Dial that prove the power of Snapchat.

Given that it’s been around for a lot shorter time, it’s amazing that more Americans are familiar with Snapchat than with Pinterest or Linkedin (not to mention Tumblr, Vine, et al). 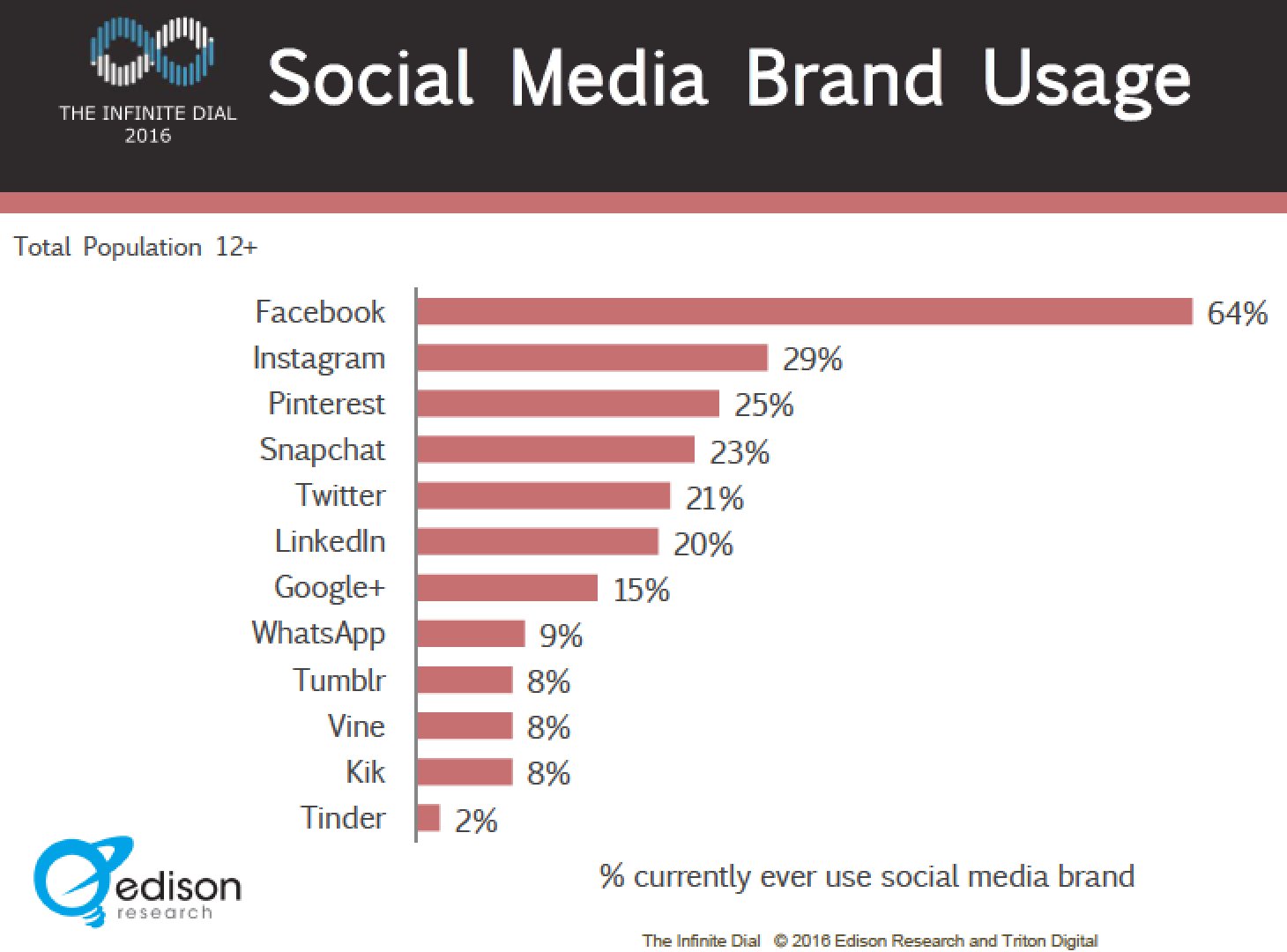 3. Snapchat grew as much in one year as Twitter has in 4 years combined

The narrative that Twitter’s growth has stalled has been an albatross on its stock price for some time now, and the struggle is real.

In the 2013 Infinite Dial study, 15% of Americans said they used Twitter. By 2016 21% of the country claimed Twitter usage. Between 2015 and 2016, Snapchat went from 17% to 23%. That’s an incredibly steep curve and now that Snapchat is breaking into more mainstream audiences, I predict it to approach 30% by next year.

Ranked by which social network they use most often, Snapchat is now in second position across the entire United States, with 8% of Americans citing Snapchat as the place they visit most. Instagram is third at 7%. Both are far, far behind Facebook, a place that 61% of social media using Americans say is their favorite.

Note that last year, Snapchat was tied for FIFTH in this preference list. 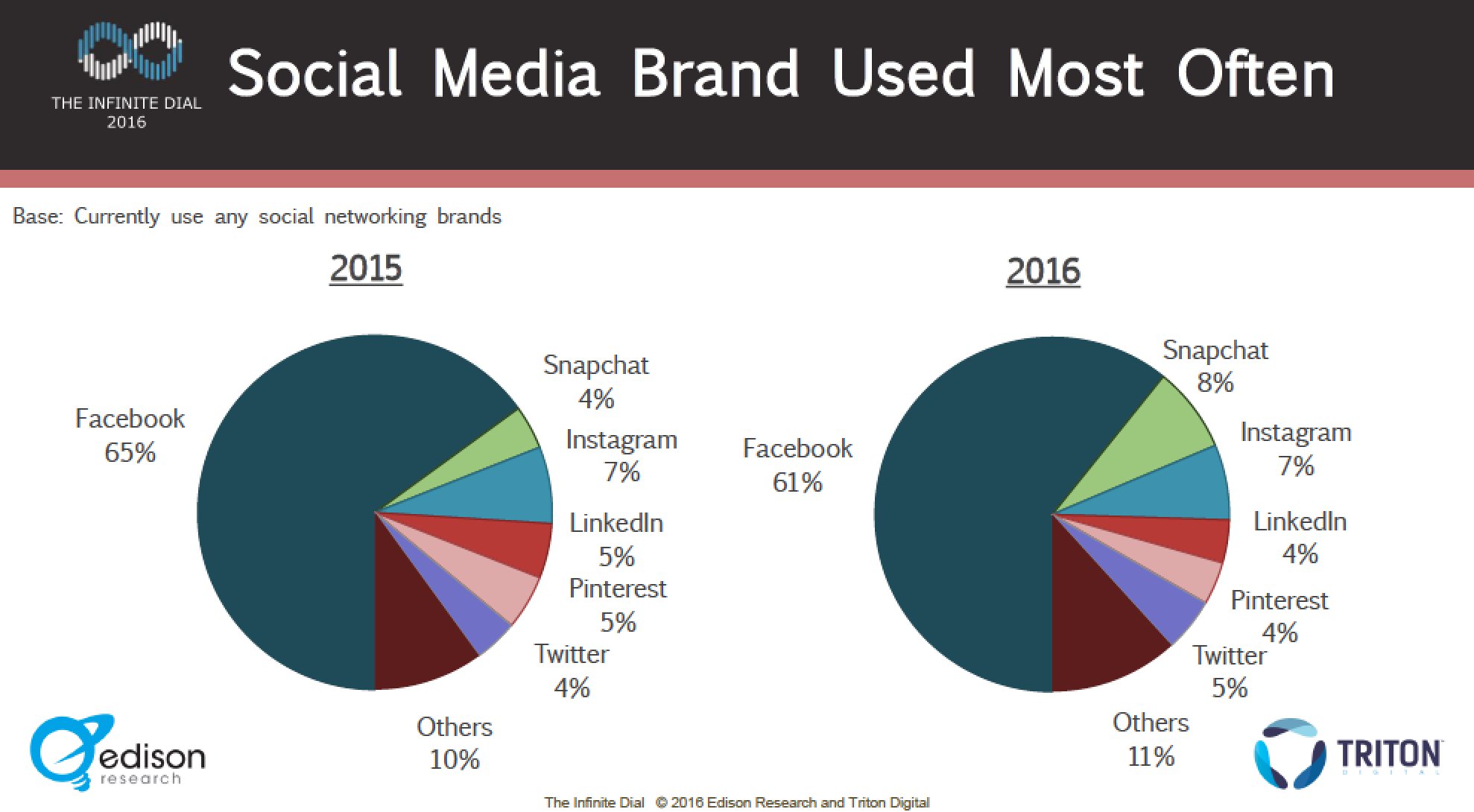 This doesn’t come as a surprise, but seeing the actual data brings this point home.

Facebook (including Messenger) remains the most popular social platform among Americans 12-24 years old, with 32% saying they use Facebook most.

This is a big move in just one year, as the previous edition of The Infinite Dial showed Facebook at 43%, Instagram in second place at 18%, and Snapchat at 15%.

Essentially what has happened is that in 12 months, 10% of the entire nation’s population of social media using 12-24 year-olds moved from Facebook to Snapchat as their platform of choice. Wow!

Snapchat’s growth makes it a force to be reckoned with in a way that has few precedents (other than Facebook and Instagram, perhaps).

Please do grab the entire Infinite Dial study. I’ve just given you a tiny taste with these 2016 Snapchat statistics. There’s a lot more you’ll enjoy.