7 Companies That Almost Tricked Us This April Fools’ Day 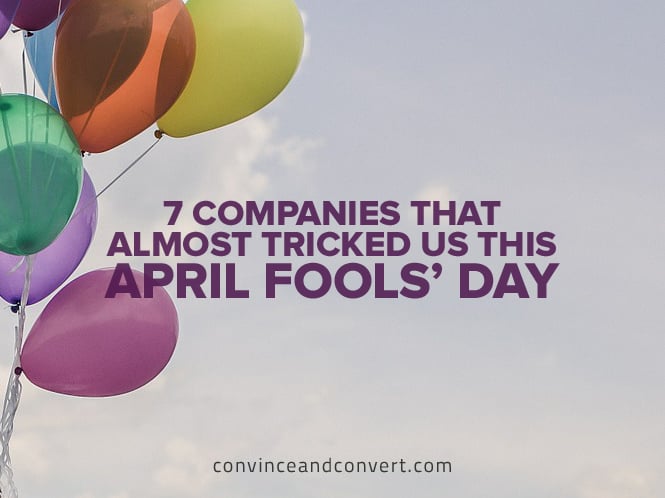 With each passing year, April Fools’ Day presents a challenge and opportunity for companies. While April Fools may not be for every company out there, there are some companies who surprise and delight us each year. Following last year’s robust Convince & Convert roundup of April Fools’ Pranks So Fun They Should Be Real, here are seven companies that almost tricked us—in a good way—this April Fools’ Day.

When a reported software “malfunction” removed CEO Tony Hsieh from his role, the company didn’t dwell on the glitch, or the stern ruling from Holacracy experts who deemed the mistake irreversible. In an official Zappos video statement from Executive Fred Mossler, the company decided to launch a 2-week search for a new CEO.

Please watch this statement from Zappos Executive Fred Mossler on the accidental removal of CEO, @TonyHsieh.https://t.co/6VBuAjjn8d

According to Mossler, the ideal candidates must “have an obsession for world-class customer service, love llamas, and know what teal means.” Applications must be sent via video cover letter with the hashtag #ZapposCEO. It didn’t take long for applications to flood in, including a few surprising ones from celebrities such as Tony Hawk, Jewel, and more.

2. ASOS Fans Can Now Get Married on Its Legendary Catwalk, Models Included

ASOS’ catwalk is about to star in more than just fashion shoots—it’s now available as a glamorous backdrop for weddings. Announced on April 1, the ASOS wedding package includes clothing (of course), dapper male models as ushers, flowers, photos, and even the company’s delivery van (limos are so last year). Read more in the company’s blog post about how “wedded bliss is but a click away.”

Before planning a dream wedding, singles need to meet that special someone. If Whole Foods Market has anything to do with it, single shoppers can now pick up more than just grocery items. On April 1, the company launched a new app called “Main Squeeze” to help their customers find love—#WholeFoodsAndChill optional.

Introducing Main Squeeze: A New Way to Find Your Next #WholeFoodsandChill. Download the app https://t.co/BSOmyCgfZZ pic.twitter.com/1f9gP3hVyD

Trying out new restaurants can be a gamble—until OpenTable’s app cracked the code on 4D technology to bring its users a taste of its many restaurant listings via lickable photos. Announced on April 1, OpenTable notes that its “lickscreen technology” is equivalent to fingerprint technology.

On the company’s website, OpenTable notes that “our Taste technology recognizes the unique taste bud patterns on your tongue to recreate the flavor profiles in your brain.” They warn users, “With excessive use, OpenTable Taste may desensitize taste buds and make you feel full though still hungry. Exercise caution as over-licking is similar to over-eating.”

Apparently, licking other photo types such as interior, exterior, restaurant staff, or guests is also not advised.

Have you tried OpenTable Taste? Show us your experience with #lickablephotos today! pic.twitter.com/d9MzbMes8E

Not to be outdone by its foodie counterparts, McDonald’s announced on April 1 that it was launching MmmBox, a monthly subscription service that matches its customers with “non-mainstream taste buds” with their favorite menu items according to their lifestyle. Akin to a hipster Happy Meal, McDonald’s has three MmmBox offerings, including The Artisan, The Ribster, and The Minimalist.

For example, The Ribster includes The McRib, a moustache comb for “combing out those pesky crumbs,” a plaid napkin, and a little bit of irony.

April 1 was a big day for Flo from Progressive, who took to Facebook and Twitter to announce that her family landed a reality TV show. Rumored to be called Flo’s Family: Behind the Glitter, each family member looks mysteriously like Flo.

On the Progressive blog, the company hinted, “The new show will truly help all of Flo’s fans understand her background and how she grew into the insurance-loving brand lady that we all know and love.”

Cleverly, Progressive is also using April Fools as an opportunity to launch NameYourPrank.com, a way for its customer to prank their friends by creating a personalized fake news story “that’s too good not to be true.”

7. Netflix and John Stamos Partner for a Documentary Unlike Any Other

Flo was not the only famous face to nab a new TV show. On April 1, Netflix and John Stamos decided announce plans for John Stamos: A Human, Being to debut on Netflix on April 31. Described as a “new original documentary unlike any other,” John Stamos will play the role of a lifetime—himself.

A VERY exciting new original documentary unlike any other. “John Stamos: A Human, Being” comes to Netflix April 31https://t.co/AhIVOF9xIj

But it didn’t stop there. As users started to cry “April Fools,” Netflix continued the fun by releasing a video statement from Chief Content Officer Ted Sarandos. Could there be something to this documentary after all?

Our deepest apology to @JohnStamos for suggesting that a documentary on his life was in some way a jokehttps://t.co/jjDUESs6rl

Well done, April Fools’ Day 2016! Which were your favorite and least favorite jokes from companies this year?