Why Cheetos Is Crowdsourcing Its Latest Campaign

Have you visited the Cheetos Museum yet? Filled with many weird, wonderful lookalike Cheetos shapes submitted from fans of the brand, this spirited museum is equal parts clever and accessible to all. 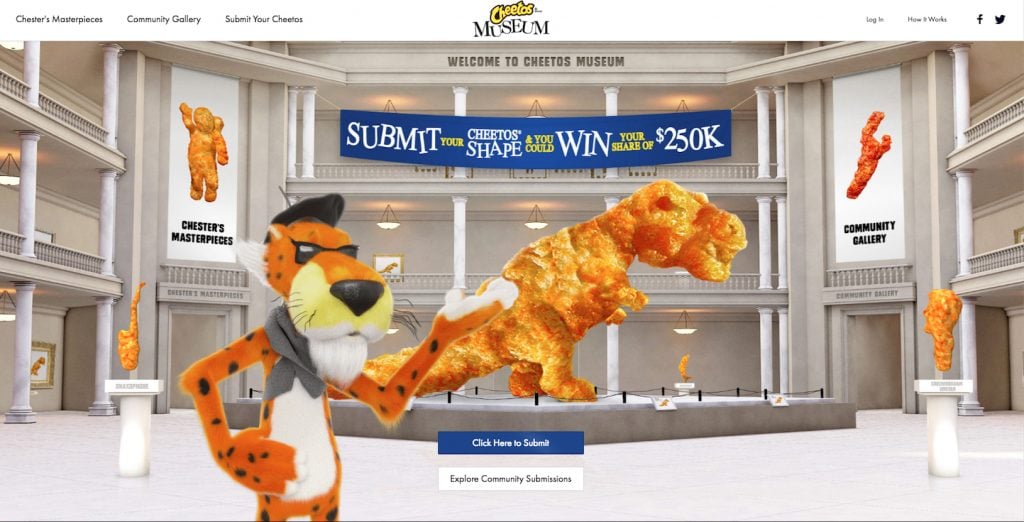 The Cheetos Museum was created in late June and lives online. Also unique? Most of the art in the museum was crowdsourced, or shall we say “curated,” by the company’s dedicated and creative community of fans.

If beauty is in the eye of the beholder, then so are the creative interpretations of the many unique Cheetos shapes featured. From a dolphin to a baby T-Rex to a mustache, the shapes truly run the gamut.

“Cheetos are like clouds: Each has a unique shape that comes to life with your imagination. Since their inception, Cheetos snacks have captivated consumers with their whimsical shapes and uncanny resemblances to landmarks, animals, objects, and even deities,” said Jeannie Cho, Vice President of Marketing at Frito-Lay. “We have seen people share, tell stories, and even sell them online—now we have an official Cheetos Museum to celebrate the creativity out there, and we want to fill it with your imagination!”

To raise awareness for the Cheetos Museum, the company is also running a contest through August 31, 2016 asking fans to submit a photo and the story of their one-of-a-kind Cheetos at CheetosMuseum.com. Each week, 10 fans have a chance to win a $10,000 prize based on the most visually interesting, buzzworthy, and creative submissions. In addition to having their masterpieces immortalized in the online Cheetos Museum, the company also plans to feature them in a real-life exhibit later this summer.

Adding to the mix is a public voting element, where Americans (the contest is only open to U.S. residents), will help to choose the grand prize winning shapes. The fan submission with the most votes will be unveiled as the pièce de résistance of the Cheetos Museum exhibit and be awarded an additional $50,000 as the grand prize winner.

As if that wasn’t enough, 10 surprise Cheetos game pieces representing specific Cheetos Museum shapes have been hidden inside specially marked bags of Cheetos. The 10 lucky fans to uncover these pieces of Cheetos art will win an ultimate family vacation (worth $10,000) to one of the cities represented by the game pieces.

The Loch Ness Monster was found. In a Cheetos bag! https://t.co/9GrphHhaTchttps://t.co/iyJ4bViugX

The Cheetos Museum is part of a growing trend. An article with Adweek reveals that Glade, Land O’Lakes, Hulu, and other brands are curating their own museums as part of a storytelling and larger brand immersion perspective.

This writer has also found this strategy particularly prevalent with luxury brands like Chanel, Louis Vuitton, and Hermes, all of which have done museum or gallery takeovers in London over the past year to educate and inspire consumers around their heritage, commitment, to quality craftsmanship and trendsetting style over the years.

So what can you learn from this imaginative exhibition?

The beauty of immersive experiences like the Cheetos Museum is how they create a forum for companies to tell their story in a unique way. Part of the beauty of Cheetos is that no two shapes are exactly alike, and showcasing how consumers interpret the shapes adds a unique layer to their overall brand experience. Bringing this story to life in a crowd-curated art museum is clever, easy to participate in, and offers consumers a new way to experience Cheetos.

What takes this initiative to the next level is how it was inspired by and curated with consumers. This is why it’s critical to know your consumers and how they behave and interact with your company on social media sites, whether via frequently asked questions, complaints, or the most shared types of content around your brand. Leverage these insights as your foundation, and sprinkle in a healthy dose of creativity to translate those behaviors into a campaign or initiative that is fun, educational, and offers a positive customer experience.

The amount of prizing in this campaign is impressive—especially for the ease of entry. However, as of June 20, the company already had 15,000 submissions. Clearly, having multiple prizing elements has contributed to the campaign success. However, what really strikes this writer is the opportunity for one grand prize winner to have their submission be the featured pièce de résistance of the Cheetos Museum exhibit. While it’s not the sole reason to enter—especially with such generous prizing—it is a great idea. This is clearly an unexpected yet cool life experience for one lucky entrant. It would also have been interesting to offer entrants a chance to win a trip to the actual museum exhibit and further immerse themselves with the brand.

Cheetos enthusiasts have until August 31, 2016 to enter their best submissions for a chance to win. Good luck!