How Two Companies Pulled a Disappearing Act for a Good Cause 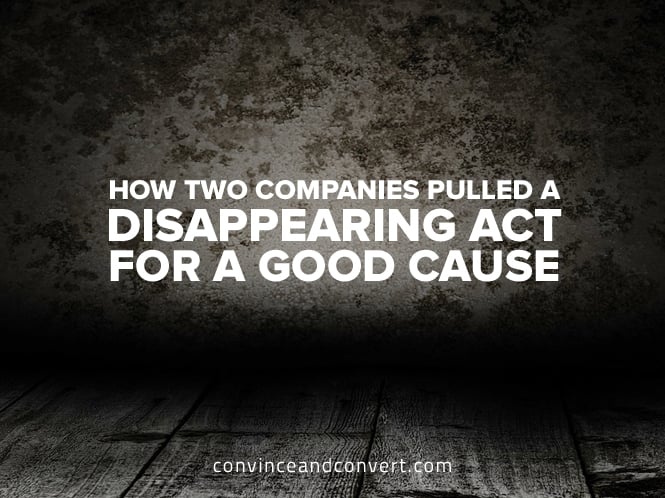 In a time where companies vie to stand out amid a seemingly never-ending stream of content, two brands are making waves for their unique disappearing acts. The twist? Both were cleverly executed in order to raise awareness for the same cause: #BringBackTheBees.

The next time you’re on Instagram or Twitter, look more closely at Burt’s Bees’ accounts, and you’ll notice that something major is missing: the B’s!

Why are letters missing from our name? ecause we’re raising awareness for disappearing honeyees. #BringBackTheBees pic.twitter.com/3t55ahrKtm

The missing B’s are part of a larger mission from Burt’s Bees to raise awareness for the disappearing honeybee population. The company has also pledged to plant one billion wildflowers to offer bees a “a nutritious and much-needed feast.” For each “b-less” tweet or Instagram post with #BringBackTheBees and each purchase of a limited edition lip balm, the company pledges to plant 1,000 wildflowers in that person’s honor.

To raise awareness for this initiative, Burt’s Bees ran a promoted tweet on Twitter, tapped numerous social media influencers, and created an educational video on the campaign with celebrity Lea Michele. There is also a dedicated website with more information.

In a localized activation, Honey Nut Cheerios’ iconic “Buzz the Bee” has gone missing from his home—the Cheerios box—in Canada. Buzz’s disappearance is also part of a larger mission from Honey Nut Cheerios and General Mills to send 35 million wildflower seeds (one for every Canadian).

“As a marketer, when you look at what’s really driving liking to the brand, Buzz is right up there with the product and the honey,” says Emma Eriksson, director of marketing for General Mills Canada. “So, to take Buzz off the box was a bold—and a little bit scary—move. But it’s worth it to draw attention to the cause that bees are disappearing.”

In addition to the video, Honey Nut Cheerios has launched BringBacktheBees.ca, where Canadians can go to request Veseys bee-friendly wildflower seeds and enter for a chance to win a garden makeover valued at $5,000. The site also shares valuable information on why bees are vital to our food supply and much more.

At press time, General Mills had reached 94% of its goal, with 32.7 million wildflower seeds requested.

While both companies took unique approaches, it’s clear that both these disappearing acts have succeeded in captivating consumer attention. When combined with storytelling through video, dedicated websites, and supporting social media content, consumers can easily understand how to get involved. Layer in easy ways to participate via tweets or planting seeds, and hopefully this spring and summer will bring many more wildflowers for the bees to pollinate.