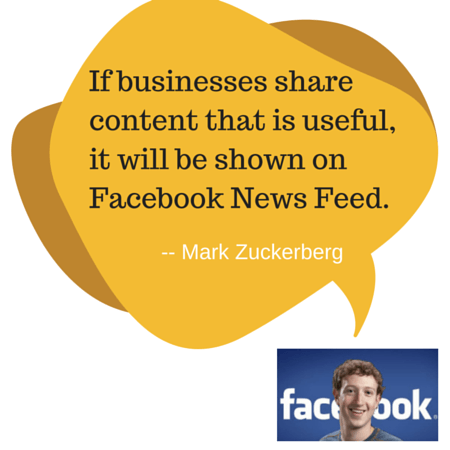 First, the Reachpocalypse, where Facebook massively reduced organic reach of business pages. And now, the Promocalypse where Facebook has decreed that as of January, 2015 overly promotional posts from business pages will be treated like a North Korean political opponent.

The potential ramifications of this disappearing act are significant for businesses that set aside Facebook landing pages (when THAT was banned) and Facebook like-gating (because THAT’s now banned too) in favor of a steady stream of organic posts festooned with breathless calls to action of dubious net present value to their fans.

Unlike Reachpocalypse, where Facebook didn’t really say anything on the record about it until 9 months after the evidence appeared, with Promocalypse they fired a warning shot 60+ days in advance via a post on the Facebook for Business blog (a resource I recommend you read with regularity).

In that blog post (which spawned hundreds of reaction posts), Facebook called out three types of posts that would receive the Kim Jong-Un treatment:

Ostensibly, Facebook wants to keep the News Feed less cluttered and annoying for users, and I suppose banishing overtly promotional posts will have that effect at some level.

It is perhaps not a coincidence, however, that Facebook specifically says that you shouldn’t post organic content that is similar to an ad because THEY WOULD LIKE YOU TO PAY THEM FOR THAT AD. Their ability to cloak their own profit motive with customer experience enhancements requires equal parts guile and gall. (To see what Reachpocalypse did for their bottom line, check this out).

In their blog post, Facebook told us what not to do as of January, but didn’t really say what TO do, other than recommendations that: “Businesses should think about their Page as a cornerstone of their online identity, not simply as a publishing service.” (because if you want a publishing service, you need to pay them).

To figure out how you should be doing your Facebook Marketing as of January, you instead needed to watch Mark Zuckerberg’s Town Hall video where he provided by far the clearest guidance on what will work in terms of Facebook marketing:

“What we’re trying to do with Facebook, and News Feed in particular, is personalize it and show you the stuff that’s going to be most interesting to you, whether that’s global news through pages that you might be following or things that are really personal to you. So updates about your friends. One of my friends just this morning had a baby, and I learned that the baby is healthy on News Feed, and it made me really happy. That might be relevant to me, but not relevant to a lot of other people in the world, and that’s one thing that we try to deliver through news feed.

So there’s this inherent conflict in the system though, which is: Are we trying to optimize News Feed to give each person, all of you guys the best experience when you’re reading? Or are we trying to help businesses just reach as many people as possible? In every decision that we make, we optimize for the first, for making it so that when the people, who we serve, who use Facebook and who are reading News Feed, get the very best experience that they can.

That means that if a business is sharing content that’s going to be useful for them, then we’ll show that. But that means that if the business is sharing content that isn’t going to be useful for them, we may not show that, because it’s probably more important that they learn about their friend who had a baby and their baby is healthy.”

If a business is sharing useful content, then we’ll show that in News Feed. ~ Mark Zuckerberg

Here’s how I think about Facebook Marketing now, and how we tell the companies we help with social media strategy to think about their Facebook content….

Give it the Mom Test.

If it doesn’t pass the Mom Test, it’s not likely to generate any meaningful organic reach on Facebook, as of January 2015.

The future of Facebook advertising is hyper-targeted and real-time giving you the ability to reach very specific audience clusters across many sites and many channels. But the future of business pages on Facebook is content marketing and Youtility, and that’s according to Mark Zuckerberg. (maybe I should send him the book)