Information as Theater – The Power of Humanized Description

I am typing this on a US Airways flight from St. Louis to Phoenix, coming back from SocialFresh. I’ll probably fly 150 segments this year, which is a lot, but nowhere near Chris Brogan territory. Today, I’ve fortunately been upgraded to first class, which happens infrequently because I travel enough to make it exhausting, but not enough to make it rewarding.

The good news, however, is that Randy is here. 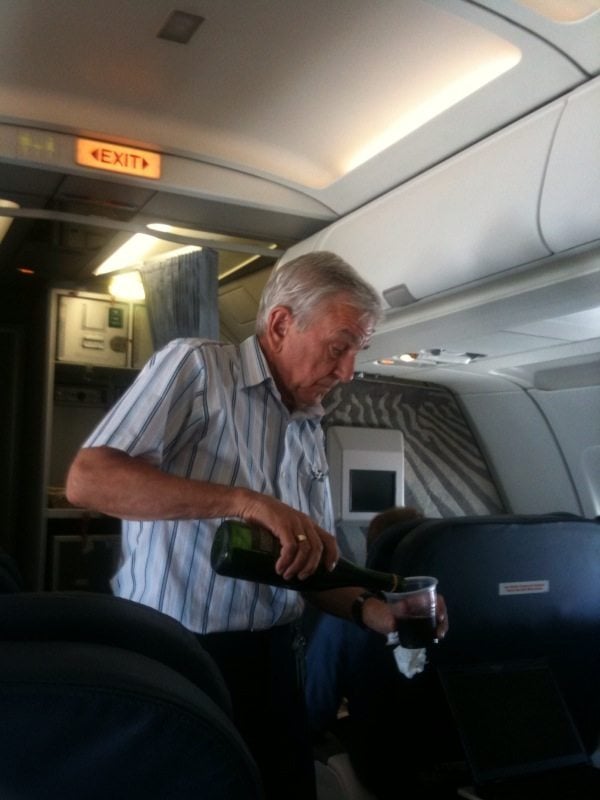 I know US Airways has made a (rightfully) big deal out of courageous Captain CB (Sully) Sullenberger. He epitomized calm, preserved life and property, and accepted his insta-fame with grace and aplomb.

But I submit the face of US Airways should be Randy, not Sully. Ask Emmanuel Rosen, – whose revised version of Buzz Marketing should be required reading for all communicators. Or, Steve Knox and the guys at Tremor who spend massive amounts of time and energy figuring out how to make Procter & Gamble products buzz-worthy. It’s not about doing the expected well, it’s about doing the unexpected.

Air travel has devolved to the point that it’s essentially a shared national joke, like Trump’s hair or Paris Hilton’s vacuousness. But Randy turns that paradigm on its head, making air travel enjoyable again.

And sure, he gets drinks in a jiffy, is uber-efficient with baggage stowage, etc. But what makes Randy exemplary is a simple lesson that every company should reconsider – he relishes the description.

Here’s (paraphrased) Randy’s opening monologue to the passengers just behind me, in the first few rows of coach:

“Ladies and gentlemen, I bid you a kind welcome to Flight 187, from St. Louis to Phoenix, Arizona otherwise known as paradise. We’ll make a short stop in Phoenix, and then carry on to San Jose’s Norman Mineta airport. The captain has informed me that the flight duration will be almost precisely three hours. I’d like to congratulate each of you for an exceptional job in the boarding process. You stowed your baggage in the overhead bins thoughtfully, and you’ve all contributed to our on-time departure today.

My name is Randy. I am not the “first-class” flight attendant, but rather the forward cabin flight attendant, and your enjoyment of today’s flight is more important to me than anything other than your safety. Despite what you may have heard from other flight attendants, it is perfectly acceptable to use the forward lavatory, located at the front of the cabin, provided that you remain behind this bulkhead until you see the light behind me turn green, indicating that the lavatory is vacant.

When I come through the aisle with the cart to deliver to you beverages, please do watch your elbows and ankles, as the clearance on either side of the cart is just an inch or two.

Then, Randy comes back to the 12 first-class passengers, and says:

“Ladies and gentlemen, you are about to experience ecstasy from start to finish, as I have at your disposal a selection of beverages and all you can eat snacks that are sure to delight each of you. We have the sublime sea salt and cracked pepper Kettle brand potato chips on board today. We have a new item, similar to the fig newton, but filled with strawberry. I highly recommend them. We have our mixed nuts and cranberries, which I am warming for you as a congratulations for your orderly and on-time boarding. We have a new biscotti, terrific with coffee or Bailey’s and coffee, from a company ironically owned by Interbev, the European brewers that purchased Anheuser-Busch, which is based here in St. Louis. We also have the shortbread cookie, which has finally returned to the air after three and one half years of customer requests.

We have Bailey’s available neat, in coffee, or with cream. The special liquor in the cabin is an aged Glenlivvet Scotch. The rum is Bacardi. The vodka is Finlandia. The bourbon is Jack Daniel’s. We have several speciality cocktails, including a Pomegranate martini with either vodka or gin, a Margarita, or I can doctor you up a delicious Mai Tai.

The imported beer is Becks. The domestic beer is Budweiser or Bud Light, and although the company is now owned by Europeans, it is still brewed in St. Louis. ”

Could Randy have said (as has EVERY other flight attendant I’ve ever witnessed) “Information about beverages and snacks is located in the US Airways magazine on the seat pocket in front of you” (the good ones tell you the page number) – of course he could. But he didn’t. Randy turned the simple conveyance of information into theater.

Information Isn’t Boring By Accident. You Make It That Way.

Why can’t you do that? Why can’t you bend over backwards to explain EXACTLY how your product works, and why? Why can’t you have error messages on your Web site that are descriptive and blameless? Why can’t you make your FAQ a marketing and sales tool, instead of a necessary evil? Why can’t you find the Randys in your company, and let them train everyone else?