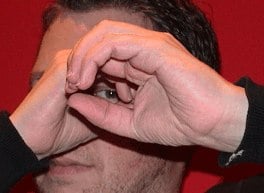 Joseph Jaffe of Jaffejuice and Crayon was the first interviewee in the Twitter 20 series from Jason Baer at Convince & Convert. 20 questions and answers live on Twitter. A twinterview.

If you sat in, I’d love your feedback and ideas in the comments below. Who would you like to see interviewed in in a future Twitter 20? Thanks for joining the conversation.

1. @jaybaer: You’ve been in digital marketing for many years. How did you get involved in that area? Why not a fireman or an astronaut?

2. @jaybaer: You’re from South Africa. What brought you to the U.S.?

3. @jaybaer: Your book and presentations talk a lot about “conversation marketing”. Is that really marketing? Or is it customer service?

4. @jaybaer: great interview with @comcastcares on your podcast. Hard to find good examples? Many killer conversations are invisible because they’re 1:1?

5. @jaybaer: What are the main impediments for companies really joining the conversation?

6. @jaybaer: You talk about companies meeting consumers half-way in the conversation. What do you mean by that?

7. @jaybaer: Organizationally, who do you think should “own” conversation marketing?

8. @jaybaer: Because PR is about getting ink? What role do you see for agencies then in helping brands with their conversation marketing?

9. @jaybaer: What’s the most overrated aspect of all this social media craziness?

10. @jaybaer: Conversely, what component or tactic are too many people overlooking in their social media and conversation marketing efforts?

11. @jaybaer: On a side note, doesn’t conversation marketing preclude anything from being the next big thing? It’s about small things.

12. @jaybaer: How do you see social media and conversations fitting into the overall digital marketing universe? Or does it?

13. @jaybaer: Do you support brands with outposts on Facebook et al? How can they build communities there?

14. @jaybaer: You were an agency guy at Chiat/Day. Frustrations being the digital guru?

15. @jaybaer: You work with a lot of big brands. Advantages o disadvantages on their ability to put your advice into action?

16. @jaybaer: Talk about your firm, Crayon. http://www.crayonville.com What is the approach? How does it differ?

17. @jaybaer: Crayon staff are located in many places, true? How does that work? Do you get together routinely, or is it mostly virtual?

18. @jaybaer: You travel a TON. How do you balance that with your family, something a lot of consultants face?

19. @jaybaer: How do you value blogging vs. podcasting vs. books vs. speaking? You said in your Podcast #111 you like it better than blogging.