Editor’s Note: Kurrently is no longer available, however, we recommend using Social Searcher which has much of the functionality that Kurrently used to have. Check it out at http://www.social-searcher.com.

The future of real-time data didn’t come from Google. Or Microsoft. Or IBM. It came from a Canadian computer sciences student who uses his free time pretty damn wisely.

Kurrently is a new, free real-time search engine that combines results from Twitter and Facebook in a simple, blazing fast format.

“I built Kurrently in the three weeks between the end of school and the beginning of my internship at Microsoft,” said Kurrently’s creator Gilbert Leung in my recent Skype interview with him. 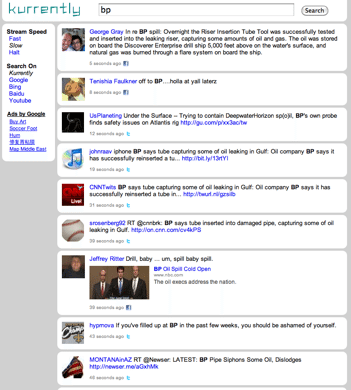 Put any search term or combination of terms into Kurrently, and instantly receive the chronicle of RIGHT NOW, with Tweets and Facebook status updates organized by date stamp. The results automatically update in front of your eyes, and watching Kurrently results for a buzz-worthy live event is a breathtaking portrait of our interconnectedness.

Kurrently’s search results give you a strikingly different picture of what’s happening, as even for searches like “jay baer” I found quite a lot of Facebook chatter that I simply did not know existed until now. I believe Kurrently has the potential to make Facebook a much larger player in the social CRM world, as companies can now instantly see just how much they are being mentioned on that platform. Heretofore, the preeminence and ease of Twitter search may have contributed to an over-emphasis on Twitter in corporate America: “We can’t “see” into Facebook easily, but we can on Twitter, so let’s worry about that.”

“I’ve been a user of Twitter search for a long time, and it’s great. But there are 400 million people on Facebook,” Gilbert said. “I want to know what they are saying, too.”

I’ve been wondering whether the Open Graph API will yield an explosion in Facebook-powered satellite applications (like the 2,000+ Twitter add-ons that all seems to start with “tw…”). Gilbert thinks perhaps it will happen, but that the additional complexity of the Facebook API will dampen the explosion somewhat.

Either way, the implications for Kurrently and the real-time Web are profound. Pattern recognition is available almost instantly, and companies can capitalize on just-in-time marketing and social CRM opportunities like never before. As Gilbert pointed out, our own intersection is a good example. My friend Todd Lynch (@prtodd) mentioned Kurrently to me on Friday. I checked it out, and tweeted it. Gilbert noticed the RTs immediately, as he is constantly monitoring the search term “kurrently” on Kurrently (natch). I emailed him to set up an interview a few minutes later. The real-time Web is about seeing opportunity, and acting upon it.

Help Shape the Future of the Real-Time Web

Gilbert is considering adding several other features to today’s admittedly basic version of Kurrently. Concepts under consideration include a variety of different search results (not just by time, but possibly by relevancy or impact), analytics, RSS feeds, widgets and more. This is your chance to help shape this exciting new search engine, as Gilbert wants ideas and feedback. Send them via Twitter @kurrently

What do you think of Kurrently? Take a second to check it out and then leave a comment, okay?