I saw my mom the other day. She’s a pretty hip lady for 64. She was a high school teacher for about 30 years, and was always a student fave. Stylish. Knew the music. Knew the scene. Thought Patrick Swayze was hot.

Now, in her semi-retirement, she’s the editor for an online-only newspaper. She takes digital photos, uses a content management system, writes a little SEO copy.

She was asking about Convince & Convert and how it was going. I told her it was coming along nicely, that subscriptions to the blog were way up, and that people like Chris Brogan were saying favorable things about it.

“Chris Brogan? Who’s that? Doesn’t he play for the Coyotes?” she asked. 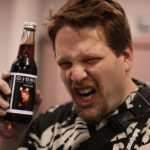 While I was surprised at how imposing a character Brogan is when I met him recently at Marketing Profs Digital Mixer, I’m pretty sure that he in fact does not play hockey in the NHL. (photo by Brian Solis)

And there’s the lesson.

Social media makes it simple to get wrapped up in our world. Reading blogs, tracking tweets, doing consulting. It’s easy to overlook that none of this passes the Mom test.

SEO passes the Mom test. Email passes. Tivo passes. iPhone passes (at least conceptually). Of course there are elements of social media that pass (MySpace, and increasingly Facebook). But as a discipline, social media and its practitioners absolutely do not pass. Not even Chris Brogan and Gary Vaynerchuk.

I find conferences exacerbate this effect. I was at PodCampAZ recently (hat tip to Brogan and Chris Penn for starting it all, and high five to Evo Terra and Brent Spore for a great job on this year’s AZ version). I probably shouldn’t have been, but I was flat out astonished at the number of content creators in the audience. Watching a live stream of a room that I was in, and having that stream coming from the laptop of the guy sitting next to me was Matrix-esque.

The fact that in 550 years we’ve gone from the invention of the printing press to a world where every kid with a cell phone is a potential real-time broadcaster is exhilarating. But it doesn’t pass the Mom test. The recent Forrester technographics study update backs me up. Only 21 percent of Internet users are classified as content creators. 25+ percent of people are unlikely to create online content any time soon.

The Time Will Come

It’s easy to become frustrated with brands that don’t get it. Marketing directors that refuse to engage in social media. Twitter spammers. Bad pitches from PR folks  that have never read your blog. (nice case study from Dave Fleet) And on and on.

But what we can’t forget as an industry (if it can even be called that) is that we are at the very tip of the spear. We’re where SEO was 10 years ago. Where television was 50 years ago.

We can’t expect a business community that has been fundamentally operating under the same marketing principles since the invention of the newspaper to immediately embrace this new opportunity en masse, regardless of how obvious the benefits of doing so may appear to us.

As my Mom used to tell me, “Be Patient. Your Time Will Come.” And when she knows Brogan, we’ll know it has indeed arrived.

Do you agree? Does social media fail the Mom test for now? Are we overeager about social media?