Online Community With Purpose and a Plan

Lisa Beatty was at a cross-roads. This 40-something Florida Mom found herself undergoing several simultaneous life shifts, and realized that products and the communication about them didn’t resonate with her any longer. Companies didn’t seem to understand where she was, who she was, or what she wanted.

So, Lisa Beatty build JaneNation.com, a new opinion, information, and idea community just for women, that launched recently at the Marketing to Women conference. 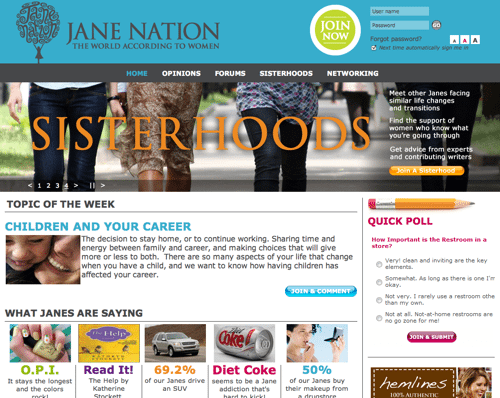 With free membership open to all women, JaneNation combines social networking with opinion collection. There are blogs, forums, quizzes, polls, and sisterhoods (micro communities based on women’s life stages like “caregiver” or “widow wise”).

There is zero advertising on JaneNation.com, and there never will be. Because you see, unlike most communities that are created based on brand affinity, and then conduct market research as an aside (if at all), JaneNation was built to tap into the minds of America’s females.

JaneNation will package its findings through newsletters, seminars, and other research programs, and also connects brands with female consumers (for a fee, natch). Says Lisa Beatty, “We want to bring women into the conversation, but also into the solution. That only happens if they have a real, ongoing relationship with brands.”

And Now For Something Completely Different

But here’s where it gets interesting. In addition to being Chief Jane of JaneNation, Lisa is also the Cultural Strategist for St. John & Partners, a full-service advertising and public relations firm, based in Jacksonville.

Responding to Forrester’s research about the need for agencies to become “connected” – to be the bridge between brands and their consumers, St. John & Partners has spent two years, and committed serious dollars and time (several FTEs) to making JaneNation flourish.

“We recognized the need to step up our game,” says Lisa. “If we’re going to counsel clients on the role of community, and its ability to garner insights, we need to be able to walk the walk.”

Wow. Here’s an ad agency that believes in the wisdom of crowds and community-building enough to build a major online destination ON ITS OWN DIME, and commits to never selling advertising on it? How’s that for eating your own dog food?

“The women of JaneNation have to see value in their participation, and that requires that we have a different strategy than just trying to make a quick buck,” says Lisa.

From a business standpoint, it’s brilliant. With JaneNation, St. John & Partners can have conversations with major brands that perhaps wouldn’t put the mid-sized agency on their radar otherwise. Big companies are starting to follow JaneNation on Twitter, and engage with the community across the social Web.

St. John & Partners is evaluating other communities that they could build and manage, and of course they are now confident in their ability to sell community construction and oversight to their clients.

Is this the future of agencies? Being both participant and observer? What do you think of this approach?

(disclaimer: I do some consulting for SJP, but was not involved in JaneNation)