Scott Monty – The Twitter 20 Twinterview about Social Media at Ford 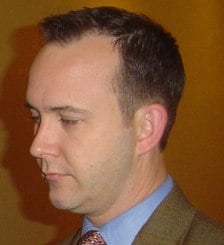 Scott Monty, the head of social media for Ford, participated in a Twitter 20 interview on October 23 and answered a wide range of questions about social media at big companies, and his ideas for the future of conversation marketing.

Scott and myself and 248 other lucky folks were in Scottsdale for the Marketing Profs Digital Marketing Mixer.

1. @jaybaer: How do you describe your role at Ford?

2. @jaybaer: This is a new role within Ford? How did they handle social media before you arrived?

3. @jaybaer: A lot of talk at this #mpdm conference about setting social media objectives. Do you have one for Ford, or several?

4. @jaybaer: Auto is a many layered business. How do dealers view your work? Are they aware? Can and do they do their own social media?

5. @jaybaer: Interesting point about CRM. Do you feel social media is more an acquisition tactic or retention and brand loyalty tactic?

6. @jaybaer: Ford is of course a large company. How does that help or hinder your social media efforts? It sounds like they’ve given you a lot of rope

7. @jaybaer: The company has a lot of agencies and other marketing programs. Do you actively coordinate the social media efforts with them?

8. @jaybaer: You were at Crayon, a social media strategy firm previously. Differences in the in-house and out-of-house SM process?

9. @jaybaer: What social media programs/plans are you rolling out for Ford that have you excited (other than free Ford Flex rides at #mpdm)?

10. @jaybaer: In terms of your Twitter strategy, is it de-centralized? Several people, several accounts? How do you staff it?

11. @jaybaer: There’s talk about companies cutting SM budgets because it’s “experimental”. How do you balance SM and today’s auto climate?

13. @jaybaer: In today’s #mpdm luncheon @garyvee talked a lot about passion. Why are you passionate about social media?

14. @jaybaer: I agree that SM is the future of marketing, but when will that future arrive? Still people not online, much less Soc Media.

16. @jaybaer: Your travel schedule is onerous. Is that helping or hurting your social media outreach efforts? Wi-Fi in the new Mustang!

17. @jaybaer: You apparently have a Sherlock Holmes blog?http://bakerstreetblog.com Can you elaborate on that please?

18. @jaybaer: It’s Elementary. You also have a co-blog with@cc_chapman on diners and dives (@diners). Recommended diners or go-to items?

19. @jaybaer: I imagine it’s been a bit of a whirlwind since you started at Ford (3+ months). What’s been most gratifying to-date?

20. @jaybaer: The rules are still being written. What bugs you? If you could outlaw one component of social media, what would it be?