Join me and 21 other speakers for Facebook Success Summit 2010, a Webinar series with everything you need to know about Facebook for business. Sessions start October 5. Go to http://bit.ly/facebooksuccess to save 50% for a limited time. 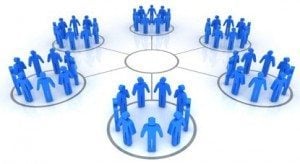 But now, companies are starting to experiment with using Facebook as their social media home base, instead of as an outpost.

And why not? It doesn’t matter what business you’re in, your customers are on Facebook. Now rocketing past 200 million members (making it the 6th largest country in the world if it were a nation), Facebook offers online reach previously available only in Google and Yahoo flavors.

Before the commercials, Vitamin Water has approximately 40,000 fans on Facebook, and now has 259,663. Not bad, but the real ROI will come from Vitamin Water activating their fans, not just collecting them.

Retail clothing darling H&M is doing just that with a spiffy new Web site to Facebook integration that displays their Spring collection with engaging Flash animations on the corporate site, but asks visitors to click through to Facebook to comment on each item. Terrific synergy, and solid participation, with more than 100 votes and comments on each garment.

I see 7 advantages to using Facebook as your social media home base.

1. Reach
One of the great axioms of marketing is “Fish Where the Fish Are.” Increasingly, fish of all shapes and sizes are on Facebook.

2. Clarity of Purpose
Facebook enables brands to interact with their fans via wall, discussions, events, photos, videos, etc. without a bunch of other corporate content getting in the way.

3. Analytics
Facebook provides substantial data on the affinity and demographics of your fans. In comparison to Web analytics, Facebook provides a much better sense of who your audience is in real life.

4. Ease of Use
Facebook pages can be established and maintained by everyone in your company that is not Amish. No fancy programming skills required.

5. Promotion
When consumers become fans of your company, that fact is shared with their friends via the real-time update component of Facebook. No public announcement is made when somebody visits your Web site.

6. Personal
The fact that Facebook users have to be real people (unlike MySpace and Twitter, no fakes allowed) and have to be authenticated before use, consumers can’t hide behind anonymous usernames. Plus, because the vast majority of Facebook members use authentic profile pictures, the “relationships” between consumer and brand have an out in the open characteristic that isn’t available on most Web sites.

4 Reasons Facebook Shouldn’t be Your Social Media Home Base

I see a few drawbacks to pushing Facebook as your social media home base.

1. Brand presentation
Facebook does a terrible job of enabling brands to customize the look and layout of their pages. This is by design, and while it prevents Facebook from devolving into the visual mess that is MySpace, it’s tough to tell your highly paid branding agency that you can’t use the corporate font, colors, etc.

2. Ownership
Facebook is huge and getting bigger all the time. Based on recent reports of 600,000 new members per day, approximately 1,249 people have joined Facebook since you started reading this post. But, no matter how big it gets, you don’t own it. It could be bought, bastardized, ruined.

3. URL
This is perhaps a niggling point, but I’m told that Facebook requires a Facebook media buy to get a direct Facebook.com URL like www.vitaminwater.com/facebook. That’s a big ante for many brands. The non-custom Facebook URLs are ridiculous. I had a friend (@lisamloeffler) set up a Facebook page for a local theater company I help direct. The Facebook URL is: http://www.facebook.com/pages/Flagstaff-AZ/Theatrikos-Theatre-Company/61012197614 (thanks, Facebook. That’s super convenient) If I were you, I would set up internal redirects to Facebook. Something like http://facebook.exacttarget.com (insert your brand name in place of my friends/clients at ExactTarget).

4. Analytics
While the demographic data and interactions counting of Facebook’s analytics is great, you don’t get any information on referrers. It sure would be nice to know whether my email campaign, tweets, YouTube video, et al drove people to my Facebook page. Get on it, Facebook.