Social Listening and Analysis for the DIY Inclined

If you are conducting any level of online reputation management or campaign tracking using social media data sources, you have to get beyond the obvious. The point of tracking software isn’t to determine how many tweets were sent mentioning a company, it’s to figure out what those tweets say, and what the business ramifications are. Too often, standard charts and graphs included in software are just that, standard. They provide numbers, not insights.

If you’re an agency that’s providing social media listening or analysis services for clients, this is even more critical of a distinction. The ability to click “print” is not the exclusive domain of the agency professional. The more you serve up to your clients rote numerical recitations without context and recommendations, the more you’re opening yourself up to being replaced by your clients’ own printers, ink and paper.

You need to be creating custom charts and graphs and ideas that speak directly to the operational realities of each client. The disheartening truth is that there is very little “standardized” reporting available if you’re going to do social listening and analysis at the highest level.

That’s what I like so much about the new RowFeeder social data gathering system. Assuming you want to dive into the pool of custom graph creation and data manipulation, you’ll probably do so in Microsoft Excel. RowFeeder is built for just such as circumstance, with tight Excel integration (version 2007 and newer) that provides both raw data for geeks to pull like taffy, plus canned reports that are better than most.

For social media professionals inclined to get their mathematical hands dirty, it’s a winning combination.

Six types of reports are included in RowFeeder:

I interviewed Adam Schoenfeld, President and Co-founder of RowFeeder to learn more about the company and its plans. RowFeeder is the first business to be spawned from the buzzed about new tech incubator Untitled Startup – a “transparent startup” in Seattle that even publishes their website traffic live on their home page.

To date, customers of RowFeeder have either been interested in monitoring social media campaigns (tracking hashtags, Twitter replies, etc.); or engaged in brand reputation management, often on a weekly basis. Schoenfeld says that the original RowFeeder project was intended to integrate into Google Spreadsheets (and it still does), but the recent addition of Excel tie-ins open up the user base substantially.

“We think we’re ideal for companies needing that next level of insight into online conversation,” he said.

Because the RowFeeder team is very welcoming to custom report requests, it’s a good solution for agencies looking to put their own stamp on analytics, especially those without an Excel ninja on staff. Schoenfeld figures that for now, custom report ideas from companies and agencies help formulate the RowFeeder R&D path. (disclosure: RowFeeder gave me a free account to play with for a few weeks) 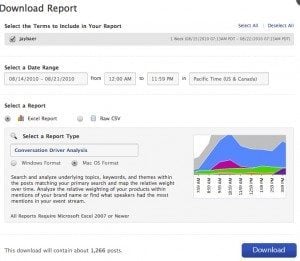 The RowFeeder reports are extremely easy to generate. After initial sign-up, just click a button, pick a date range and the report shows up on your desktop as an Excel file (or even CSV for the authentic nerds). 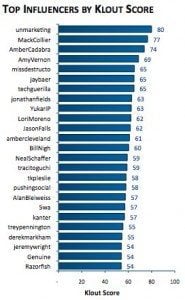 The standard charts and graphs are entirely useful. I like the at-a-glance usefulness of this one that shows the people that have tweeted about your company, organized by Klout score (See my post about Klout and online influence mining here).

But given that RowFeeder is intended for the data warrior, my favorite feature is the spreadsheet capture of all mentions. Want to see every person that’s tweeted about you or send a Facebook message about you in the last 2 days? No problem. You get a single spreadsheet that includes keyword; name; full text of the message; URL of their Twitter bio; location; number of followers and friends; time sent; Klout score, and more. Having ALL the tweets and Facebook messages on a single sheet is fascinating and satisfying. It’s also very handy for easy archiving of historical social mentions (lawyer types or readers working in regulated industries should take note of that feature).

The ease-of-use and Excel format of RowFeeder are big pluses for me. The drawback is that they are only tracking Twitter and Facebook for now, so if you need to monitor blogs, blog comments, discussion forums, Linkedin or anything else on behalf of your company or clients, you’ll need to gather that data elsewhere.

Pricing is quite reasonable for RowFeeder. One keyword and up to 500 posts (Twitter or Facebook mentions) per month is free, making it a potential zero cost solution for very small businesses. Beyond that, pricing increases based on number of keywords and posts in $5 increments. The agency package includes white label reporting capabilities, custom charts, API access, and centralized management of multiple client accounts. For up to 50,000 combined posts monthly, the agency edition is $250/month.

RowFeeder does just a few things, but does them well in an Excel environment that is familiar to millions of people. It’s not the most full-featured solution available, but for the do it yourself data hounds, it’s a very nice addition to the social listening landscape.