We’re Not All Social Media Spielbergs 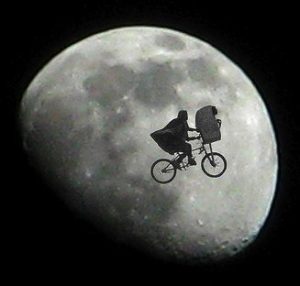 Are we expecting too much of people in social media, even the raving fans?

Jim Beam has a history of great social media programs, and their most recent is “The Remake” video contest. The premise is that you create your own video that spoofs Beam’s hilarious “Girlfriend” TV commercials.

First prize is $25,000 and a trip for 4 to Vegas. Pretty tall clover, although not quite as tall as Doritos’ similar and now famous user-generated Super Bowl commercial. Joe Herbert won $1 million, and his “snow globe through the vending machine” effort won USA Today’s Super Bowl Ad Meter.

Is This For the Fans, or for the Media?

But even for all the publicity, Doritos has just 1,961 entries in their video contest. Sure, that’s a lot of homemade videos, but with a $1 million prize, approximately $2.5 million for the TV time, and a couple hundred thousand on Web site production, you’re looking at $1,886 per contest entry.

As a promotion, the ROI is probably huge. As a social media program, I’m not sure $3.7 million to generate 1,961 entries makes sense.

In Jim Beam’s case, the contest doesn’t end until March 22, but so far they have generated 7 entries. Not riding the crest of the zeitgeist yet.

Don’t Make it Too Hard to Be a Fan

One of the shortcomings of the Doritos and Jim Beam programs from a social media perspective is that they presume that knocking out a video (even for a chance to win $1 million) is something that many of their brand loyalists can do, or want to do. Sure, both contests provide a little help with digital assets and guidelines, but it’s still largely a DIY proposition.

Now, contrast that with Sports Illustrated’s Swimsuit Video Mashup last year. That effort enabled participants to take existing video clips, audio clips, transitions, etc. and drop them on a timeline to create their own swimsuit highlight video in minutes. No prizes. No TV commercials. Just a fun and EASY way to extend the swimsuit issue experience.

Unlike Milk, Social Media is Not Homogenous 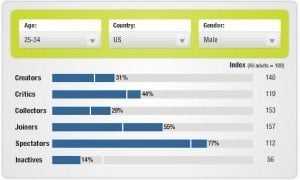 I use the Forrester Social Technographics Ladder a lot when working on social media consulting and training projects, because I believe it demonstrates well the notion that there are many types of social media users.

I don’t know for sure, but I’ll guess that the target audience for Jim Beam, Doritos, and Sports Illustrated are similar. Doritos probably skews younger, but they all target men. According to the Forrester data above, 31% of the male, 25-34 audience in the U.S. are Creators, meaning they might be interested in making their own video.

Certainly, all of these video contests allow for voting, so you also appeal to the Critics (another 44%). But without submissions, there’s not much to rate.

I love a good video contest as much as the next guy – probably more so. But when people are worried about having a job and whether or not squirrel hunting is legal in their neighborhood, I think I’d rather let them make a video easily with existing parts, then ask the 31% Creator group to go make a whole video.