Tyson Crosbie is not your ordinary photographer. Since stumbling upon Twitter nearly two years ago, he’s ignored the norms and customs of commercial photography, and found a way to incorporate social media into every element of his work.

As a food photography apprentice, Tyson observed how closed and parochial photographers were about their work, and aimed to make photography an open and educational process. 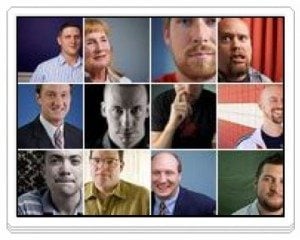 Shortly after moving to Phoenix, Tyson saw a tweet from the sublime @msherr a fixture in the Arizona social media scene who heads up social media for digital agency Terralever. She needed a new picture for use in social media, and Tyson said he could shoot it.

Tyson took the best 15 photographs from the session, and uploaded them as a set on Flickr. Friends were then invited to view and comment on the photos, helping Ms. Herr determine which one to use as her avatar.

“I initially began the soft edit crowd sourcing process as a way to better educate myself and my clients about photography,” says Tyson. “Sometimes clients select photos that they probably would not have, but the positive feedback from the community can be influential.”

Now, Tyson uses the soft edit crowd sourcing process for all business portrait photo shoots. Anyone can comment on the Flickr sets (as long as they have a free Flickr account), and the soft edit commenters have become an online community.

“There are dozens of people who comment on the photos. Some are professional photographers, but most aren’t,” says Tyson. “If they know the subject of the photo, they are more likely to comment, and some people just love the process and participate regularly.”

Business portraits for use in social media and elsewhere make up a large portion of his commercial photography work, and he charges $500 for that service – including the soft edit crowd sourcing process. He is also an accomplished fine art photographer, and recently concluded a Local Home Exhibit whereby Phoenicians who tweeted about the project were eligible to win the opportunity to show one of Tyson’s large photos from the Phoenix 21 exhibition in their homes for one month.

When Tyson first began shooting avatars, few people were serious enough about their social media personas to consider professional photography. Now, interest in business portraits is surging. “I’ve done more than 30 business portrait sessions in the last year or so,” Tyson says. “That seems like a lot, but there are 600-700 heavy Twitter users just in Phoenix, so there’s a lot more opportunity.”

Tyson also says he has been hired for several jobs based on his name being affixed to the lower right hand corner of images he posts online.

Help Me Pick a New Me

Want to see how the soft edit process works? Since I’ve grown a beard, I recently had Tyson shoot new photos of me. The 15 candidate photos have been uploaded to Flickr. All that’s missing is your feedback. Please participate and help Tyson and me figure out what Jay Baer should look like on Twitter, on this blog and elsewhere in social media. 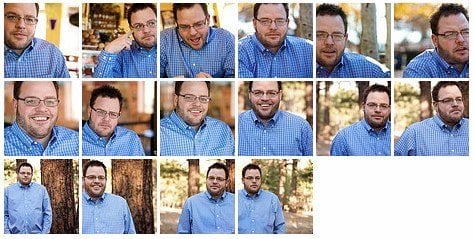