The Effect of Brand Loyalty in the Costco and AmEx Breakup

FBI Announces They Can Hack on Their Own

It has been a month since it became public knowledge that the FBI was locked out of an iPhone used by one of the San Bernardino killers. And after getting rejected by Apple in assisting with the unlock, the bureau has been flooded with offers from people who said they could get into the encrypted phone.

In the last week, the agency announced that they would be receiving help from an unnamed hacker, causing Apple vs. FBI chatter to skyrocket. Mentions peaked on March 21, with over 16,000 mentions coming in on Monday evening: 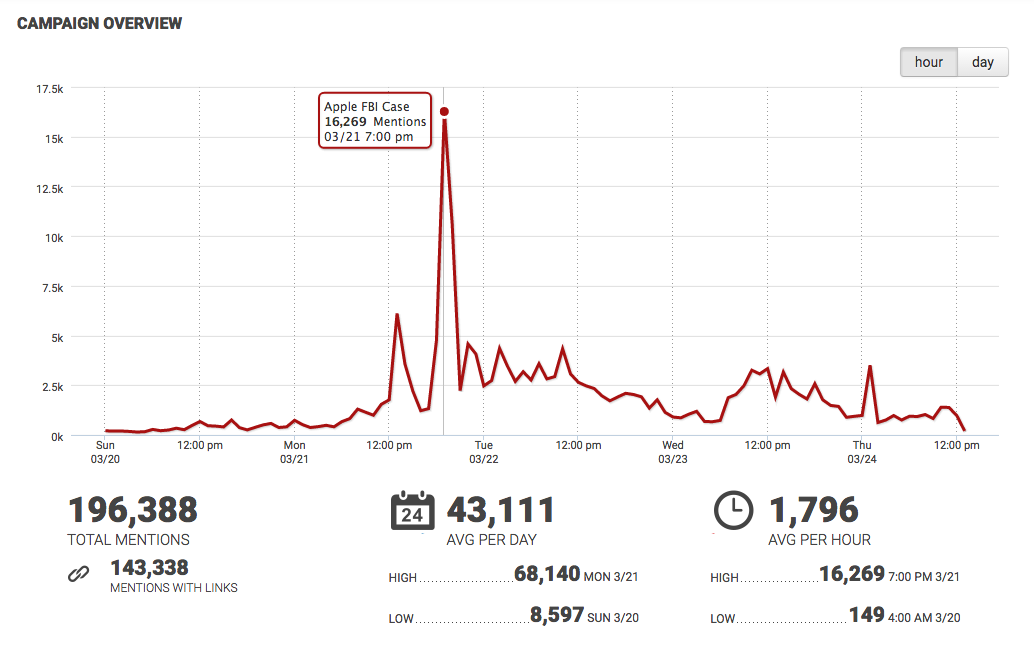 In turn, the breaking news took over ALL of the Trending Stories around the battle between the tech giant and the government: 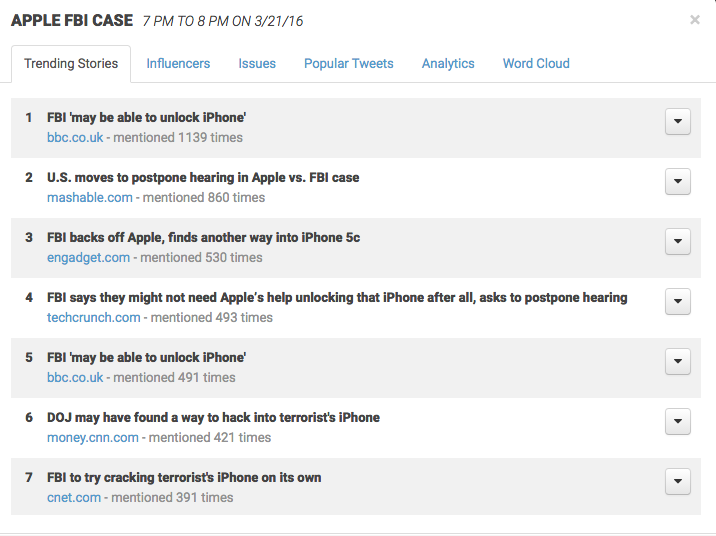 And Twitter conversation was flooded with news of the FBI’s newly discovered capabilities: 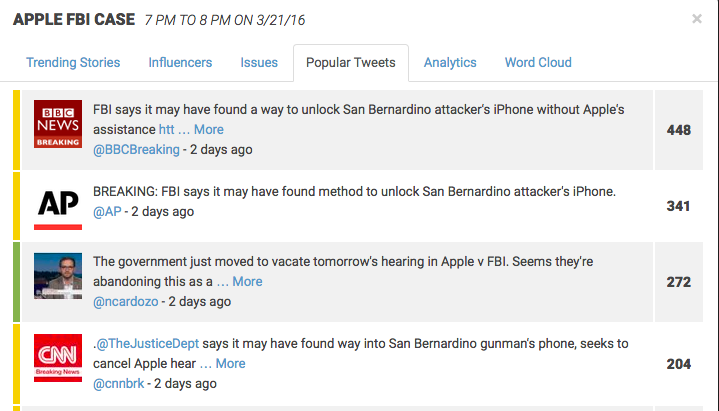 But how were people outside of the press responding to the FBI’s independent hack?

According to the Emoji Cloud below, ? and ? are two of the most prominent emojis associated with the discussion: 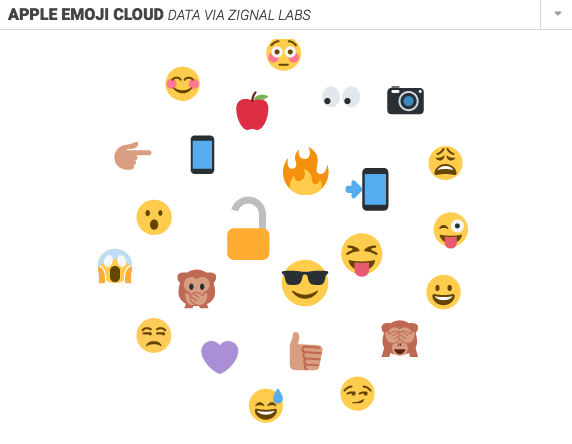 ?, ?, and ? are all logical emojis to find within the conversation, but ? and ? (aka Smiling Face with Sunglasses and Face with Stuck-Out Tongue and Tightly-Closed Eyes Emojis, respectively) do not necessarily invoke obvious connotation.

In further analysis of this emoji usage, ? and ? represent sentiment found in tweets. ? is often used in place of “cool,” which is why the emoji is situated alongside news of the FBI’s renegade-like response to Apple.

On the other hand, ?  is a bit harder to decipher. As seen below, the silly expression evokes that people are not taking Apple seriously, as their software is now publicly recognized as hackable:

Based on these emojis, one may assume people are impressed with the FBI’s ability to retake control of the situation. Will this translate into less consumers turning to Apple for secure devices? We will have to wait and see.

The End of Costco & Amex

With over ten percent of American Express cards co-branded with Costco, it has not been an easy breakup for the financial institution. Starting June 20, Costco will instead accept any Visa card, cash, checks, and debit cards.

Since news of end date broke, “Costco” and “boots” have been two of the most-used words in the Amex-related conversation. This is illustrated in the Word Cloud below: 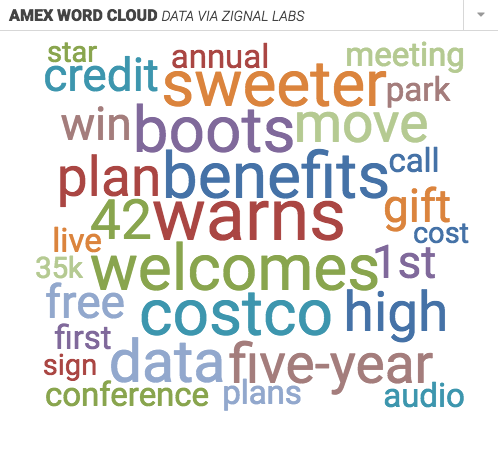 With Costco’s switch over to Visa, it is worth examining how Visa and Amex compare in the financial services discussion.

In terms of mention volume, American Express is more dominant within the United States: 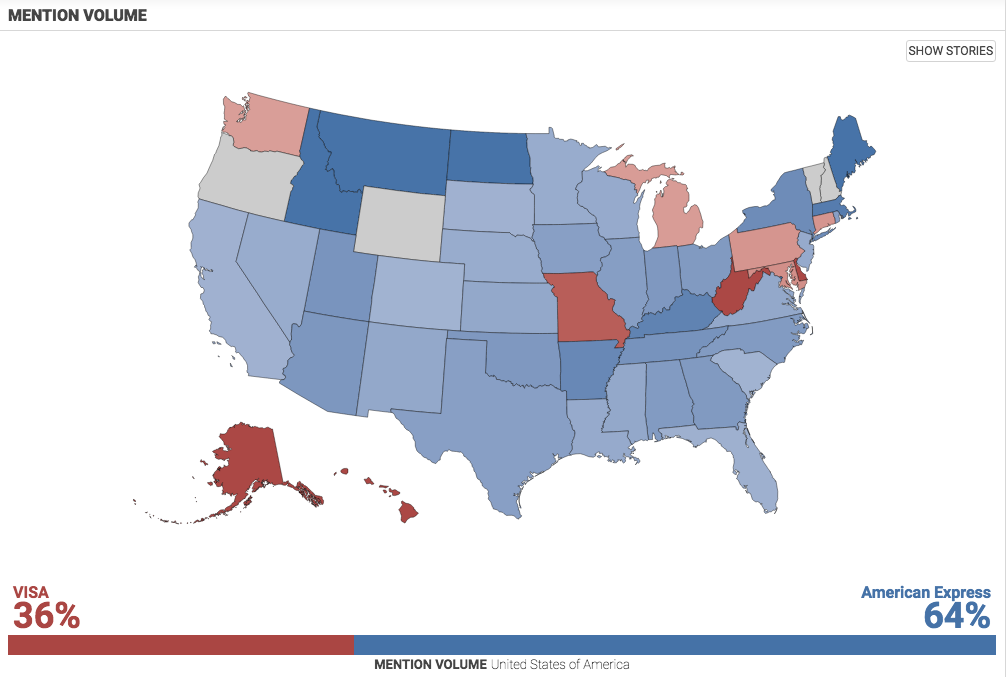 In any case, both Amex and Visa are two of the country’s largest card services companies, and the switch is not expected to leave people distressed. Many of the benefits with the new Costco card will either remain the same or even increase:

“Customers will continue to earn cash back rewards on all eligible purchases through June 19, which will automatically transfer to the new card Costco from Citibank. The reward check for both cards will be enclosed in the Feb. 2017 Citi bill. Perks on the new Costco Anywhere card are even better than with Amex. Cardholders will now get a 4% cash back on gas purchases worldwide up to $7,000. The old benefit was 3%. Restaurant and travel expenses will get a 3% benefit, Costco purchases get 2%, and everything else gets 1%.”

Furthermore, this is not he first time a retailer and a credit-card issuer have split up. With Wal-Mart switching from Discover to MasterCard, and Best Buy opting for Visa over MasterCard, Costco is simply replicating moves that many others in the retail industry have recently made.

Over the years, American Express has cultivated more brand loyalty than any other credit-card issuer. After dropping Amex for Visa, it will be interesting to see if there is a drop in Costco card membership, as well.