What Real-time Marketing Can Learn From QR Codes

This week birthed substantial pondering about the present and future of real-time marketing, centered around what brands did right and wrong when attempting to culture jack the Oscars with tweets of varying degrees of irony and Youtility. My post on the topic became one of the most-read posts ever at Convince & Convert. Many other marketing thinkers weighed in, and these analyses from Rohit Bhargava, Scott Monty and Augie Ray (among others) are worth your time.

Now that I’ve had another week to mull it over (my original post was published when the Oscars were still in progress), I‘ve figured out what this whole “real-time marketing” kerfuffle reminds me of…..QR codes.

QR codes in magazine ads are stupid, because their only role in that circumstance is as a URL replacement, and nobody is walking around saying “damn, these URLs are too much of a hassle” especially when reading a magazine with a laptop or tablet presumably within reach. (yes, I realize that I put QR codes in my first book. I was young and foolish). Similarly, canned tweets from brands hoping to surf the real-time wave by merely parroting publicly available or known information is equally insipid.

I love their beer, and raved about the six word film plot contest they ran on Twitter on the same day, but I don’t need Stella Artois to tweet me a graphic announcing something that I just watched LIVE on television. That is the “QR code in a magazine” version of real-time marketing: 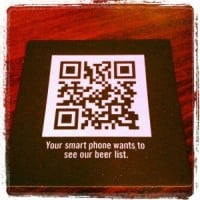 Where QR codes make sense, however, is when they unlock information that adds to an environment where mobility is assured or presumed. One of my favorite examples is this bar coaster from Scotty’s in Indiana, where patrons can unlock the rotating beer menu via QR.

In this way, QR codes ARE real-time (or should be). How can they make a scenario better? Could they show the set list at a concert? Could they be added to a jockey’s silks to show the horse’s racing history? Realtors that instantly distribute house specs via QR code (instead of tubes of curly, paper flyers) are using the technology in a way that improves, rather than annoys.

We should be thinking about real-time marketing the same way we think about QR codes. (Tweet this)

Brands should participate in real-time if they can do one of two things:

First, if they can play the humanity card with in-the-moment commentary (heartfelt or snarky). This is in the spirit of Mystery Science Theater 3000 (someone should hire THOSE guys as real-time chatter producers).

Second is to take a cue from the Scotty’s QR code, and find a way to add information and insight to the proceedings. That’s why I was enamored with what WSJ and others did, providing tidbits that added to my knowledge of the affair.

If you combine these two ideas (unvarnished opinion + information snacks) you end up with a real-time marketing effort that’s akin to the commentary track on a DVD. It’s extremely interesting to some people, not at all to others. But that’s okay. A narrower, yet more passionate audience will trump a broad, disinterested audience every time. And the more brands suck all the life and spontaneity and information out of culture jacking the more it becomes all about the media, and not about the social.

Brands can take a lesson from smart usage of QR codes to help guide their real-time marketing initiatives. Or maybe I’ve got it all wrong?