Why Celebrating Wendy’s Tweets Is All Wrong 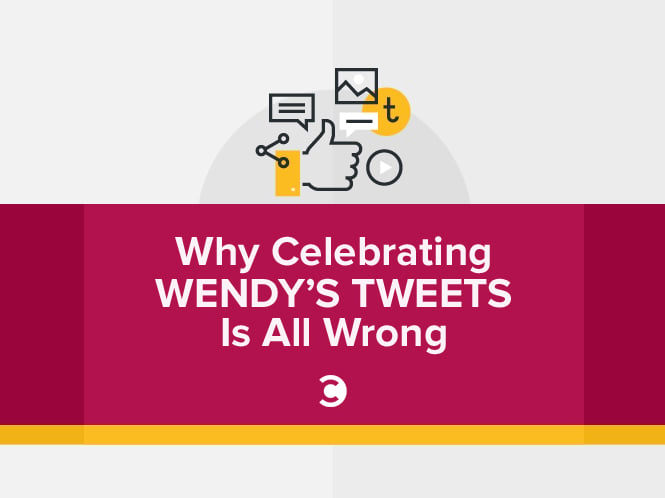 The Internet celebrated last week when Wendy’s gave an uncouth Web denizen his comeuppance via a sharp and timely tweet:

The evisceration of Thuggy-D caused digital and traditional media alike to celebrate Wendy’s victory in this “Twitter beef” including an entire segment on Anderson Cooper that played like a Jimmy Fallon bit, if Fallon were still in middle school and had no talent:

Yeah, Wendy’s was funny and quick and put the guy in his place, and it worked out for them that one time.

But just a week later, the Wendy’s social team spread a white nationalist symbol on Twitter when they off-handedly posted a Pepe the Frog photo in response to a fan request. Turns out, that image has been deemed hate speech by the Anti-Defamation League. (edit: Pepe’s association in this way is not widely accepted)

Not so cute now, are they?

I’ve heard the Twitterati say “someone should be fired for that frog image” or “give them a pass, it was an accident.”

The outrage is misplaced. The frog was an accident. The refrigerator tweet was intentional, and THAT’s the one that crosses the line. Putting customers in their place in real-time, with no checks and balances, is a very dangerous game with limited upside and a ton of downside.

Does Wendy’s—a $2 billion company—want to reach “edgy” Millennials and Gen Zers so much so that it willingly takes reputation risks by posting memes and jumping into Twitter beefs with customers? (edit: I removed the name of Wendy’s social media manager in this version of the post, because it’s not really relevant to my point)

Evidently, yes. And I guess if you’re measuring success based on retweets and zeitgeist surfing, you can claim a win on this one. But to what end?

Further, while some people tweeted that they specifically were going to Wendy’s for a burger in celebration of their successful Twitter put-down, what’s incalculable is how many people thought “What the hell? why is a hamburger chain poking fun at customers and tweeting white supremacist imagery? I think I’ll go somewhere less wacky for lunch.”

By definition, you can see your “successes” in social, but the failures in social mostly show up in lack of foot traffic, which is impossible to attribute with clarity. Thus it’s very easy to believe that everyone is in agreement with the brand, when in fact, the exact opposite could be the case.

Playing Gotcha in Social Media is a Losing Strategy

Social media for corporations typically has three objectives, in this order:

You can argue that calling out customers on Twitter increases passion for Wendy’s, but at what cost?

If this is what social is becoming—a place where brands play gotcha with one another and with customers—I very much question the business value of that approach, especially because the true success/failure equation is almost impossible to determine.