Why Instagram Stories is Actually Good News for Snapchat 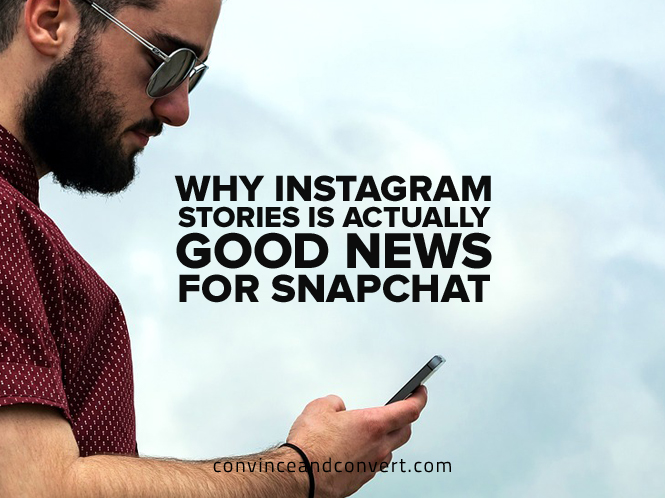 At this moment, the only things more plentiful than Olympics coverage and Presidential faux pas are predictions of Snapchat’s imminent withering and demise, due to the near pixel-for-pixel mimicry of the newly launched Instagram Stories.

Here’s but one doomsday account. Use your favorite search engine to turn up dozens more.

It’s a convenient—although not particularly insightful—narrative to proclaim that “new thing will kill old thing.” It’s a trope as old as media itself. (While you’re searching, look for some “TV will kill radio” coverage.)

Inconveniently, these proclamations of death are almost never correct. And the same is true in this instance.

Let’s briefly recap the conditions on the ground. As I wrote about in “5 Snapchat Statistics That Prove Its Power” a few months ago:

In summary, Snapchat has a user base that rivals Instagram, and a passion index that exceeds Instagram’s, especially among younger users.

But what imperils Snapchat’s audience passion (or did, until this week) is that as the platform “ages up” and businesspeople like me, moms, and brands start flooding in to hang out in the “next big thing” the tone and tenor of the community is changing dramatically. This will cause the original adopters to say “This doesn’t feel as interesting as it used to, and I don’t want to hang with my parents in a social network. What’s next?”

And this is not an online phenomenon alone. This hype cycle happens in technology of all types, as well as in bars, restaurants, and celebrity culture. Have you ever stopped liking a band because they got “too popular” and “sold out”?

In short, the people who made Snapchat viable—young, early adopters—were destined to begin defecting elsewhere.

But these core Snapchat fans will not flock to use another service unless that service offers dramatic differences and advantages. Instagram Stories may have a more intuitive interface, but that’s not game-changing functionality, and may actually turn off Gen Z users who prefer a little mystery in their UI.

The Paradoxical Power of a Smaller Snapchat

Instagram Stories will skim off the casual Snapchat users, attracting them via ease-of-use and better account growth and discovery features. But it will not attract the Snapchat core.

My teenage children and their friends – rapid Snapchat users – cannot possibly understand why anyone would use Instagram Stories. They describe it as “too slick” “too obvious” and “the same as Snapchat, but worse.”

Instagram Stories provides Snapchat with the opportunity to pull off a rare feat: a smaller—yet more valuable—social network.

Yes, growth of the platform will likely slow, and Snapchat will begin reverting to its roots as the darling of youth. But they will be left with an increasingly homogenous audience of massively passionate users, who eschew most other social networks and other mechanisms for reaching them.

This makes Snapchat the only game in town when brands want to reach the fickle, highly valuable youth market, allowing them to charge higher rates for a smaller, more demographically pure audience.

From an operations perspective, that’s all good news. The core doesn’t bail. You have real differentiation in the market. And you can charge more for ads and partnerships.

From a valuation perspective, it’s probably less positive, as VCs who don’t actually understand social network dynamics and long-term monetization care only about monthly active users, growth rate, and trying to “catch Facebook.” This binary view will probably result in a flattening or decline in Snapchat’s valuation as growth rate slows.

It’s About More Than Stories

On the functionality side, analysts wringing their hands about Instagram copying Snapchat’s Stories functionality are missing the much bigger picture.

This isn’t a technology fight, it’s a philosophical struggle. Zuckerberg and Facebook/Instagram believe that the citizens of the world fundamentally want to tell other people what they are doing—and the more the better—even if their relationships with those people are weak and algorithmically defined. Snapchat had a good way of doing that with casual video, so they aped it.

Evan Spiegel and Snapchat have a fundamentally different worldview. Spiegel has talked in the past about Generation Z and young people as a whole preferring the “phone book” model of communication, where instead of trying to build an audience, they seek more intimate connections and share with a few “real” friends rather than many “pretend” friends.

For the teenagers I’m around, Spiegel is 100% correct. They use Snapchat vastly more as a messaging app than for any other purpose. Stories is a fun diversion on occasion, but for them acquiring a bigger audience on Instagram with whom they can share their stories is not an objective. In reality, WhatsApp and Messenger are a much bigger threat to the large group that uses Snapchat for communications.

So if it won’t “kill Snapchat” why would Facebook make such a huge change to Instagram, a platform that was doing quite nicely on its own?

Facebook’s vision is a world dominated by video for connectivity and messaging for communications. Mark Zuckerberg has been succinct and clear about this, including these remarks at the Mobile World Congress in February 2016:

Most of the content 10 years ago was text, and then photos, and now it’s quickly becoming videos. I just think that we’re going to be in a world a few years from now where the vast majority of the content that people consume online will be video.

Of course, if Facebook becomes the dominant purveyor and curator of all that video, their collective control over the world and its inhabitants grows accordingly.

But even with the Facebook Live rollout, the move to video as the atomic unit of human connection isn’t moving fast enough for Zuckerberg and Co. Thus, they are attempting to accelerate this transformation by morphing Instagram from a photo sharing platform to a new creature that makes creating video easy, fun, casual, and viable for all humanity in a way that “live” never will be.