Will the New Apple Car Have Windows?

Down in sunny Tampa, FL, Social Fresh 2015 kicked off on Wednesday. This event is run by Jason Keath and his social media education company (under the same name), producing conferences for industry leaders from around the world (so much to learn, always a blast!).

Over the past few days, Social Fresh has generated THOUSANDS of mentions across the board: And by Thursday, we found that Scott Monty and Chris Brogan were making the most noise: Convince & Convert’s very own Jay Baer swung the most mentions on Friday, peaking with 216 at 10am EST and 169 at 4pm EST. 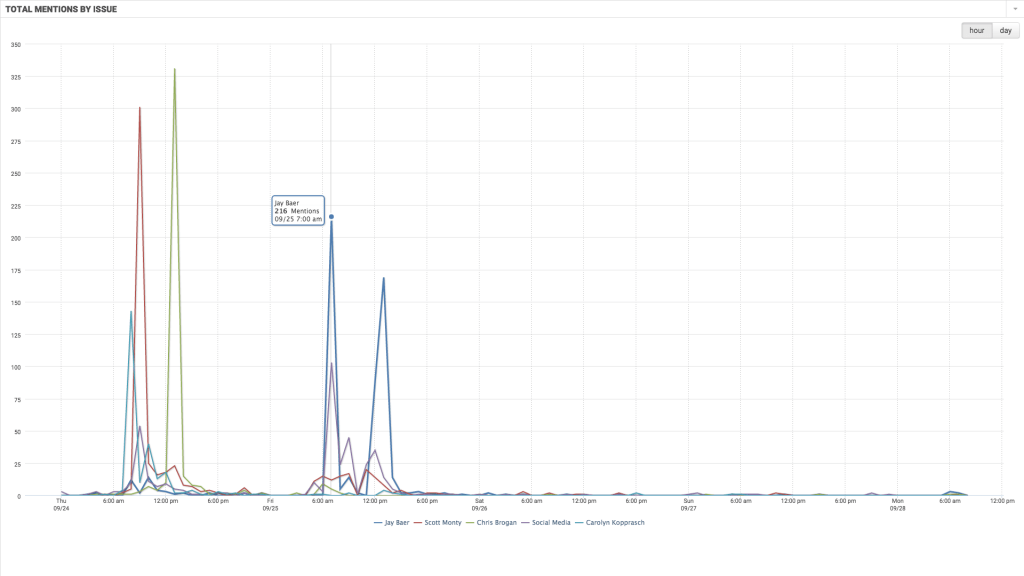 Clearly, the speakers generated the most buzz throughout all of Social Fresh.

Side note: We ran a little contest on Twitter, after Carolyn Kopprasch (Customer Happiness at Buffer) sparked some interesting conversation around when she joined the platform:

.@carokopp says she joined Twitter in 2009 – can anyone at #SocialFresh beat this? We have a prize for the winner! pic.twitter.com/wdUQikWQV9

After asking other Social Fresh attendees when they joined, we found that Ricky Cadden has been on the platform the longest:

Congrats, Ricky! And a special shout-out to our second place winner, Matt Hannaford (February 2009) – we have a special surprise headed your way!

The maker of “iProducts” has quietly announced a project under the code name “Titan,” and many are speculating this could result in the first-ever Apple Car. According to the Wall Street Journal, the initiative is requiring three times the number of engineers that it normally would, and has a ship date of 2019. With everything being kept under wraps on Apple’s end, the public has been left to make it’s own guesses as to what is going to come of this project – and the conversation certainly hasn’t fallen short!

Top mentions pulled in here at Zignal Labs indicate people are primarily wondering what the car will look like and what it will be called:

And of all the questions being asked, this one is coming up the most (for good reason):

Apple Presses Ahead With Efforts to Create Car, Though Big Issues Remain (eg., will it have Windows?) http://t.co/rt23zzWlCN. #apple — Chris Neumeyer (@Chris_Neumeyer) September 23, 2015

@jrfm if Apple is coming out with a car, will it have windows? — míranda (@mirandagingras) September 23, 2015

So Apple is planning on releasing their new “iCar” my only question is, will it have Windows? — Gregg (@GreggOchs) September 24, 2015

Pope Francis arrived stateside on Tuesday afternoon, initiating a six-day visit across several U.S. cities. Throughout his visit, the pope has illustrated empathy for the poor, while discussing some of the country’s largest political, social and economic issues.

Upon the pontiff’s arrival in Washington D.C., President Obama, First Lady Obama, and Vice President Biden were each there to greet him as he arrived from Cuba. Here is a realtime word cloud capturing mentions as soon as the pope touched down:

Throughout the week, Pope Francis has generated well over 100,000 media mentions. Among all of the Papal buzz, we are finding these are the issues being brought up the most during the Pope’s visit:

Notice that climate change is carrying 23% of the conversation, followed closely by immigration and security – in turn, we can see that several domestic US issues are also concerns on a global level. It will be interesting to watch how this may affect the positions held by US politicians and the conversations around the current pool of US Presidential contenders.

Last Friday, news broke of Volkswagen purposely programming over 500,000 diesel-powered vehicles to emit lower levels of harmful gases in official tests than on the roads. We captured automotive industry buzz over the last week, and as you can see, VW is at the center of it: These headlines continued to escalate over the weekend, reaching new heights on Tuesday when VW released to the press the fact that they found “significant emissions discrepancies in 11 million diesel vehicles worldwide.”

By Wednesday morning, it was safe to say the company was in trouble. Volkswagen’s chief executive, Martin Winterkorn, announced his resignation around 8AM PT, and mentions of the CEO spiked once the story began to spread.

It is also interesting to note that by the end of the week, all trending automotive stories pulled in by Zignal Labs featured “Volkswagen” or “VW” in the headline: Our prognosis? This is sure to cause a ripple effect across the industry, as other automotive OEMs are now being investigated for falsifying emission tests.