Why You Need to Think About Eye Tracking 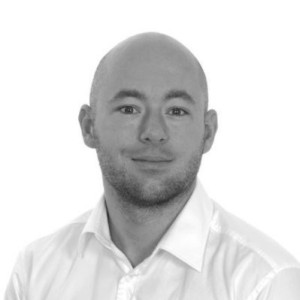 What if I split

a sentence onto two separate lines, for no apparent reason?

Why would I do that? Maybe I did it to confuse you. Maybe I’m deliberately trying to surprise or annoy you, so that you’ll feel invested enough to read the rest of my article. Perhaps I’m trying to establish myself as an unreliable narrator, giving me license to pull all kinds of tricks on you throughout the remainder of this article.

Or maybe I unexpectedly split a sentence onto two separate lines in order to illustrate the power of eye movement. Let’s take a look at two more examples.

Consider poetry. If you open a book—any book—you’re likely to find inside the exact same visual pattern regardless of length or genre. You’ll see an indentation on the first line of a paragraph, a series of neatly justified lines of a consistent width, and then a hanging line which, along with the slightly increased spacing and newly indented line below, indicates the end of a paragraph.

But now think about books that flip that script, like poetry anthologies. Shakespeare’s verse introduces a new set of visual rules. For some modern poets, the arrangement of words on the page is a tool that can be used in any number of different ways. A quick Google image search of the poetry of e e cummings adequately expresses this idea, but for further illustration, I’m forced to offer the following haiku:

Poetry touches us so—

Did you notice how I included a dash? The first sentence of this article gave your eyes no warning, and allowed you to “stumble forward” unexpectedly onto empty visual space.

But now, by priming you with a paragraph about poetry, telling you specifically to expect a haiku, adjusting line spacing and indentation, and including a few horizontal pixels, your brain reprogrammed your eyes to move in an entirely new way. After reading the second line, I’d venture that your eyes moved down to that third line of the haiku much more smoothly than in the opening line break.

For one last example of the interaction between text and eye movement, let’s examine the garden path sentence. Think about your eyes as you read the following passage:

There was no doubt in anyone’s mind. The old man the boat. Whenever a sailing venture was called for in that arctic seaside village, the pleas of the young men to venture out were roundly ignored on account of the great danger. (…)

Consider the middle sentence. Now, grammatically, this sentence is completely correct. The reason you were led “down the garden path” initially is simply because your mind accepted “the old man” as the subject of the sentence, only to subsequently find that this phrase includes both noun and verb.

There was no doubt in anyone’s mind. The old man captained the boat. Whenever a sailing venture was called for in that arctic seaside village, the pleas of the young men to venture out were roundly ignored on account of the great danger. (…)

The addition of a single, nine-letter word changes the meaning only slightly (from a plural to a singular noun), and yet the physical experience of the eye’s movement across the screen is dramatically altered.

So now that I have your attention, let me tell you why this all matters.

The Reason Behind All the Trickery

What was the purpose of the exercises above? Was it simply to mess with your mind? (I am a psychology researcher, after all.)

My goal was to convince you of the inherent value of eye movement as a marketing paradigm, not by using facts or figures, but instead by connecting you on a personal, experiential level to the fascinating science of eye movement.

Eye movement may not be on your radar screen as a marketer just yet, but it’s been a hot topic in the realm of psychological science for decades. (Remember your experience above with the garden path sentence above? It turns out this simple language tricks is more complex than you could imagine!)

All of these different perspectives are valid and important to consider. They are each a part of a whole. But another, equally valid piece of this complex puzzle is the simple fact that marketing, particularly web-based marketing, comes down fundamentally to the consumer moving their eyes across a screen.

I believe that the movement of the eye is the most fundamental physical unit of marketing.

It seems logical, then, that in a field dedicated in part to “catching” the consumer’s eye, it would also make sense to measure how successfully the eye is “caught.” Marketers need a way to know whether or not the consumer did in fact direct their attention where it was meant to be directed.

The Uses for Eye Tracking

While design is certainly an important component in the effort to catch the consumer’s eye, the fact of the matter is that even the most beautifully designed content can be ignored or overlooked if it is not artfully placed and properly noticed.

In short, marketers need a tangible, objective way of measuring the immediate visual impact of their content. If you want to figure out when consumers are turning a blind eye [sic], you need to get tracking.

Eye tracking began as a method of gathering data for laboratory research. In psychological science, there is a long and rich history of using eye movements to draw conclusions about how the mind works. As the saying goes, the eyes are windows to the soul. At the turn of the 21st century, eye trackers were primarily large apparata that sometimes immobilized research participants into a posture not so unlike the unfortunate protagonist of A Clockwork Orange.

However, as in so many fields, the last two decades have seen a dramatic technological revolution in the way that eye tracking is performed. The eye movements of a consumer can now be tracked in real time using comfortable, portable, inexpensive, and unobtrusive technologies.

Using contemporary eye tracking technologies such as iMotions, marketers have the ability to aggregate data on where consumers are looking and when. This provides a window into the opinions and implicit biases that are buried deep below the surface, and wouldn’t appear in an interview or customer survey.

The consumer’s eyes can tell you things about your product that they might not even know themselves.

This data on the consumer’s visual and emotional responses, which may lie below the level of ready awareness, can then be utilized in a host of different applications. Possible uses for eye tracking data could include testing advertisements across print, television, and online platforms, as well as testing product packaging, branding, and messaging both in and out of stores.

In essence, any time you want to catch the consumer’s eye, eye tracking can tell you if you did.

Think back to that time when I split

a sentence of text onto two separate lines, without giving any warning. (I just did it again, I know.)

In this small and rather juvenile example, by playing with your visual expectations, I exerted some measure of control over you.

Knowledge is power. When you’re able to aggregate serious data on where the consumer is looking, when they look there, and how they feel when they look, only then do you become able to make decisions from a place of knowledge, rather than guess and wonder how the consumer will react.

In the end, it’s time for you to start thinking about eye tracking. All eyes are on you to make the next move!

If you think eye tracking deserves a closer look (I can go all day with these eye puns), check out the following infographic for helpful info on the science of the eye, technical specifications of eye tracking equipment, and best practices for eye tracking research.