I get it. The IPO is coming, and even though Facebook is the largest seller of online advertising, it has massively under-monetized its inventory due to the relative paucity of big-brand spend. Most of Convince & Convert’s clients are larger corporations (or the agencies that serve them), but we’re a small business and work with a few as well, and I never thought I’d yearn for the cozy embrace of Google and it’s methodologies and mechanisms that were – and are – small biz friendly.

In word and in deed, the new design and rules accompanying the new Timeline version of Facebook pages is a boon to big business, and a blow to small business.

Sure it’s visceral to have a 850-pixel signature image dominate your Facebook page. But for small businesses that lack existing photography and/or personnel with the creativity and time to get something created for the Facebook Cover, it’s a burden not an advance.

Facebook wants businesses to act and interact like people, and banning promotional language on the Cover image is one way to enforce this “engagement trumps calls-to-action” philosophy.  About the new Cover photos, and in particular Facebook’s ban against promotional messaging in them, Facebook design lead Sam Lessin said:

“The key with cover photos is storytelling and expression. We want to create a good experience for everyone, and we think these guidelines really help brands… They’re encouraging people to create engaging content that people want to come back to and create and emotional connection with.” (quote from VentureBeat)

Creating emotional connections is a luxury that is out of reach for small businesses where the Facebook page manager is doing so on her lunchbreak.

3. Death of the Landing Tab

One area where small businesses could excel in “old” Facebook was with the default landing tab. This became a de-facto landing page/microsite for many companies, and made it relatively easy to drive fan behavior – especially when using inexpensive software. Of course, Facebook killed it in Timeline.

For big businesses that can and have embraced other ways to drive “likes” however, the death of the landing tab is less troublesome. Said Roland Smart, Director of Product Marketing at enterprise social media management software company Involver (whom I interviewed about Facebook’s changes)

“I don’t think it’s a big deal at all. Facebook users aren’t spending a lot of time browsing around. They are getting to the Nike Facebook page via a link on the Nike website, through an ad, or through a link on the Facebook Wall.”

The new ability to highlight posts to make them double-width, combined with the option to “pin” a post to the top of the page for up to 7 days (but not both on the same post) is being touted as a big advance. For larger companies, I agree. But for small business, having to now not only figure out what to post to Facebook but also what to star and pin creates additional editorial calendar pressure and complexity that many are unprepared or under resourced to tackle.

Presumably to keep the Wall chatter more positive and to stop Twitter’s march toward becoming the default place for social media customer service, Facebook is offering an (optional) feature whereby people can send direct messages to businesses. Note that people must initiate this interaction, brands cannot direct message people unilaterally. This seems commendable, but for small business it’s now one more “inbox” that must be monitored and responded to in as close to real-time as possible.

On each Page, the new Timeline version prominently displays the interactions that your friends have had with the brand, as well as all activity on the page. Thus, if a small business is not willing or able to update the Page on a regular basis (at least daily) the design of Timeline will make that lack of activity glaring and garish. Perhaps that’s a good thing, and companies that can’t update their Page shouldn’t be on Facebook at all, but it’s still a change that doesn’t favor the small guy.

Despite the fact that it continues to proclaim its disinterest in entering the social media management business, Facebook embraces its ecosystem partners with one hand, while slapping them with the other. Posting to a Facebook page using some third party tools often results in status updates that are displayed with less visual prominence than content entered directly at Facebook.com.

For small business that rely on third party tools to save time and boost social media efficiency, this is a problem.

To provide additional real estate for apps, Facebook has changed (again) the maximum width from 520 to 810 pixels. This isn’t a catastrophe, as legacy, narrower apps will float in the center of the newly wide page. But eventually, apps will need to be widened or overhauled entirely, creating another issue that small business needs to address.

(Fortunately, several low or no cost software options are already available to assist in this process, including Lujure, North Social, Short Stack, Tabsite, and Agorapulse).

Says Involver’s Roland Smart, “Facebook is sending a clear message about experimenting with new ad units that Madison Avenue will enjoy.” Indeed they will, and at the expense of small business. The targeting potential of Facebook ads is unprecedented and extraordinarily powerful. But, this opportunity to hyper-target your message is primarily of interest to smaller business looking for clicks and leads and sales, rather than big business looking for branding and engagement. The new Premium Ads (larger, more dynamic) will be sold to large companies on high-dollar, cost-per-impression deals, reducing the inventory available for the (mostly) cost-per-click Marketplace ads favored by small companies.

From Facebook’s perspective, this of course makes sense, as every seller of advertising would prefer to do so on an impression rather than clicks basis. But for small business, it might hurt. 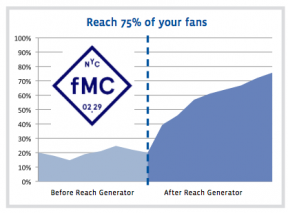 Facebook will now allow large companies (only, for now) to purchase additional “reach” for their status updates via a new Reach Generator option. Sheryl Sandberg – Facebook’s COO – acknowledged that on average the reach of status updates is only 16% – meaning that only 16 out of every 100 of your “fans” actually see your status updates. Compare this to the average open rate for an email newsletter (~25%), and note that Facebook gives companies one third less visibility than does email. But magically, Facebook has found a way to fix this “problem” – by purchasing more ads from them.

Given that Facebook itself dictates the 16% ratio (which is actually higher than the 7.5% – 10% figure researched and cited by Facebook experts like Pagelever.com’s Jeff Widman), based on its EdgeRank algorithm, it’s maddening that they have now essentially admitted that they have been artificially reducing the reach of status updates as a precursor to the rollout of Reach Generator ads (which can put your status updates in front of the eyeballs of ~75% of your fans).

Essentially, Facebook has said that companies need to spend time and money (on apps and such) to acquire “likes” but that the vast majority of those fans won’t typically see updates from the brand, unless the brand pays for it. This is the end of Facebook as a “free” option for brands, and demonstrates such gall and guile it makes me want to scream at my laptop.

Facebook’s built-in Insights statistics platform has been positively Gingrich-like in its frequent changes of direction, and now it’s unveiling real-time stats. The notion is that businesses will be able to instantly know when posts are gaining disproportionate traction, so that they can be immediately turned into paid ads to build reach. This is a nifty opportunity to be sure, but of course will be beyond the reach of small business due to budget and lack of staff to sit around and stare at real-time data streams.

The biggest indicator of Facebook’s new scrapbook mythology is the Milestones function. Brands can now create posts from any time in their history (including long before Facebook existed) and note them as Milestones. This notation shows them in the scrolling milestones timeline on the right hand side of the Page. For legacy brands, it’s a very nice option. For small businesses that may not have the photos to post, the time to post, or the inclination to figure out a backwards-looking historical record, it’s probably a bridge too far.

According to Involver’s Smart, an underreported feature of Timeline is that Facebook apps can now auto-play content – without requiring a user click or other action. This has serious implications for rich media apps and video-oriented Facebook content. A newfound playground for big brands, but probably not something most small businesses will have the dollars or desire to embrace.

My favorite quote coming from Facebook in the announcement of Timeline for brands and the other changes, was this beauty from Facebook’s Lessin:

“We’ve been focused on giving tons of notice. It really helps in terms of people understanding what’s coming.” (quoted by VentureBeat)

Compared to small businesses, Facebook and large companies with staffed social media departments (or consultants like Convince & Convert) have a different sense of “tons of notice.” Thirty days to find a Cover image; replace the landing tab; change about copy; decide what and when to pin and star; figure out how to handle direct messages; reconfigure legacy apps and pick which two will be shown as a default; and potentially add milestones, is actually a frighteningly short period of time for small business – who do not sit around and ponder their Facebook best practices every day.

And one of those four weeks that Facebook graciously offered before Timeline becomes mandatory will be occupied by Spring Break, when many small business owners are on vacation with their families – ostensibly making the memories and images that Facebook craves above all. Oh, the irony.

What do you think?

Please participate in the Quipol below, and then sound off in the comments. How has Timeline been for you?