Tweeting from the Tractor – 7 Secrets to Successful Social Media Farming 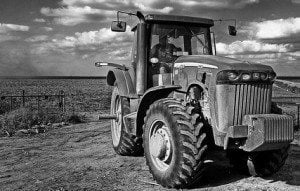 Farming may very well be the second-oldest profession. This will not come as a surprise, but I’ve never farmed personally. However, my family is from Nebraska (Go Big Red) and both sets of grandparents owned farms. So, I’ve spent more than my share of time in a corn field (terrible Wi-Fi).

And while farming has been around so long it’s literally bibical, social media – all post-modern and zeitgeisty – shares several core elements.

Are you a successful social media farmer?

You don’t just cultivate whatever grows naturally on your land. That’s called weeding, not farming. Farmers determine what to grow based on expertise, market conditions, and topography.

In social media, it’s important to interact with customers and prospects in real-time when relevant, but if you’re going to create brand communities to facilitate those exchanges, you can’t be everywhere. What’s right for your organization? Facebook? Linkedin? Twitter? A corporate blog? YouTube? Ning? You have to make a clear-headed decision about where you’re going to deploy your social media resources, and that decision is best made with a heavy dose of strategic thinking, and a “tools last, not first” mentality.

Those crops don’t just spring up magically, you know.

Unlike traditional marketing and advertising, one of the huge advantages of social media is that the content you create pays dividends over time. Every blog post, photo, video, Webinar and other content seed made by your organization and/or your fans will continue to generate page views and awareness into the future.

The immediate impact of most social media campaigns isn’t nearly as high as a major print ad, TV commercial, or PR hit in a daily newspaper. But over time, the seeds of social media continue to grow, while the one-shot-deal of traditional marketing is forgotten.

The growing cycle is measured in months, not days.

Those expecting instant social media success will be disappointed in nearly every instance. First, you have to listen to your community to determine norms, best practices, and current attitudes. Then, you have to pick your crops and plant your seeds. And only then do you begin to see incremental results.

The good news is that social media results are typically compounding. What you did well yesterday makes today more successful.

4. It Takes a Village

At harvest, the community comes together to help the farmer during his time of acute need.

The Golden Rule of Social Media = Be Helpful. Help your customers. Help your fans. Help your competitors. Help everyone that asks, and even those that don’t ask.

Social media (both personally and corporately) rewards those that give more than they take. (which of course is a philosophical sea change for many companies that are accustomed to a more linear and inward-facing approach)

The farmer’s life is ruled by the market, and planting decisions are usually governed by how the farmer believes he can sell the successful crop.

The same should be true in social media, but often isn’t. Not to put an entirely capitalist spin on this, but at some level social media engagement needs to save companies money, make them money, or both. Yes, it’s terrific that social media rewards (if not requires) a customer-centric mindset that can be transformative for companies. But that transformation is not going to happen if it doesn’t pay off at the end. Comcast provides killer Twitter customer support because it works and it’s cost-effective, not because it feels good.

Companies – with help from their agencies – need to start developing a much better sense of why they are engaging in social media before jumping into the middle of the fray. What’s the go to market strategy?

Farmers don’t grow the same crops on the same parcel of land every season. The land can’t support it, so crops are rotated around the farm.

Smart social media practitioners are beginning to recognize the same phenomenon. The crops you’re growing today may not even exist tomorrow. How many corporate Twitter accounts were there WAAAAAY back in 2007? Pre-2006 you had to be in college to be on Facebook.

Further, if your social media efforts are TOO concentrated in one area, you can end up preaching to the choir, reducing your overall impact. I advocate companies participating in ~ 3 social media outposts in earnest, but emphasizing a different one every quarter. The varying levels of effort will keep it fresh for fans and your internal team.

Is there a more frustrating business than farming? You do everything right and WHAM – freak hailstorm wipes out your whole crop. No wonder farmers are religious.

Social media has many of the same risks. It’s unlikely that you’ll get burned in a Domino’s-style imbroglio, fueled by social media. But you might.

Consequently, you’d be well-served to put together a social media crisis communication plan that dictates who would respond in your organization (and how) if a crisis ever occurs. Don’t forget that social media isn’t 9-5, so figure out your protocol for nights and weekends, too.