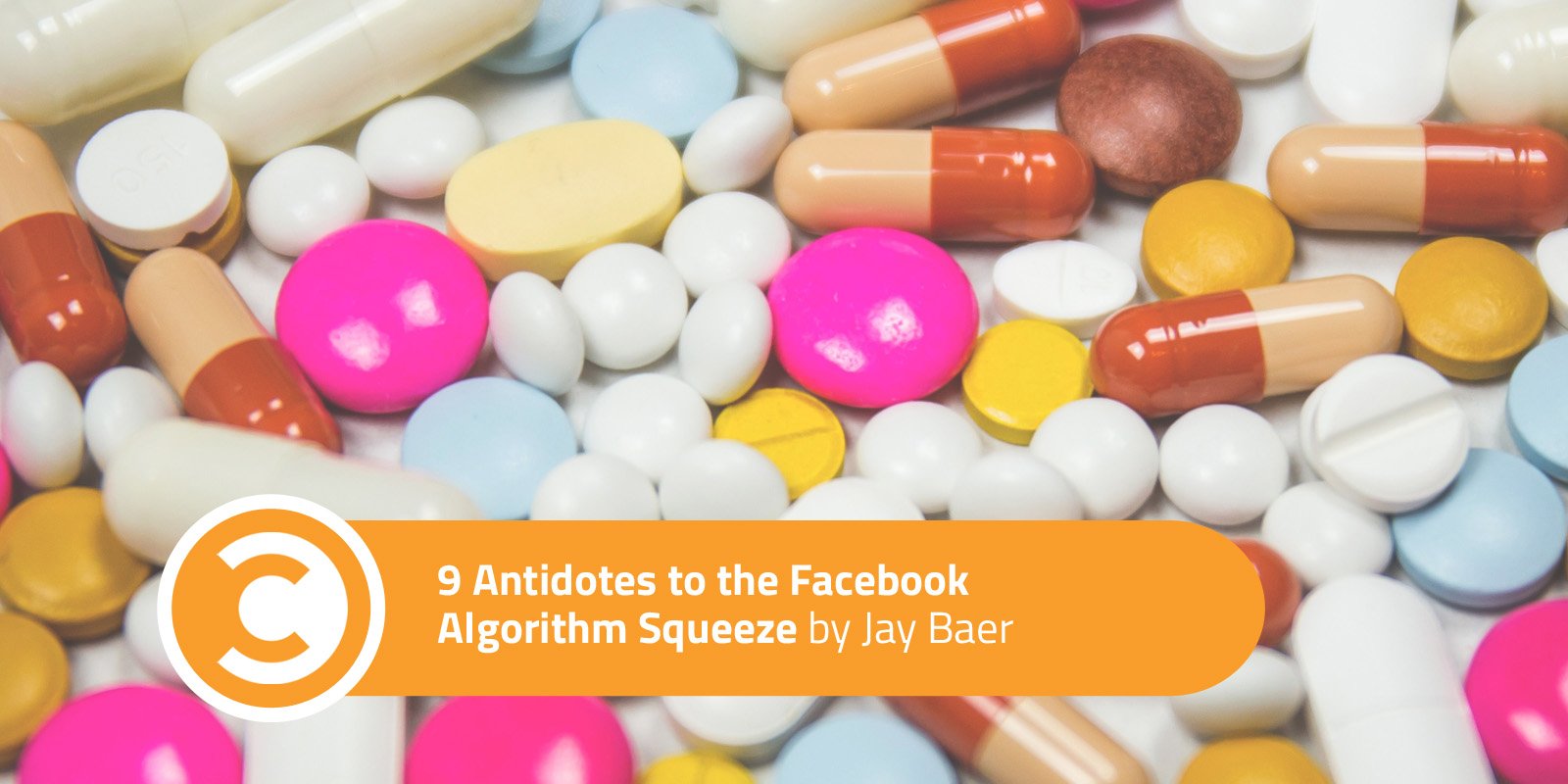 “. . . prioritize posts that spark conversations and meaningful interactions between people. To do this, we will predict which posts you might want to interact with your friends about, and show these posts higher in feed. These are posts that inspire back-and-forth discussion in the comments and posts that you might want to share and react to—whether that’s a post from a friend seeking advice, a friend asking for recommendations for a trip, or a news article or video prompting lots of discussion.”

In this release, they also acknowledge that organic reach among business pages will dwindle, and that “engagement bait” posts such as “click like if you want this puppy to live” will be algorithmically punished.
Reactions to this move were immediate among the social media cognoscenti, and ranged from full-blown “The sky is falling” mode to “So what?”
Now that everyone has engaged in their newsjacking (the Social Media Examiner BREAKING NEWS video got 273,000 views, and spawned a ton of traditional media opportunities for Mike Stelzner—well played!), let me tell you what all of this really means.

The Facebook Algorithm Separates the Wheat and the Chaff

First, this move should come as NO SURPRISE. Many people (including me) have been predicting this for years.
Remember this: Facebook is a public company. They have a fiduciary responsibility to maximize profits for their shareholders. They do not have a responsibility to maximize your profits. Of course, if they can further entice you to buy more ads by minimizing free exposure, they will do so eventually.
Facebook's responsibility is maximizing profits for shareholders, not maximizing YOUR profits. Click To Tweet
Further, it is also true that many company posts do not succeed on Facebook today. This is not because Facebook is evil and is trying to convince you to buy ads (although that’s somewhat accurate), but more so because a lot of business content on Facebook SUCKS. It’s a Yellow Pages ad masquerading as an organic social post. It DESERVES to fail. Facebook is just hammering the last nail in the coffin.
Ask yourself this: When was the last time you saw something on Facebook and said, “Wow! That’s great content from a business. I cannot believe it doesn’t have more engagement?” Rarely, if ever. The truth is that Facebook’s algorithm already does a pretty good job of separating the wheat from the chaff, at least among business content. Whether they can keep #FakeNews at bay is a different issue for a different post.

Will this move make it harder and more expensive for businesses to succeed on Facebook? Probably. But it’s not as if you can just log off the platform, throw up your hands, and go home. There are two billion people using it. Don’t give up. You just need to get better, and get smarter.
Thus, here are the 9 Antidotes to the Facebook Algorithm Squeeze. None of these are “buy more ads.” Follow them, and you’ll very much still be able to succeed on Facebook, even as a business page.

The key phrase in the press release is that Facebook is prioritizing posts that “spark conversations and meaningful interactions among people.” Given that this all has to be sorted out in a nanosecond, Facebook has to look for behavior that indicates “conversations and meaningful interactions.” What might that be? It’s not “likes” or “shares” or even “comments” per the release. While they don’t overtly describe the desired behavior, my bet is that they are looking for comments of a certain length, and replies to comments.
This is a “conversation” in social media, a threaded back and forth rather a passive clicking of a like button.
So, when you add content to Facebook, try to post about topics that have more than one opinion. Complex, non-obvious topics will work better than topics that everyone agrees upon.

Right in the release, Facebook admits that posts from real people will take priority over posts from brands. This has been the case for a while but will become even more acute. The more you can encourage your actual customers to post on their personal page (and mention your business), the more likely you are to reach a decent audience.
This is the Facebook version of prioritizing consumer-driven word of mouth.

Similarly, most of your team members have a personal Facebook account. They will likely have a better chance at Facebook engagement than will your company account.
This will be a boon for employee advocacy software programs (I am an investor in a great one, Trap.It) as companies try to encourage their team to carry the messaging water on behalf of the organization.

Facebook says they will de-prioritize viral videos and other content that is passively consumed on the platform. However, they will give extra credit via the Facebook algorithm to content that attracts conversation. Think about how you can post how-to videos, video FAQs, and other interactions that encourage viewers to ask questions.
Using Facebook for customer service and customer support and showing off interesting and innovative product use cases, etc. could be very successful in this new algorithm environment.

Reading between the lines, it sounds like Facebook is going to push recorded video down the priority list a little, in favor of live video. This is because live video is often more urgent and important, but mostly because it routinely generates more conversation. In the press release, Facebook says live video gets SIX TIMES more interactions than regular videos.
If you’re using video on Facebook, it’s time to ask yourself why that video isn’t live. Do you lose some production polish? Possibly. But if the Facebook algorithm is going to push live video up, and recorded video down, it’s absolutely worth trying to make it work live.

Similarly, it’s time to stop random acts of content (one of my 10 Content Marketing Commandments for 2018). This is particularly true on Facebook. If our overlords at FB want conversation, the best way to achieve that is for the people likely to create that conversation to actually KNOW WHEN THE CONTENT IS COMING.
Think of your Facebook strategy like a TV network thinks about their schedule. Every Wednesday, they have the same shows. The shows do not change. Viewers know when to tune in, or at least set their DVRs. You need to do the same. Create one to three Facebook shows and replicate them every week at the same time.

Already, some of the most rewarding elements of Facebook are contained in Groups. Group-created content performs better in the news feed and is often delivered to members via email, depending upon how they have their notifications configured.
If you don’t have a Facebook Group for your best customers, prospective customers, employees, fans, or some other cohort, 2018 is the year to experiment with it. For business, Groups work in ways that the news feed simply does not.

Messenger and WhatsApp are still Facebook’s play to take over the person-to-person messaging space. Already, I bet you’re getting way more notes from your friends on Messenger than you were six months ago. Why? Because it breaks through the clutter of the inbox, and it’s easy to add multimedia.
Adoption isn’t universal yet, but it’s moving quickly. If you can develop a solid Facebook Messenger bot that can deliver solid content to your audience, the response rate is MUCH HIGHER than for email, and INFINITY HIGHER than for the news feed. You want people to see your stuff? Get them to subscribe to your bot.
Want to see how it works? Click here to subscribe to my bot, and I’ll send you cool stuff now and then.

Remember that when you publish content on Facebook that does NOT succeed, it impacts the likelihood that the next piece of content will succeed. This means that the rich get richer, and the boring get forgotten. When in doubt, do NOT PRESS PUBLISH unless you’re fairly certain the content will indeed create conversation.
I use “The Mom Test” to help with this decision. I ask, “Would my Mom, who loves me unconditionally, engage with this content?” If the answer is “yes,” then at least you’re on the right track. If the answer is anything else, think very long and very hard before posting, because if your Mom doesn’t love your post, I’m almost positive that Zuckerberg and Co. won’t love it either.
Facebook not giving you the ability to send mediocre content to your customers for free isn’t the end of the world. In fact, they are probably saving businesses from their own worst instincts, in some cases. But all is not lost. You can still succeed on Facebook WITHOUT SPENDING A TON OF MONEY if you follow these nine antidotes.
If my team and I can help you think through these necessary shifts, let us know. Convince & Convert works with many of the world’s most interesting brands. What do we do? We’re personal trainers for digital marketing and word of mouth. If you want to shape up, holler.

How to Include Your Customer Support Team into Your Marketing Strategy

5 Best Tools to Measure Share of Voice on Social Media

5 Ways Crowdsourcing Is Impacting the Future of Content Marketing