A Social Media Gun to the Head

Sometimes, I’ll talk about a brand just to see if they’re listening. Too often, they’re not.

Or, maybe they’re listening, but not responding.

Some companies seem to have a policy of responding to positive comments, but not responding to negative comments. I think this falls into the “we don’t want to make it worse” school of social media interaction. I’ve heard t his explained with “if we answer, it legitimizes the complaint.” And while I understand that concept historically, I’m not sure it works today. An unfortunate reality of social media is that we’ve jumped the shark of jurisprudence. People, causes, companies are presumed guilty until proven innocent.

How many times do you see tweets along the lines of “hey, maybe we’re all jumping to conclusions here, and (company) isn’t so bad. Maybe it’s all a misunderstanding.” I’ve seen this somewhere between zero and one times. It’s much more exhilarating for people to get caught up in the tsunami of real-time public opinion than to be the voice of dissent (or the voice of decent, for that matter).

Consequently, is corporate silence on Twitter (and elsewhere in social media) cagey, safe, or foolish? 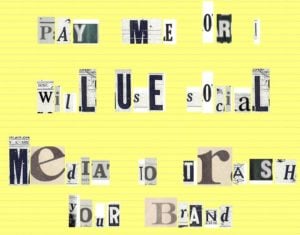 Last week, United Airlines finally succumbed to massive social media pressure, and donated $3,000 to the Thelonious Monk Institute of Jazz in the name of pissed-off customer and YouTube sensation Dave Carroll. This after the video made by Carroll as a result of his guitar being broken by United baggage handlers, had been viewed more than 3 million times, and been mentioned on CNN, CBS and Oprah.

Am I glad Carroll was compensated by the airline? I guess. But what I don’t appreciate is the fact that the guitar was broken a year ago. Carroll took the opportunity to create a clever video about it, and did so admittedly to help his own flagging music career.

Is it justice that Dave Carroll was able to build his career – at least ephemerally – on the back of United’s reputation?

I certainly believe United would have been A LOT better off dealing with this immediately and turning a negative into a positive by co-opting Carroll and his story. Consider the career-based motives of Mr. Carroll, I suspect he’d have been happy to create a positive video about United, had the $$$ and exposure been sufficient.

Is the Customer Always Right?

I always support the notion that companies should be listening at all times to the social media conversation, and be prepared to respond immediately to the first hint of crisis.

But, are we entering an age where every consumer with a video camera or a sizable Twitter following can hold companies for ransom? Will we see customer service deficiencies blown out of proportion (or even faked) in an effort to extort “make good” concessions from brands? Although massively slow to react, I love the fact that United made a charitable donation to satiate Carroll, refusing to enrich him personally (at least financially) for his stunt.

(Note: Bing Futch immediately commented (see below) on this post, to point out that he did not receive cash from Northwest, but rather a flight voucher. Thanks to Bing for clarifying).

My fear in all this is that it will paradoxically have a chilling effect on brands engaging in social media, as they become more and more concerned about the veracity of claims. Carroll may have got his, but I’m not sure anyone will benefit but him. Certainly not United, and I doubt he’ll help social media customer service as a whole.

I won’t be buying his album. Will you?