Are You Cherishing the Wrong Trophy? 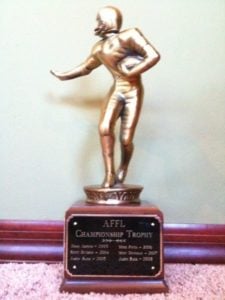 I have been the champion of my fantasy football league two of the past four years, and while I’ve had a rough start to this season, I’m still the defending champion. And while I appreciate the winner’s check, having the trophy on my desk for a year is much, much sweeter.

Trophies are important. They provide tangible evidence of accomplishment, when many forms of achievement in life, business and otherwise are inherently intangible and amorphous.

Social media achievement can be intangible and amorphous, too. So much so that there are whole companies and industries that sniff at social media in its entirety because it’s “not measurable.” But indeed social media IS measurable. I’ll reserve all the ways it can be done for another day (meantime, read Olivier Blanchard, Beth Harte, and KD Paine on the subject). To me though, what’s more frustrating than a misguided belief that social media isn’t measurable is measuring the wrong things entirely. (FYI, interviewing Olivier live on Twitter tomorrow (10/1) at 5pm eastern)

I understand the desire to count your Twitter followers and Facebook fans, I really do. It’s an extremely easy graph to build, the numbers almost always climb steadily upward, and it’s simple to compare against competitors.

But guess what? You’re not in the Facebook fan selling business. Nobody is. At best, number of fans shows some level of directional success, but even then the numbers are often influenced by “social media bribery” (read this great post by Spike Jones)

No Dinner. No Movie.

By my count, it takes 3,200% more effort to visit https://www.convinceandconvert.com/ if you don’t have it bookmarked (shame), because you have to tap 32 keys to get here. Versus one key to become a Facebook fan. I’ve had deeper relationships with single swallows of Scotch than what is required to be a fan on Facebook.

If you want to report your Facebook fans and Twitter followers on your social media results dashboard, I won’t stop you. But please augment that information with a statistical trophy with more meaning.

What’s your single most important social media metric? Care to share? I’ll create a follow-up post with the best comments.