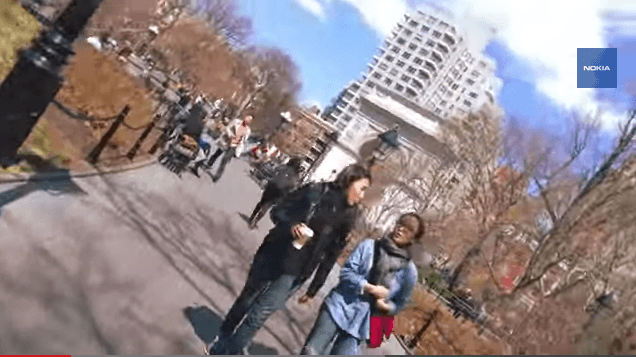 The level of video quality found through smartphone cameras, plus specialty cameras like GoPro, have ushered in a wave of inspiring videos produced by brands and consumers alike (Red Bull Stratos, anyone?).

But, why just use one smartphone or GoPro?

As seen with these new campaigns from Nokia and Volkswagen, strapping multiple devices to an object in motion results in a impressive, 360 degree visual storytelling experience.

For the first time ever, Nokia has taken 50 of its Lumia 1020 smartphones to create an “Arc of Wonder.” The arc looks exactly like it sounds – an arc structure with smartphones each at a different angle and level. Created in partnership with filmmaker Paul Trillo, the arc was developed as part of a special photo and video shoot where more than 30,000 “living moments” in New York City were captured.

In the Living Moments video, the use of the “Arc of Wonder” is evident, as each frame dips in and out of 50 everyday moments in New York City. Each frame serves as a vignette, complete with pieces of conversations and observations, while rolling into the overall story. The end result is equal parts stunning and dizzying, while showcasing the video quality and creativity possible with the Lumia 1020.

Volkswagen has also tapped into the power of multiple GoPro cameras to debut the new Golf GTI in an experiential video called “Turbocharge the Everyday.” The video stars pro stunt driver and Top Gear host Tanner Foust showing the power and capabilities of the GTI while running everyday errands. As Foust speeds, goes through the car wash, picks up friends and more, the few dozen Go Pro cameras attached are capturing the driving experience, allowing for the viewer to see multiple angles from the ride.

When viewing the video on YouTube, viewers are also prompted at different times with the option of toggling between three or four different video settings displayed on the left hand side, such “Hero,” “Whirly” and “V-Game.” Each changes the viewing experience slightly while staying within the YouTube environment.

The video is the first in a series starring other professional stunt drivers that will continue to roll out throughout the month, with the goal of inspiring would be customers and Volkswagen enthusiasts. While Volkswagen is quick to discourage driving like Foust, the company is giving away up to 1,750 GoPro® HERO3+ Black Edition cameras and mounts (for use on a closed course) to customers who purchase or lease the all-new 2015 Golf GTI by June 30th, 2014.

Looking for more inspiration on how to use multiple devices to tell a story from unique angles? GoPro consistently does an incredible job with video content, as seen on the company’s YouTube page.