How POTUS and XJapan Dominated Social Media at SXSW

Over the last week, SXSW has generated hundreds of thousands of mentions. Broken down by film, music, and interactive, it logically was the crowd discussing technology and media that made the most noise over the first half of the festival.

This is due to one large and unique speaker at #SXSWi, the United States President.

As the first currently-sitting President ever to make an appearance at SXSW, President Obama delivered a keynote that addressed how technology can create systems to make the government more efficient and responsive.

Beyond his address to the crowds at SXSW, buzz about POTUS’ visit began before he touched down in Austin. In order for the President to attend the festival, he would also miss Nancy Reagan’s funeral: 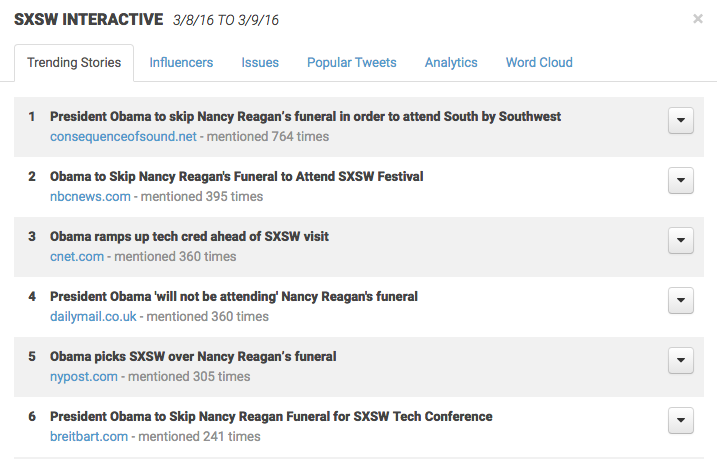 While it was the news that he would not pay respect to Nancy Reagan in person was unpopular, news of his absence was quickly cast aside as soon as the President arrived in Texas. From March 11 to March 13, Obama dominated SXSW conversation on Twitter, with the top five most popular tweets either coming from the President, or discussing him: 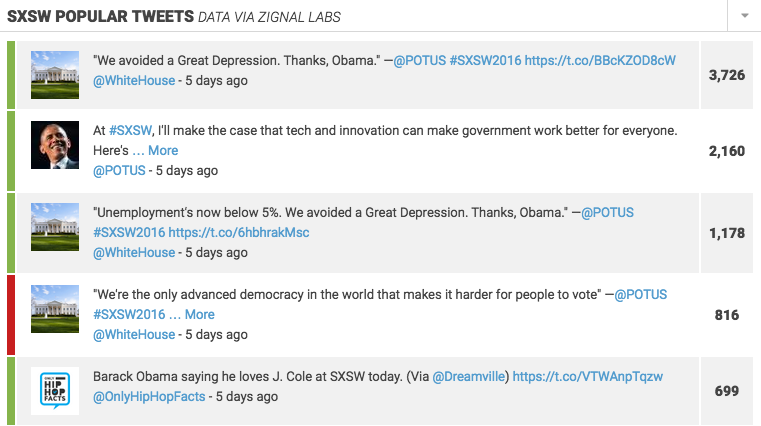 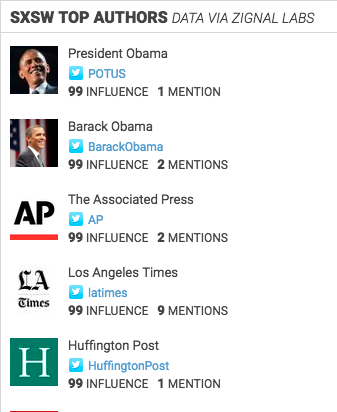 POTUS aside, who else was dominating SXSW Interactive talk?

In terms of who generated the most mentions, Danny Devriendt held the top spot throughout the first seven days, followed by M S Reed Design and Jordon Brown: 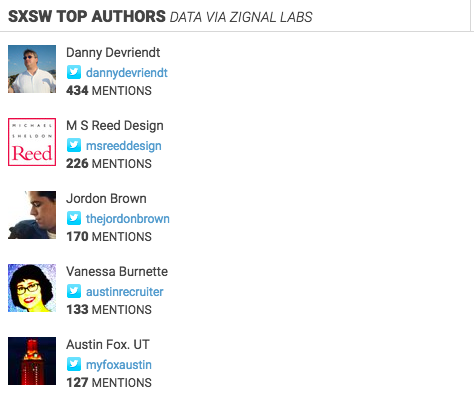 And on the hashtag front, it was First Lady Michelle Obama’s keynote advocating education for girls around the world that stole the show. #LetGirlsLearn, #62MillionGirls, and #FLOTUS were are the forefront of Twitter and Instagram posts throughout the week: 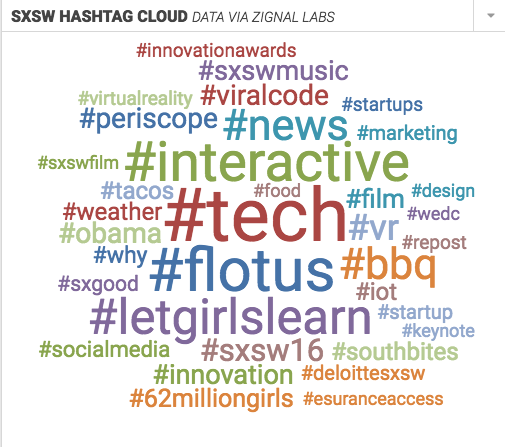 Moving on to the SXSW Film festival, there were two movies that people buzzing throughout the week.

The first, Shovel Buddies, is an American comedy-drama film featuring YouTube superstar Kian Lawley. The actor’s following shot him to the top of the most-mentioned list, as tweets from Lawley and about his film took the top spots over the last week:

While Kian Lawley might hold the top two spots, someone else is dominating the rest of the conversation — all remaining top tweets stem from Japanese musician Yoshiki: 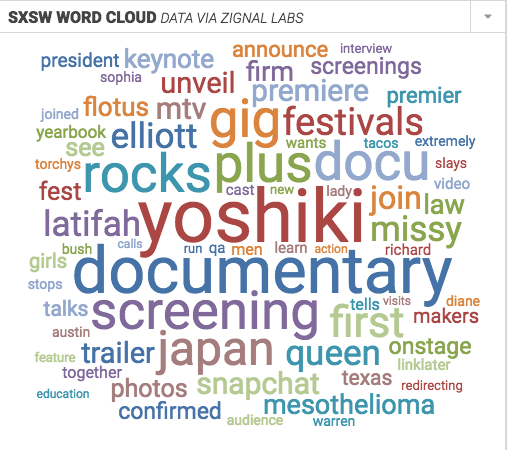 We are X, a film documenting the heavy metal band X Japan premiered at SXSW, and it continues to be a hot topic among attendees and those following the festival. As seen below, the Top Authors within the SXSW film discussion are all fans of Yoshiki: 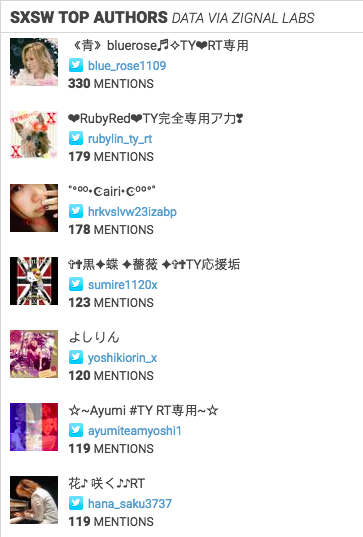 And the Top Hashtags shared alongside SXSW film posts on Instagram and Twitter are of the film, its star, and his band: 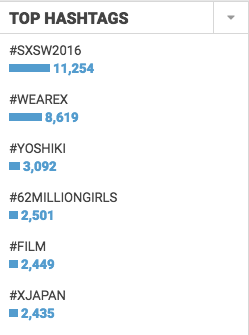 And compared to other films that premiered this week, mention spikes for We Are X were much higher than anything else: 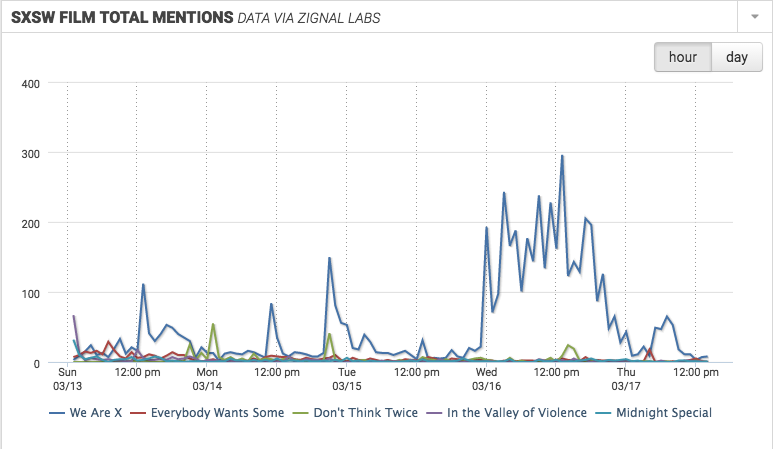 What does this mean for the film? The documentary already has a huge following — by the time it debuts in more mainstream markets, it’s possible that it could be a huge box office and/or critical success, especially in Japan.

During the last weekend of SXSW, emojis were representative of much of the story, with the ghost emoji (?) at the center of the music discussion: 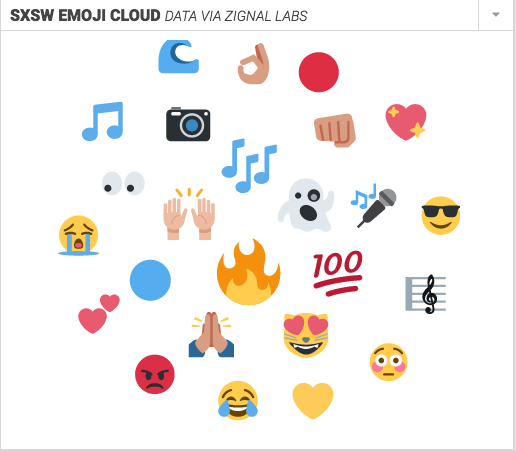 More often than not, ? is used in association with Snapchat, as their logo is a ghost with its tongue out. In this case, the ghost started trending because of this Capitol Records tweet about musician Troye Sivan:

In fact, several different authors used the ghost emoji to indicate they would be sharing SXSW coverage straight from the scene:

Even though ? and Snapchat have no official relationship, the emoji allows for those on Twitter to talk about Snapchat without the extra characters. As Snapchat use continues to grow, use of this emoji could also be on the rise, as well. Spooky, right?

Canadian rapper/Meme phenomenon Drake gave a special surprise performance Sunday night at SXSW, and as illustrated by the word cloud below, it was completely unexpected: 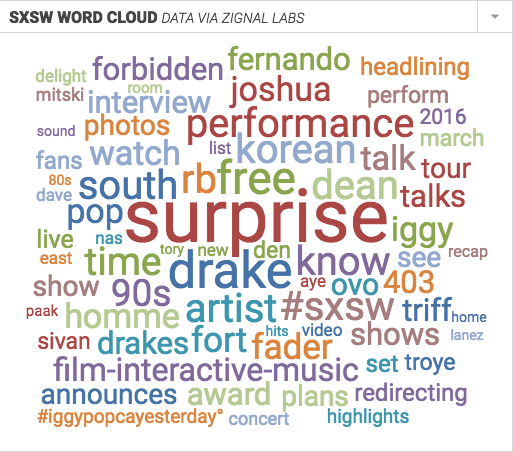 Sometimes events with no prior notice have generated more buzz than anything that was firm on the calendar. And because Drake teased his much-anticipated concert tour during his SXSW set, the shock of the surprise alongside a tour announcement continue to dominate post-performance headlines: 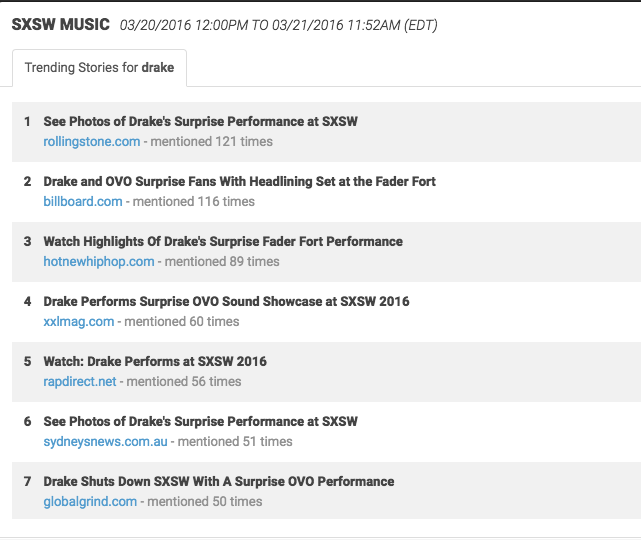