Yes, there are holdouts, but social media adoption is as fast as anything I’ve ever seen. It took at least 7 years for companies to stop asking “why do we need a Web site?” We’ll have nearly universal social media usage at a corporate level long before then.

If you believe Forrester’s predictions on interactive spending, by 2014 U.S. marketers will spend twice as much on social media, as on email. Wow. Email marketing is a pretty fundamental building block of modern communication, and to imagine twice as much being spent on social media is exhilirating. It also scares me to death.

I’m scared because in their zeal to get on the social media train, companies are starting to treat it like a linear equation, like a Paula Dean recipe, like a formulaic summer blockbuster starring an impossibly handsome young man in great peril. 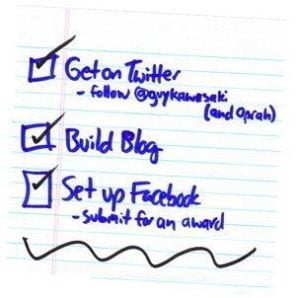 Social media is not a checklist.

“Let’s see. We have a Twitter account. We have a Facebook page. We have a blog. I guess we’ve covered all the bases. We’re all done.”

Your Grandkids Will Be Community Managers

Social media is about fundamentally changing the dynamic between brands and their customers. From master and servant, to peer to peer. That necessitates a nuanced, shifting, sustained effort that requires winning hearts and minds on an individualized level. Just being there isn’t enough.

The checklist approach causes two types of problems. First, companies are engaging in social media without any sort of meaningful, long-term social media strategy that gives a rationale for each component. Maybe Facebook isn’t right for your brand. There’s no law (yet) that says you have to have a Twitter account. Your results may (and should) vary with regard to social media implementation. 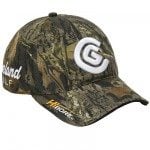 The second problem is that without a strategy, the specific social media tactics tend to pull apart and operate independently over time. The Facebook approach no longer syncs with the blog, etc. This creates the social media version of a golf hat, where you have about 8 different logos in one place, with no apparent reason why they are adjacent, all fighting for a share of attention.

I know it’s all the rage right now. But if you’re going to get your company involved in social media, at that very first kick-off meeting where you convene your cross-functional team, make a very important statement.

“If we’re going to do this, we’re going to do this right. And that means we cannot turn back. Once we’ve engaged with customers in an authentic, human way, to stop will feel like a slap in the face. So, we all need to realize that our social media efforts are likely to continue beyond this quarter or this year. Our social media efforts must be sustained forever, just like our phone number and our Web site. Is everyone on board with that concept?”

Will you tell them that? Have you already?