Is Social Media Too Big For Its Britches?

Maybe what we need is a little deconstruction.

At Monday’s Social Fresh conference in St. Louis, I was delighted to join Sarah Evans, Jason Falls, Amber Naslund, and Zena Weist on the closing panel discussion. During the session, an audience question got me fired up (no surprise, as the Social Fresh attendees were a very smart, engaged group).

A very nice woman (I wish I’d been able to get her name, if you know who it was please leave a comment) asked about discussing the merits of social media participation with a boss who believed it was a fad.

First of all, faddishness doesn’t invalidate. Sure, the Pet Rock was a fad, but it also made $15 million in six months ($56 million in today’s dollars).

Second, the social media tools and destinations will inevitably change, but considering 83% of online Americans are active in social media, and there are 425 million people with Facebook accounts, I think we’re past the lava lamp stage.

But third, and most importantly, conversations about “social media” are amorphous, and largely pointless.

In our zest and zeal, our warm embrace of the transformative power of social communication, we’ve thrown everything we can think of into a bucket, and slapped the “social media” label on it. Our natural desire for compartmentalization and shorthand has caused us to kill the value of “social media” as a descriptor.

You’ll perhaps remember that “social media” was originally coined to reference user-generated content. And our modern definition of “social media” still includes that component. Problematically, however, the “social media” moniker is now also used to describe a great many things, similar only in that they are online, and involve some form of interaction between customer and company.

The difficulty in telling your boss that social media isn’t a fad is magnified substantially by the fact that you and she may be looking at social media through entirely different prisms.

We’d all be much better off if we stopped lumping everything under the social media, and instead focused more on the SPECIFIC outcomes that socialization of business can produce.

5 Primary Ways to Use Social Media 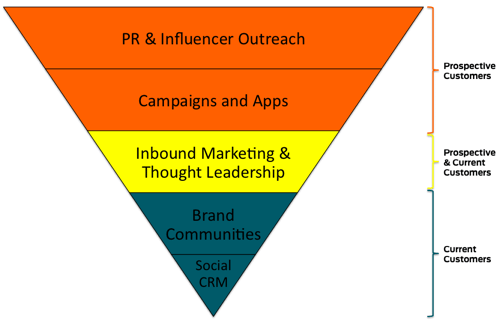 If you’re focused primarily on prospective customers and building awareness there are two options:

1. Social PR & Influencer Outreach
Using social connectivity to introduce your company or products to influencers. In some cases these are members of the media. In other cases, they are the new influencers, bloggers and taste-makers. In either event, your job in this circumstance is to create conversation.

2. Social Campaigns & Apps (social media marketing)
In this approach, you’re using contests, promotions, offers, and self-contained applications and widgets to promote your company or product. Couponing on Facebook, “make us a haiku and win” contests, and most branded iPhone apps fall into this category.

If you seek to straddle the line and reach both prospective (via search) and current customers, here’s your program:

3. Content Marketing & Thought Leadership
Most often used in a B2B scenario, you create and distribute free information snacks so you can sell paid meals down the road. Most blogging, video content, Slideshare presentations, Squidoo lenses and content marketing of that type fits into this category.

If you’re considering “social media” as a way to build loyalty among your existing customers, moving them from a relationship rooted in transactions to a symbiotic relationship anchored in advocacy, there are dual alternatives:

4. Brand Communities
Take your best customers – the 1% that really give a damn about you – and activate them. Bring them together, give them assignments, ask them for input, and turn them into a volunteer marketing army. Certainly, brand communities like My Starbucks Idea and Fiskateers are successful in this arena – and we’ll soon see many more companies using their Facebook fan pages in this fashion.

If you’re talking to your boss about social media, and she’s thinking social campaigns and apps, and you’re thinking social CRM, you’re not even having the same conversation.

I’m not about to banish “social media” from Convince & Convert. I’m not courageous enough to swim against a tide of 110,000 global searches per month on Google for “social media”.

But, will you commit to at least drilling a bit deeper, and talking about 5 ways to use it – in addition to the generic, all-encompassing “social media” Frankenstein we’ve collectively created?