I was thunderstruck by new social media usage data released by Edison Research and Arbitron. In this thorough study of the media habits of Americans ages 12 and up (conducted annually since 1998), the survey authors have put a statistical fine point on something I’ve been pondering for a while: 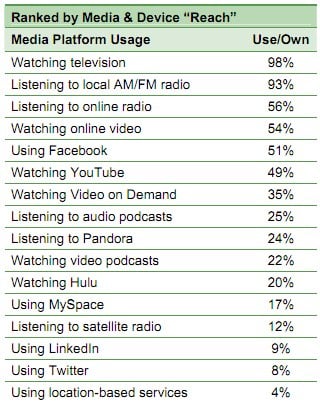 From an audience perspective, I’d say the answer is yes. The Edison/Arbitron results show that 51% of Americans 12+ are now using Facebook. That’s right, Facebook users are now the majority in this country, just like Lady Gaga fans and people that are unsure whether American cheese is in fact cheese at all (that data may be approximate). Three years ago, just 8% of Americans were using Facebook. That’s remarkable.

Conversely, despite its position as the darling of celebs, media, and marketers like yours truly, everything measured in the study is more popular than Twitter with the exception of iPad ownership, eBook reader ownership, and location-based services usage.

Last year, 7% of Americans surveyed used Twitter (and ExactTarget (client) research found 5% follow a brand on Twitter). This year, 8% of Americans use it. That’s not exactly hockey stick growth rates.

Hang on to your sombrero when you read this sentence: MySpace – which has become the butt of social media jokes that SecondLife is too pitiable to inhabit – has more than double the users of Twitter. Double!

300% more Americans listen to Pandora radio than use Twitter. Even Linkedin is bigger that Twitter, and when was the last time you got an invite to a Linkedin-focused conference?

But yet, the media breathlessly reports that Charlie Sheen accumulated one million Twitter followers in a single day. All hail the warlock!

What this data makes crystal clear is that lumping the various social outposts together and interacting with customers and prospects interchangeably across these venues is entirely a misguided approach.

All too frequently, Twitter and Facebook are chained together strategically and tactically, as if they are two sides of the same coin. They are very clearly not, as the size of the participating audiences, and expectations and behaviors of those audiences differ dramatically.

I asked my friend Tom Webster, author of the study (and also proprietor of the outstanding BrandSavant blog that I strongly recommend you read) about this Facebook vs. Twitter audience issue, and whether it means Twitter is overrated. It depends, he says:

The temptation, I think, will be to see Twitter as smaller, and therefore less important, than Facebook. Certainly, Facebook is the gateway to the masses, since it now reaches the majority. For brands and businesses, however, the differential character of Facebook users and Twitter users means that for some products and companies, Twitter might indeed be the best channel for outreach and customer communications, while for others…it might be terrible. It’s imperative for companies to cut past the hype, do their own research, and be where their users are, not where the noise is.

For a second perspective, I asked my friend Morgan Stewart of digital research and consulting firm Trendline Interactive (and co-author of the ExactTarget study cited above) about his reaction:

The report highlights an important reality: Twitter appeals to a niche audience. Most people simply have no interest in the real-time, condensed form of communication Twitter facilitates. However, this does not mean that Twitter’s role is insignificant or that its’ importance is overrated.

Comparing Facebook and Twitter in this manner is like comparing shopping malls and fashion shows. Malls, like Facebook, have mass appeal and are an expression of larger culture. In contrast, while only a small subset of the population actually attend fashion shows, the interactions that happen there influence the larger culture. Twitter is where online influencers congregate and share new ideas, and that alone is significant.

My takeaways from this findings are these:
1. I need to do more on Facebook, and not be as Twitter-heavy as I have been
2. Facebook is now almost a required element, even for B2B
3. Twitter is increasingly a highly targeted element, used to reach and interact with particular audiences (more akin to PR in some ways). Twitter is of course also a must-do customer relations vehicle for most companies

What are your takeaways?