Build Your Brand by Marketing Sideways 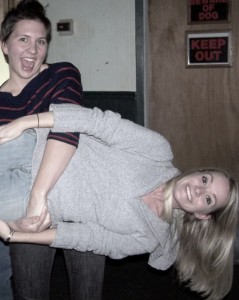 Marketers have been told for years to focus on benefits, not features. In this new era of marketing, you can toss both out the window.

I wrote a post recently on Marketing Profs Daily Fix about finding your one thing in social media, and building your outreach efforts around it. The one thing isn’t something obvious. Instead, it’s an unusual aspect of your operations or corporate culture that often requires some anthropological thinking to uncover.

Once you find the one thing and build social media marketing programs around it, you are marketing SIDEWAYS, not head-on. You’re using a peripheral but more human and interesting component of your brand to tell a story that compels your customers and prospects more so than any product feature or benefit.

Jerrod, the King of Sideways

As chronicled in “Made to Stick” (an outstanding book about storytelling), perhaps the most famous example of marketing sideways is Jerrod from Subway. With Jerrod, they didn’t tell you about characteristics of their product, or even overtly preach the dietary benefits. The one thing was Jerrod and his story, and they successfully marketed Subway sideways for years.

The Subway campaign that preceded Jerrod was “6 under 6.” Six sandwiches with less than 6 grams of fat. From a features and benefits standpoint, it is exactly the same message. Yet from a storytelling and marketing sideways perspective, the differences are enormous. As a consumer, you care about Jerrod. You couldn’t give a damn about “6 under 6.”

While reading AdAge last week I stumbled across a fantastic new campaign for Heinz in Skandinavia that is the epitome of marketing sideways. Envision the guys at Daddy, in their agency offices in Stockholm. They win the business for Heinz (yea!) and then have to figure out something engaging about ketchup to do online (uggh).

But, they figured out the ONE THING about ketchup, which is that it isn’t made, it’s grown. And then they built a brilliant social media marketing campaign around that one fact. 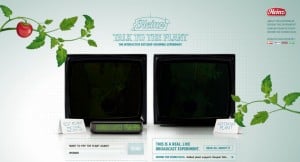 Talk to the Plant test the theory of whether language aids in plant growth. They have two tomato plant growing side by side, on a 24-hour live video feed. The control plant just sits there. But the test plant is barraged by verbal messages (15,693 so far). You type in what you want to tell the plant, and a text to speech translator “talks” to the plant live, for you and everyone else to hear.

Hugely intriguing, and accompanied by a great “behind the scenes” blog and message tag cloud, the project barely mentions Heinz (other than a small, omnipresent logo and link). But, you get the message. And my opinion of Heinz as an interesting and groundbreaking company has changed significantly.

Am I just a sucker for out-of-the-box advertising? As a life-long marketing professional, probably so. But I’ll take Talk to the Plant and other sideways marketing efforts over “Zero Down, No Financing for 12 Months” any day.

What’s your sideways marketing plan for 2009?