Let’s not lose our minds, okay?

Sure, social media is transformative, because it changes the company to customer relationship from its historical “master and servant” to something closer to “peer to peer.” But even transformative shifts don’t dictate that you can rewrite rules and rationality.

Baseball is the longest of professional sports seasons. 162 games (after 40 practice contests in the Spring), spread over more than half a year. There’s a baseball axiom that says a team will win 60 games and lose 60 games each year on general principle and randomness. It’s the other 42 games and their outcomes that separate good teams from terrible ones.

Social media is the 42 games of your business. 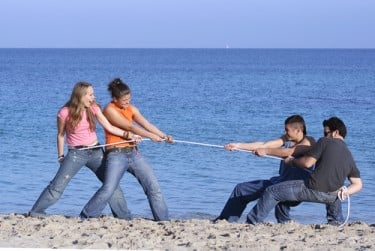 If the other guy has a better product, a cheaper product, better customer service, or some other core advantage over your offerings, you’re going to lose 60 games worth of customers. It doesn’t matter whether your social media program is full of unicorns and smiley faces and followers and Mashable praise. Inferior companies will lose at least their fair share of purchase battles.

Conversely, if you have a better mousetrap, awesome customer service, low prices, or other attributes, you’ll get your share of customers whether or not you ever tweet a single thought.

But for the fence-sitters, the customers trying to decide between you and your competitor, or trying to decide whether or not to order from you again, social can be the crucial tie-breaker. The kinship that social can build between your company and your customers and prospects can help you win those toss-ups. We want to buy from people we know, like, and trust. Social helps build those bridges, given us an edge when customers are trying to decide between two very similar purveyors. It’s the secret weapon. The nitro boost. The clutch base hit in the bottom of the ninth.

I firmly believe that social’s true calling is to move customers into more and more valuable RFM and Lifetime Value segments by nudging them to buy more, buy more often, and encourage their friends to buy too.

The idea that somehow social media – despite its many charms and advantages – is going to magically create tens or hundreds of thousands of new customers for you out of thin air is a fallacy. That doesn’t mean it’s not powerful, it’s just not as all-powerful as some folks would have you believe.

Social is an important part of an integrated marketing program, not a replacement for one.