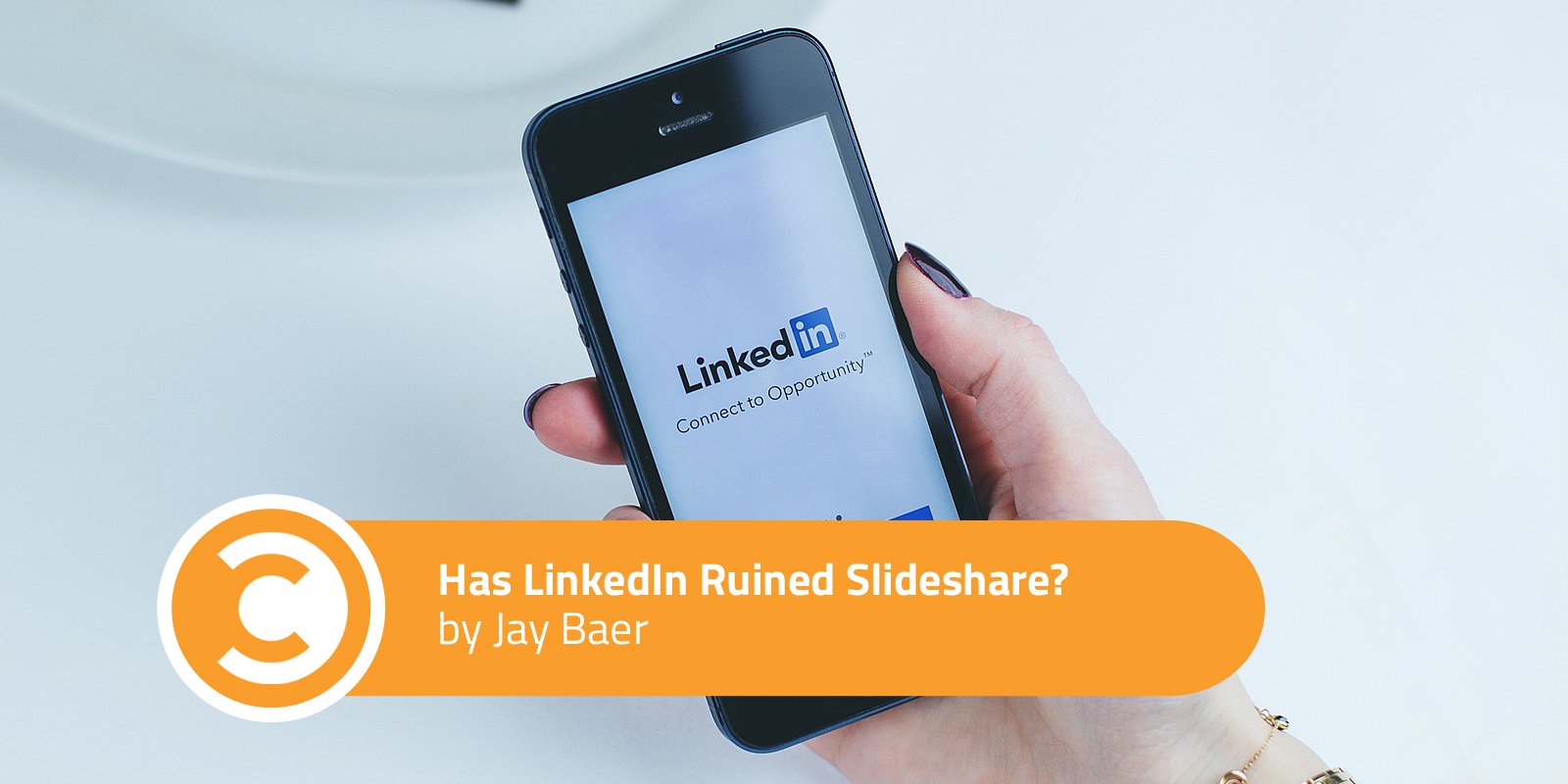 I love Slideshare. The “YouTube of presentations” was at one point the number one destination for business owners and managers. It sported better demographics and site visitor loyalty than even LinkedIn. It was one of the top 100 most visited websites on the planet. Maybe that’s why LinkedIn bought it for $119 million in 2012, padding the nest eggs of serial investors and Slideshare backers Mark Cuban and Dave McClure, among others.

It was a smart deal—and a good price. In those days (which seem SO long ago, even though it’s been just five years) LinkedIn fancied itself as the content hub for business. It’s about the same time that they started the influencers program and enabled publishing (blogging, really) on the Linkedin platform.

I wrote a post in 2015 called “Is Slideshare Digital Marketing’s Secret Weapon?,” and I meant it. But it’s not true today.

Since the acquisition, the entire proposition has started to fray like a hem on a K-Mart dress. First, they eliminated the popular lead generation capability that allowed Slideshare users to garner email signups in exchange for content. They also changed how users could customize their Slideshare home pages. The promise at that time was the monthly introduction of new features for all users. That lasted about . . . one month.

Next, LinkedIn paid $1.5 billion for online training company Lynda. That’s 13 times more than they paid for Slideshare, so certainly that was going to be a priority. Note how the Slideshare home page now prominently features online courses? And that each of those featured courses has updated in the past three hours?

And then, the big move: Microsoft bought LinkedIn itself for a whopping $26 billion—in theory, to drive usage of Skype and finally give Microsoft SOME sort of social network (beyond its investment stake in Facebook). Wired, however, speculates that it was really the world’s biggest acquihire, giving MSFT access to the sparkling reputation of LinkedIn founder Reid Hoffman, who recently joined the board of directors.

Whatever the underlying cause, the effect of the past five years of LinkedIn ownership of Slideshare has been severe atrophy. Like Paul Sheldon’s leg at the end of Misery, Slideshare is now but a shriveled appendage.

First, traffic to Slideshare has fallen off considerably. This is despite the fact that three-quarters of all content marketers are creating more content than ever, according to Content Marketing Institute and MarketingProfs. To be sure, not all (or even most) of that content is in the form of presentations and ebooks (the most common content types found on Slideshare). But you would think more content would equal more Slideshare usage. But it hasn’t, probably because of points two and three.

Second, Slideshare has jettisoned their editorial team, for the most part. At its apex, part of Slideshare’s appeal was its curation, including regular promotion of new and interesting presentations to the site’s home page in the “Today’s Top Slideshares,” “Featured Slideshares,” or “Trending in Social Media” sections.

A screen grab from November 30 shows that “Today’s Top Slideshares” were uploaded to the site 51, 55, and 61 days ago. Freshness! And the “Trending in Social Media” section is almost laughably ancient. Amazingly, the top two presentations “hot” on Linkedin and Google Plus were created FOUR YEARS AGO. Trending on Facebook? Presentations uploaded one year ago. On Twitter? Just nine months. Again, this is on the home page of a site that was in the top 100 in the world in the recent past.

Perhaps it’s simply a labor issue. An examination by my pal Mathew Sweezey using Linkedin found that the only employees still working on Slideshare appear to be a handful of engineers.

Third, Slideshare now appears to be making puzzlingly awful customer experience decisions. I have no idea if this is correlation or causation. But in my long career in digital, I’ve found that when engineers  run CX, customer friendliness typically doesn’t surge.

In his own post about the troubles at Slideshare (which inspired this one), Sweezey noted that Slideshare now prohibits re-uploading of Slideshares. Plainly, this sucks. The issue is that if you upload something and decide to refresh it later (fix a typo, add a slide, tweak the headline) you now cannot do that, despite the fact this has been a feature since essentially day one of the platform.

Now, Slideshare demands that you upload an entirely new version of the file. That means any comments, shares, or links you’ve created and propagated across the web will be null, void, or dead. Hurray. Want to add a new slide six? Start over, pal.

Maybe this is just the way it has to go? Maybe platforms that emphasize longer form, written content are doomed to be dominated by platforms featuring short form, video, and disappearing “story” content? After all, Slideshare’s evident and imminent demise comes on the heels of the death of Squidoo and the business model shift and subsequent near-irrelevance of Scribd, among others.

But I would think that a business social network (or whatever LinkedIn considers itself to be at this point) would see value in being the world’s only meaningful hub for presentations for businesspeople. But maybe I just don’t get it?