A Politician Shows Us How To Do Local Social Right 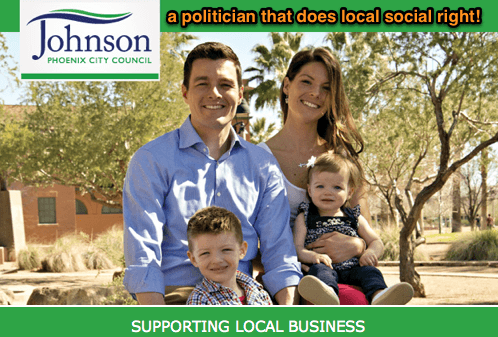 I’ve been saying it for years, and I’ll keep saying it: we’d all be better off if we worried more about being social, and worried less about doing social media (tweet this). It’s nice to have a new example of this principle in practice.

Justin Johnson is a candidate for City Council in Phoenix. He seeks to represent District 4, which is an enclave of historic and gentrified areas, replete with small, interesting businesses. To put his money where his mouth is, he has committed to holding all campaign meetings, donor meetings and other events in local restaurants located in the district. Terrific, right?

But here’s the rest of the story… 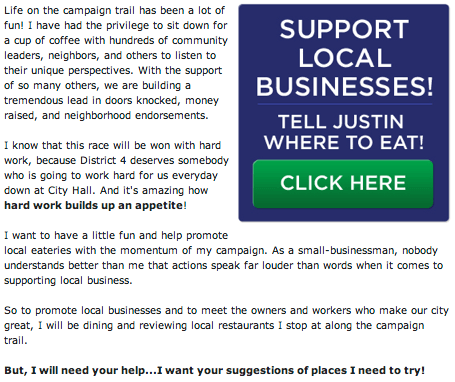 Justin Johnson is partially crowd sourcing his dining locations, asking his supporters for suggestions on where to eat/have meetings, and then is posting reviews of each restaurant on Yelp and his Facebook and Twitter feeds.

Here’s an excerpt from an email he sent last week to promote the initiative:

“…I want to have a little fun and help promote local eateries with the momentum of my campaign. As a small businessman, nobody understands better than me that actions speak far louder than words when it comes to supporting local business. So to promote local businesses and to meet the owners and workers who make our city great, I will be dining and reviewing local restaurants I stop at along the campaign trail. But, I will need your help…I want your suggestions of places I need to try!”

Armed with suggestions from Phoenicians, the candidate is eating his way through his district, reviewing each stop along the way.

Local Social with a Human Touch

Justin may not have the local restaurant review community worried for their jobs, but his Yelp contributions are fairly comprehensive, although he is a generous critic (as you might imagine – the guy IS looking for votes after all!) He even checked in on Yelp when doing the review, smart! About the St. Francis (one of my favorite spots in Phoenix) he wrote:

Went to St. Francis for lunch about a week ago with my team and we sat out on the patio. What a great experience! It has an absolutely amazing atmosphere and the food couldn’t be better. I ordered the pork chile verde and and it came out piping hot simmering in a skillet with a side of cornbread. This is probably one of my favorite dishes there even though everything is amazing. I ordered it with a fried egg on top which I also highly recommend. We will definitely be coming back here very soon. (5 Stars)

This isn’t a particularly complex social media case study, and that’s why I love it. Justin Johnson connects many of the important dots: humanization, local, crowd sourcing, UGC, mobile in one simple program. Bravo!

What do you think of Justin Johnson’s initiative?