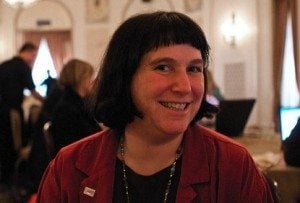 Beth Kanter is perhaps the best-known, most-respected voice in the world on the subject of using technology in a non-profit setting. A consultant to non-profits since 1993, her blog is consistently ranked as one of the best in marketing – and for good reason. It’s full of the kind of practical, tangible, viable advice that all organizations (not just non-profits) need in these crazy days of social media.

Named by Fast Company Magazine as one of the most influential women in technology, Beth participated in a live Twitter interview on July 14, 2009, covering a wide range of ideas and best practices for harnessing social media for social good.

1. @jaybaer: Does social media represent an evolution for non-profits, or a revolution? Does it change the game?

3. @jaybaer: Does social media work better as a campaign for non-profits, or as an ongoing program?

4. @jaybaer: Is the messenger as important as the message? Seems like the asker is a critical component in social media for social good.

5. @jaybaer: To that end, many people struggle with blending of personal/professional. Isn’t that blend required for personal appeals?

6. @jaybaer: Social media levels playing field, but w/ so many NPOs jumping in, does it create dissonance for donors? How do they parse?

7. @jaybaer: Similar to what’s happening w/ Social CRM, do you encourage NPOs to add social media interactions to their database? How?

8. @jaybaer: Do you see local NPOs generating more out-of-market connections & donors due to social media outreach? Is that a benefit?

9. @jaybaer: How do you feel about Facebook? Seems a natural for many NPOs. Concerns about too many eggs in that basket?

10. @jaybaer: I’m seeing some NPOs neglect their Web presence due to excitement about social media. Do you agree? Remedy?

11. @jaybaer: Most NPOs are resource constrained. Yet, social media requires a lot of blocking and tackling. How do you make it work?

12. @jaybaer: You write a lot about matching social media tools to the audience. How can NPOs best do that research? Donor surveys?

14. @jaybaer: NPOs have a lot of interactions w/donors & customers. It’s not perfect. Should NPOs have a social media crisis plan?

15. @jaybaer: You’ve done a lot of work and contributed to a lot of wikis. How can orgs use wikis and crowd-sourcing more effectively?

16. @jaybaer: Much of your wiki is great stuff from your head. Some consultants fear giving away the “secret sauce” for free. Not you?

17. @jaybaer: You wrote for the upcoming book Psychology of Facebook. What’s the key takeaway? (We’ll still buy it)

18. @jaybaer: You speak at a lot of conferences. What makes a great event these days?

And about backchannels at conferences http://bit.ly/127FaR (read this, it’s an amazing post) – jb

19. @jaybaer: Congrats on being named 1 of the most influential women in tech by Fast Company. Richly deserved. How does that feel?

20. @jaybaer: You’re now the visiting scholar for the Packard Foundation. What does that entail? Will we see less of you? 🙁

Wow. By FAR, the most links to other amazing resources of any Twitter 20 interview to-date. It’s like an interview and wiki mash-up. Great job by Beth Kanter. Thanks to all who tuned in.

What was your favorite answer by Beth? Mine was “Facebook is a friend raising tool, not a fundraising tool.” I’ll be using that one again. You?

(photo of Beth by JD Lasica)